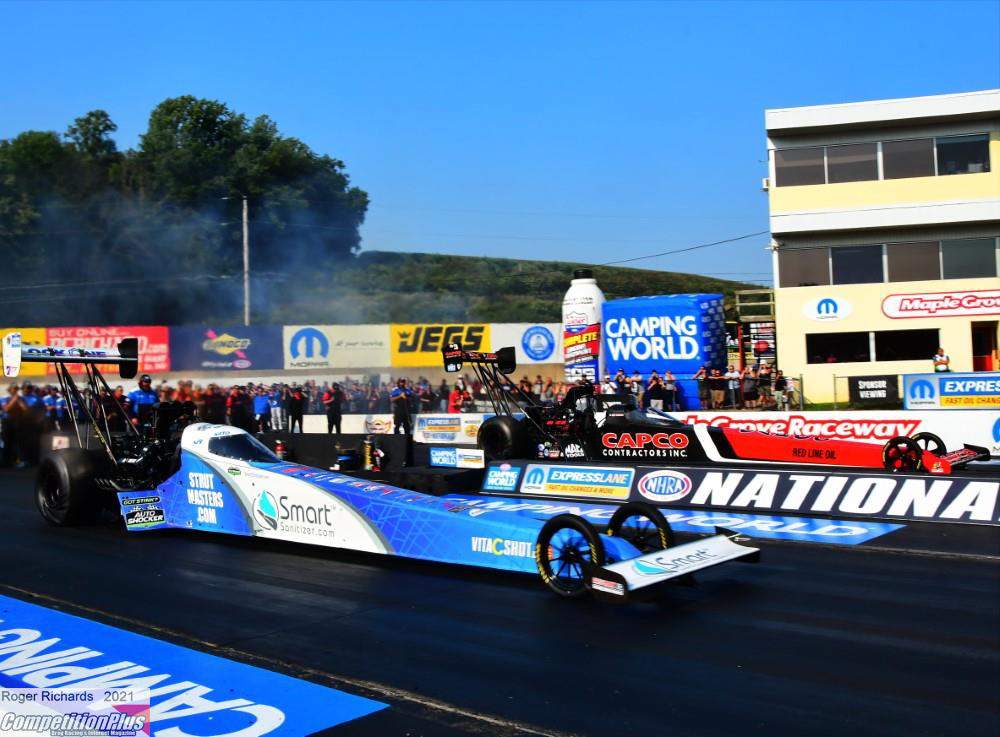 Reminded that he serves a valuable purpose in helping son Steve Torrence stay in command as he strives for a fourth consecutive NHRA Top Fuel championship, Mopar Express Lane Nationals winner Billy Torrence said Sunday, tongue in cheek, “I don’t care too much for the Loser Appreciation program, but you know, we’ll take it.”

Truth is, he was elated to keep final-round opponent Justin Ashley from getting any closer to Steve Torrence in the standings and did some reminding of his own: “Those Capco Boys will outrun you when it comes time.” 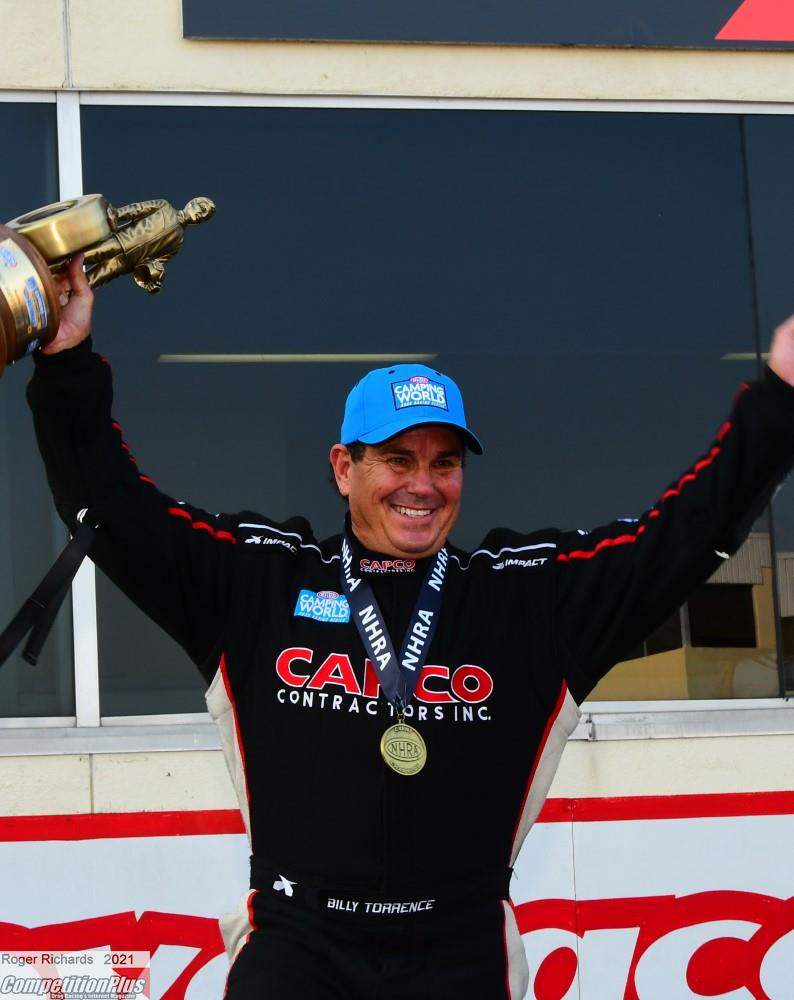 The Capco Contractors founder from Kilgore, Texas, proved that against Ashley in the final, knocking him off with a 3.720-second elapsed time at 326.08 mph on the 1,000-foot Maple Grove Raceway course near Reading, Pa. Ashley, of Plainview, N.Y., challenged with a 3.784, 313.22 in the Smart Sanitizer Dragster powered by Strutmasters.com.

Winning at this kickoff of the Camping World Drag Racing Series’ 2021 Countdown to the Championship definitely was all fun and games for Billy Torrence, the No. 8-ranked driver.

“I love to race,” he said. “I get out and race my Super Comp car as often as I can. Just racing is fun. I think Steve and, we’d foot-race if that’s all we had. We’d race wheelbarrows, motorcycles, bicycles, you name it. We’re going to get out and race.

“But I get out here, and these guys [his Jason McCulloch-led crew] just make me look good. I try to do the best I can. There are some people who are race-car drivers, and I can just drive a race car. That’s basically it. I had a good car. I'm certainly the weak link in my car and the Capco Boys and the Good Lord was riding with me. Made me look good in the end. I'm not near the driver to get around,” Torrence said. “But I still have a good time. And like Steve, I’m going to take all the wins I can get.”

By .0228 of a second, Billy Torrence preserved the points lead for his son, who fell to Ashley in a semifinal pedal-job attempt but benefited, too, from second-place Brittany Force’s semifinal-round loss. And the winner had a plan for his son to repay him for the favor.

“I’ll be at work in the morning at 5 o’clock. Steve had better not be far behind me,” Dad said.

Actually, Billy Torrence worked several hours Friday in Texas before flying here in the afternoon and nailing down the provisional No. 5 spot in the lineup. And after Sunday’s victory – his second of the season and eighth overall – he expressed his passion for drag racing and put it in perspective.

“We could be running up and down one of them pipeline right-of-ways, welding piping. Just to get out here and hang out with everybody and race those cars, we’re going to be automatic having fun,” he said.”

And Monday at lunchtime they’ll be driving over to Tyler, Texas, to gather at El Charro, their favorite Mexican restaurant they visit following every family victory. So not much has changed.

Despite Brittany Force’s superb performance (No. 1 qualifier, setting low elapsed time of the season for the Top Fuel class at 3.655 seconds, clocking a track-record speed of 335.57 mph), Steve Torrence still leads the standings. Despite Justin Ashley buzzing through a stout line-up that included perennial powerhouses Doug Kalitta and Clay Millican and giving Billy Torrence a gritty run for his money, Steve Torrence still leads the standings and Ashley still is seeking his first victory of the year and second overall. And despite Josh Hart, Shawn Langdon, and Force engaging Billy Torrence in close matches throughout the day at Maple Grove, the 63-year-old head ‘Capco Boy” demonstrated once again that he can be a significant force in the series even though he was making just his 10th appearance in 14 races.

Top Fuel racer T.J. Zizzo coined the term “super part-timer,” and Billy Torrence certainly is one of them. He won the New England Nationals June 13 at Epping, N.H. and is perfect in two finals this season. After Sunday’s triumph, Billy Torrence is third in the standings as the series heads down South for this next weekend’s DeWalt Nationals at zMAX Dragway at Concord, N.C.

It’s conceivable he could win this championship, but, perhaps surprisingly, that’s not at all what he’s trying to do. He brought up the phrase “Loser Participation Program,” and this time he wasn’t kidding – maybe he wasn’t the first time, either. Like his more vocal son, he clearly doesn’t approve of the sentiment behind the Countdown, which negates all the advantage a driver goes out and earns – earns – during the regular season.

“I'm not an advocate of the loser participation program. I think I've started out about 900 points behind. That's kind of why I feel better. If I were to actually win the trophy, I'd give it away,” Torrence said.