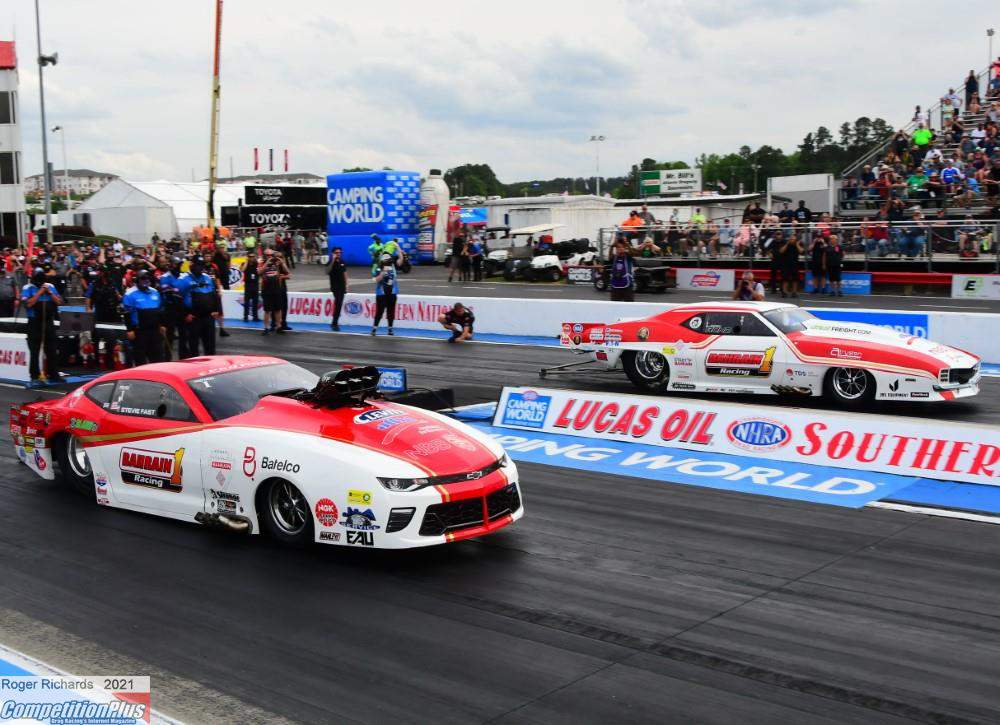 With Atlanta Dragway already scheduled for demolition and redevelopment later this year, a Canadian beat a native Georgian to go down in history as the final Pro Mod winner of the 40-year-old NHRA Southern Nationals.

Justin Bond of Mission, British Columbia, laid down a .036 holeshot against Evans, GA's "Stevie Fast" Jackson to earn an historic victory in the final round. It marked Bond's second NHRA Pro Mod win in four trips to the finals.

"As an old-school bracket racer I let go of the button and I looked over and knew I had the light," Bond said. "Then the shift light started coming on and I started plugging gears and I never really saw him out front of me.

"I did see him a little bit through my door window, but I was just paying attention to what's coming forward because the track’s a little bumpy in the shutdown. And when the crew got on the radio and started screaming, I said, 'Did I get him?' And they were screaming so much I figured I must have had him then."

Jackson left no doubt on who he blamed for the loss.

"That's pretty bad right there," he said. "That's about as bad as it gets when you call yourself a professional and can't drive the race car, it's tough."

After just two rounds of qualifying, Khalid al Balooshi earned the number-one start with a track record 5.71-seconds pass at 250.37 mph in his Procharger-equipped '19 Camaro. Jose Gonzalez came next, followed by Bond, Jackson and Mike Castellana to fill out the top five.

A wild ride off the start saw Balooshi take out a timing block and eliminate himself from competition.

"I don't know, maybe we broke something, but something happened that made it stick to the right. I tried to bring it back, but with the (front) tires in the air I missed it and we hit the cone," the Dubai-based driver recalled.

"It was awesome to have an all-team final. I was glad to see no matter what happened, a Bahrain 1 car would win, but it stings pretty bad when (crew chief) Billy (Stocklin) gives me a car as good as what we have and I didn't close the deal. It stings," Jackson said later.

"But over the course of the season it's probably the best thing that could happen because when we get to Charlotte, I'm going to tear their heads off," he added. "But for right now, it stings pretty bad."

Bond gave credit for the win to crew chief Brad Personett, car chief Chris Johnson and the rest of his Bahrain 1 Racing team.

"I truly believe this, and this isn't biased; I honestly believe I have the best crew there is at this facility, working on my car, tuning my car. I have the luxury of going out there knowing the car is going to do its thing. I've just got to do my thing."

Bond added he enjoys, too, the notoriety of being a unique race winner.

"Yeah, I've got a couple pieces now. I was the first Procharger car to ever win in Pro Mod and now I'm the last Pro Mod winner ever in Atlanta. So I think that's pretty cool."