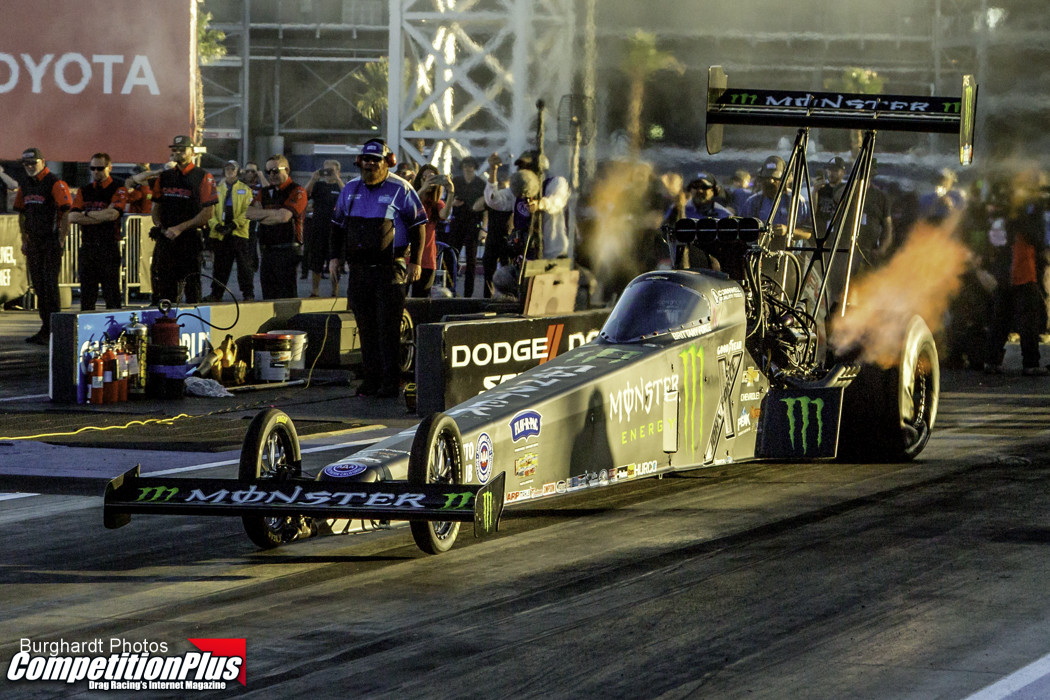 “That was a great run for us and a great start,” Force said. “We’ve had success here in Vegas. Back in 2019 we won the event. We are in the hunt for this thing and that’s exciting for all of us. We are going to throw down and we are going to go for it. It’s not going to be easy. It’s going to be tough. There are two races left and we are going to grab as many points as we can. So, every single run matters. We are going to throwdown every single run we can and see how many points we cab grab and race day we start all over. We are looking for four win lights. We want to get this thing done, but we need to win here.”

Force is trying collect her 12th No. 1 qualifying spot this season in 19 races.

Force is two No. 1 qualifiers away from equaling the Top Fuel category record of 13 in a season set by Tony Schumacher in 2006 and from tying the JFR team record of 13 set by John Force in 1996.

“That’s a huge accomplishment for our whole team and look at the No. 1 qualifiers we have collected, that’s huge,” Force said. “That’s something to be proud of and that has (crew chief) David Grubnic written all over it. But it is about all these guys. I’m proud to be teamed up with them and yes, those No. 1 qualifiers are great, but what is really great is standing in that winner’s circle on Sunday. That’s what we are going for.”

Force is in the mix to earn her second Top Fuel world championship to add to her first, which came in 2017. With two races left in the NHRA Camping World Drag Racing Series Countdown to the Championship and currently No. 2 by just 73 points behind Steve Torrence, the reigning three-time world champ.

“We get two more qualifying runs Saturday, and we are hoping to repeat and step it up a little,” Force said. “Then, we want to go four rounds on Sunday. We want to win this thing (in Vegas) whether that get ahead of him or be right behind him. In 2017, we were chasing him the whole way and right now it is just one round at a time. That’s how I look at it. If you look at the big picture it does get really overwhelming. It is exciting and fun and I’m glad we are here.”

Qualifying at the Dodge//SRT NHRA Nationals at The Strip at Las Vegas Motor Speedway continues Saturday with sessions at 1 and 4:30 p.m. Sunday’s eliminations are slated to begin at 11 a.m. Television coverage of the event will be featured on FOX Sports 1 (FS1) and continues with a second qualifying show Sunday at 4 p.m. ET followed by the eliminations show at 5 p.m. ET on FOX Sports 1.

“The last few years it has come down to Steve and Kalitta and our team,” Force said. “It is crazy. I look back at 2017 and that seems like yesterday when Steve and I were battling it out. We won at (Pomona) and got the championship. I have to look at it one step at a time. We want to win here. We need to win here if we want a shot at the title.”

The season-ending race is the Auto Club NHRA Finals in Pomona, Calif., Nov. 11-14.