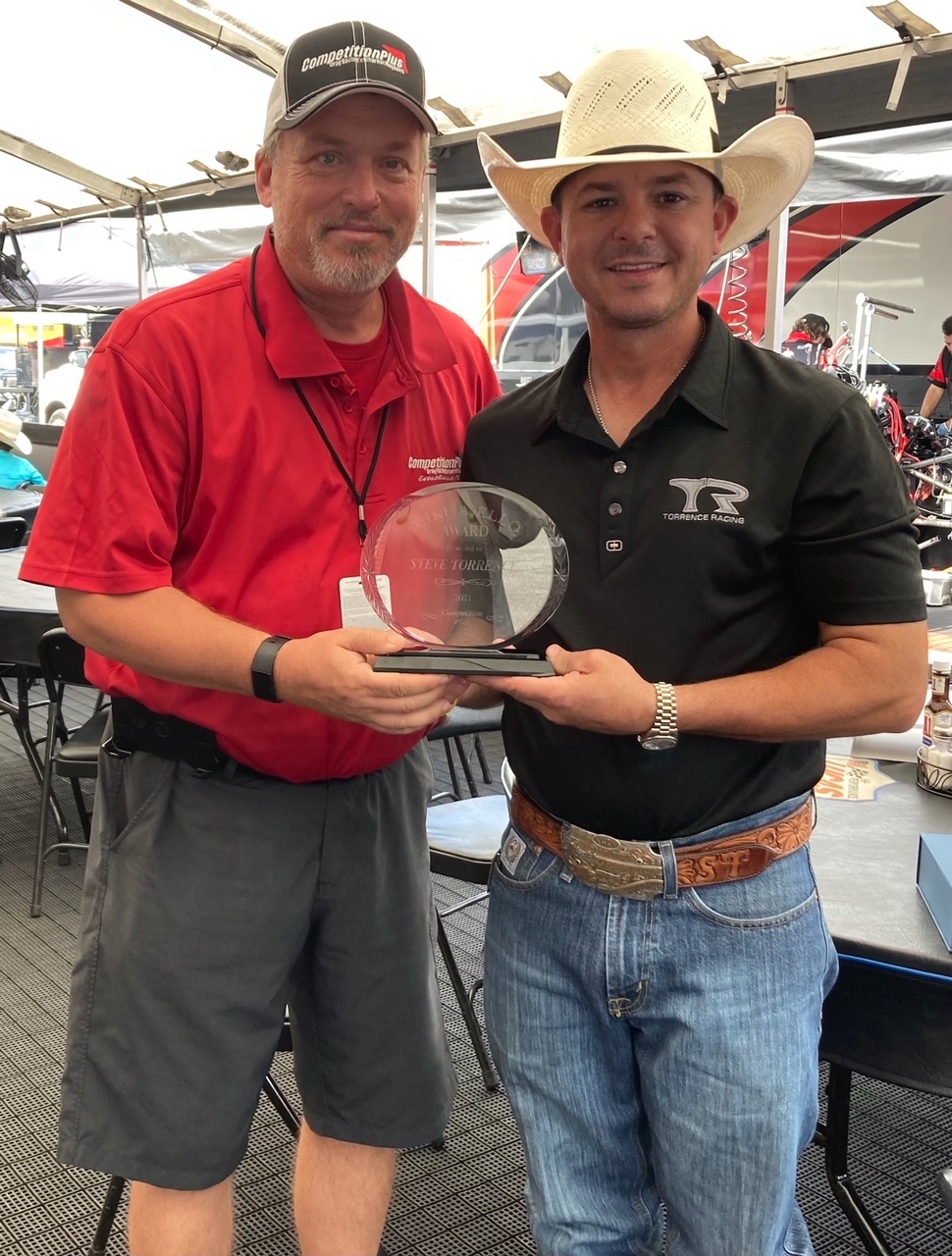 Current and three-time Top Fuel champion Steve Torrence is the 2021 recipient of the Mike Aiello Award.

CompetitionPlus.com owner and publisher Bobby Bennett made the surprise presentation before eliminations Sunday to Torrence during the NHRA FallNationals at Texas Motorplex at Ennis, near Dallas.

The Capco Contractors Dragster driver from Kilgore, Texas, is the 16th recipient of the award that honors Aiello, the Houston native and standout college athlete at Texas Tech University who was a longtime drag-racing fan and former National Hot Rod Association Pro Stock crew member.

The honor, commonly referred to as "The Spirit of Drag Racing Award,” recognizes someone who has persevered and remained positive in spite of hardship.

Torrence, 38, has survived Hodgkin’s Lymphoma as a teenager and a 2016 heart attack that was attributed to the effects of that cancer treatment.

"I had a pretty good understanding of the concept of death before," Torrence told Bennett back in 2016. "When I had cancer, I knew I was sick, and you deal with it. You experience a long, drawn-out process. And then going through this, you're only one heartbeat away from not being here.

That experience, Torrence said, “added another dimension to my perspective on life. I was very thankful and very appreciative for having a second chance. But then when you get it again, a third chance here . . . I think I'm far more fortunate and blessed than I should ever be. But it makes you think, 'Wow, what am I doing here? I mean, you’re only one beat away from not being here anymore. I need to make sure I leave a better mark in every aspect of my life."

Torrence and wife Natalie became parents this April 7 – 10 days before Dad’s birthday – to daughter Haven Charli. Since then, he has posted nine victories in 15 races and led the standings virtually all season.

Finishing second in a 2017 title chase that slipped through his hands on the final day of the season stimulated his unprecedented 2018 Countdown sweep to ensure his first championship. He repeated in 2019, then in non-Countdown format earned his third Top Fuel crown last season.

A straight-talking Texan who owns his actions, Torrence also has taken responsibility and humbled himself to apologize for moments that characterized “not one of my prouder days,” saying, “I want to thank my Lord and Savior, Jesus Christ, because I fall short a lot and everybody sees it. I get it. It ain't something I'm proud of. That's what I really worked on for the last couple of seasons: not so much wearing my heart on my sleeve and trying to control my emotions better in a competition situation.” Before that, he said, “I had a bad attitude in 2017.” Correcting that propelled him to his three championships.

Off the racetrack, Torrence has been a strong drag-racing ambassador. In 2019, he helped Kilgore College, his alma mater (2001), announce an incentive for students to excel in the classroom.  Kilgore College President Brenda Kays said at the time, “We couldn’t think of anyone better than Steve Torrence to help us kick this event off. Steve is the perfect example of someone who has worked diligently, attained an education, persevered, and has succeeded at the highest level in his chosen career field. He is a true role model for our students as they persevere and achieve success with their educational and career goals.”

He was recognized on the floor of the Texas State House of Representatives in March 2019 for his racing accomplishments.

And earlier this year, he invited Texas Gov. Greg Abbott to sit in the cockpit of his Capco Contractors Dragster to promote the Texas Fall Nationals and its week-long Stampede of Speed event that the governor called “a major boost to travel and tourism and to our economy.” From the race-car seat, Gov. Abbott signed a bill providing funding to the Texas Motorplex under the state’s Major Events Reimbursement Program. He said the gesture is aimed at “attracting even more economic activity to the Lone Star State.”

Torrence entered the Texas Fall Nationals with 49 victories, more than 400 career round-wins (403), and a 46-7 race-day record. His 49 trophies tie him with veteran standout Doug Kalitta for fifth place on the class’ all-time victories list. He also earned the 2005 Top Alcohol Dragster national title in the Lucas Oil Drag Racing Series, the first ever to achieve championships in both of those categories.