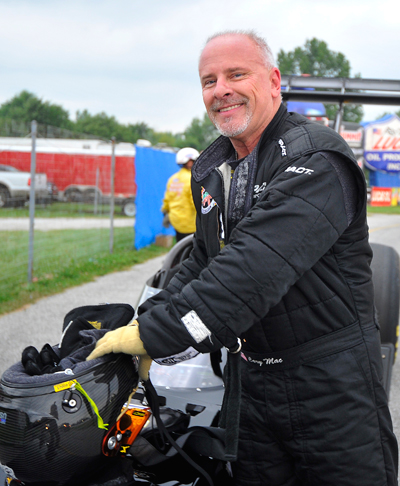 As the NHRA Camping World Virginia NHRA Nationals rolls into Richmond, Va., this weekend, what better time to turn back the Hot Tub Time Machine and visit with Cory McClenathan.

“Every time we went to Richmond, it was just one of those tracks I really liked and literally everything always went our way,” McClenathan said in an interview with CompetiionPlus.com. “We worked for it and at the same time everybody gets a lucky one here and there and I’m sure I did during those four times. At the same time, it was really cool to go to a track where I was thinking I’m almost going to win this for sure. You get to be that way with those tracks. The ones you struggle on, you’re like 'God, just let me go a couple rounds.'”

McClenathan has 34 career NHRA Top Fuel wins in his career.

When Cory Mac, as he was known, first started it was with his own team and back in 1995, he had standout crew chiefs Lee Beard and Mike Green doing the tuning. That was for the McDonald’s team headed up by Super Bowl winning coach Joe Gibbs.

“We would go back to the books from a year prior, depending on how many things the crew chiefs and everybody else had come up with,” McClenathan said. It would give you a starting point, and I’ve seen it work for us all the time and that doesn't always happen that way, but it still gives you something to go off for the first pass.”

McClenathan acknowledged the weather in Richmond made it tricky to find success.

“The weather changed a lot there, so you had to be ready for it all weekend,” McClenathan said. “But the first couple of qualifying rounds in the past have always been a little bit tough, waiting for the track to come around. So, we would step lightly the first day and we'd end up No. 1 qualifier, something like that. Or at least go A to B and then see what everybody else does. Then, the second day it would start to come in pretty good. But some of those were late night qualifying sessions, and you know as well as I do, if you can do it late at night, it's going to go fast.”

When McClenathan won Richmond in 2006 it was with the Carrier brothers Andy and Mark.

“It’s kind of cool (when you win with different teams), because when you're able to see winners in pictures later on down the road, it's the same place but it’s different car every time almost,” McClenathan said. “That's when you get that feeling like, ‘Man, I really had that track figured out. I had a lot of fun with the Carrier brothers.”

Cory Mac will not be competing in Richmond this weekend, but Virginia Motorsports Park always will hold a special place in his heart.

“Definitely, anywhere you win that much you just got a good feeling going into it,” McClenathan said. “And you don't want to end up behind the eight ball by missing out on the first or second qualifying pass and not figure it out because the crew chiefs step lightly on Saturday.”

When Cory Mac was driving for the Gibbs-led McDonald’s team he was a fan-favorite because Gibbs won Super Bowls with the Washington Redskins.

“Being with Gibbs every time I went there, I was wearing a Redskins’ helmet,” McClenathan said. “He flew in, he helicoptered in because he was somewhere else at a race. He helicoptered in for the winner’s circle pictures, he walked up to me and had me sign the helmet and he signed it, and he took it and I never saw it again. They did go crazy because that's Joe Gibbs. That was Redskins country to them.”

Cory Mac said the 2006 victory in Richmond also had special meaning to him.

“A big thing there being in Virginia FRAM had a big plant out there at the time,” McClenathan said. “So, they had a lot of people at the track, they would call that their hometown, and with the Carrier Boys and myself, we won that. That was their very first win. We were sponsored by FRAM and that was a big day for us.”

On his personal racing front, McClenathan has things on his schedule.

“I am going to keep on running the Nostalgia Funny Car,” McClenathan said. “People love seeing the Mac Attack back out there. We're going testing in Sacramento (with the Nostalgia Funny Car) before the next race, but I believe it'll be later in July (to race again). It is a handful and I'm just now getting to figure that out. This weekend, I will be racing in the Pro Buggy class in Glen Helen Raceway (in San Bernardino, Calif.) and I’m also working on putting some other things together.”