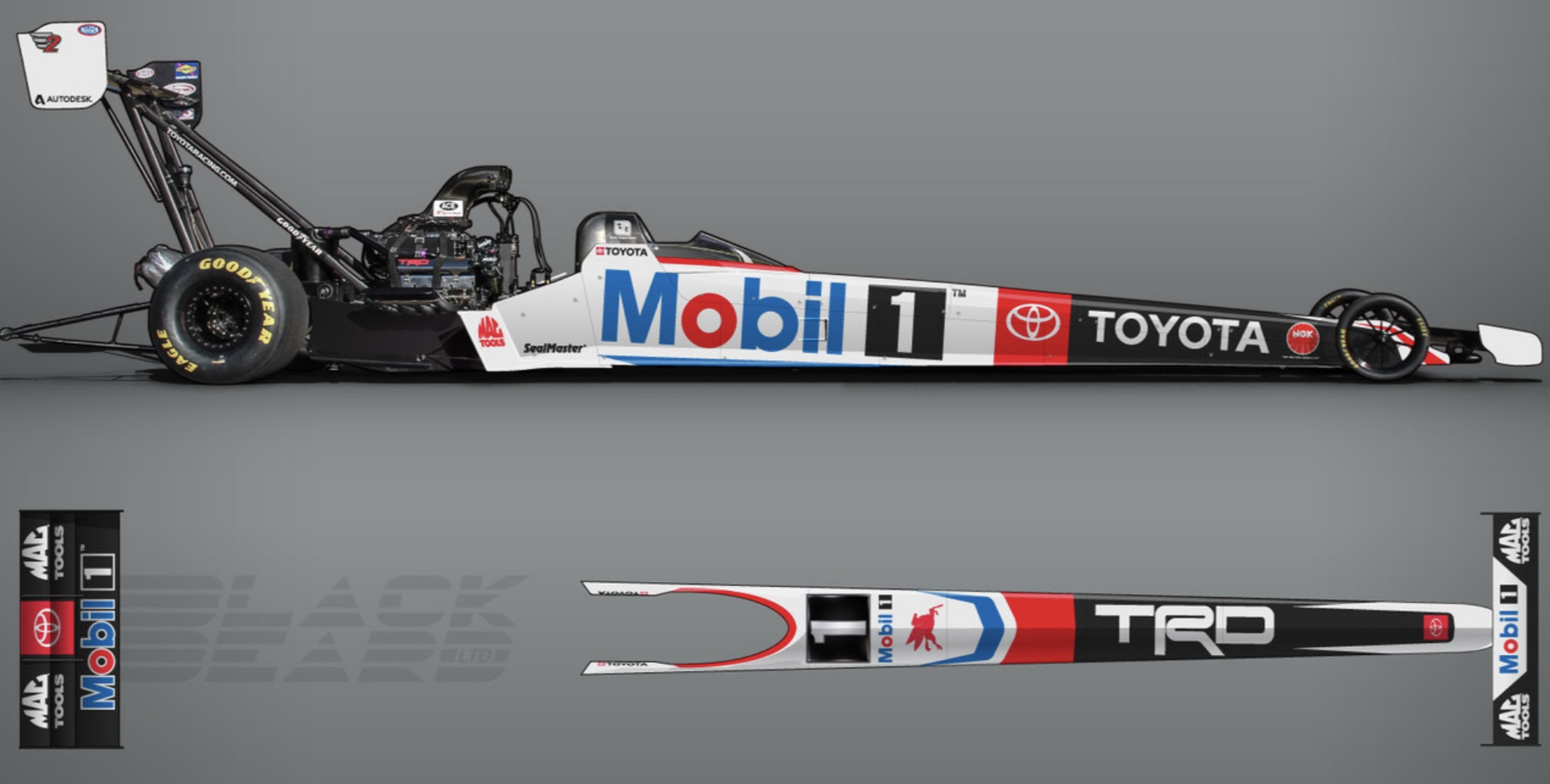 Technical alliance partners Toyota Racing Development (TRD) and the Mobil 1 brand will raise their profile with multi-time world championship drag racing team Kalitta Motorsports during the NHRA SpringNationals, May 21-23 with primary sponsorship on Doug Kalitta’s Top Fuel dragster. Since 2019 when the relationship was announced ExxonMobil, TRD and Kalitta Motorsports have worked together to develop next-generation Mobil 1 synthetic lubricants to improve engine and gearbox performance.

“Our relationship with Mobil 1 and TRD has been incredibly beneficial on and off the track,” said Chad Head, Kalitta Motorsports General Manager. “The engineering support has been instrumental in improved performance for our three race cars and we have been able to give Mobil 1 feedback on their oil under the most stressful environment possible. We put a tremendous amount of stress on our motors and there is no way we could be as successful as we have been without the support and input from Mobil 1 and TRD.”

The past two seasons have seen Kalitta Motorsports score wins at some of the most prestigious NHRA national events including Doug Kalitta’s season opening win in Top Fuel at the 2020 NHRA Winternationals, Shawn Langdon’s Top Fuel win at the U.S. Nationals in 2020 and this season’s Gatornationals win J.R. Todd in the DHL Toyota Camry Funny Car.

“The extreme conditions of NHRA racing is a perfect place to showcase the superior performance of our advanced Mobil 1 synthetic lubricant technologies.  Being in the sport with such outstanding partners as Toyota and Kalitta Motorsports is a great honor for the Mobil 1 brand,” said Andrew Hanna, ExxonMobil Global Motorsports and Sponsorships.

The relationship between ExxonMobil and Toyota along with TRD (Toyota Racing Development) extends through many various motorsports platforms as well as into production Toyota vehicles. The ongoing work of the talented men and women at TRD and ExxonMobil continue to enhance the on-track product and put Toyota’s in victory lane across the country.

“We’re so proud of the relationship that’s been formed between TRD and ExxonMobil,” said David Wilson, president of TRD. “The knowledge of two engineering parties who are focused on not only winning week to week, but also continuous improvement of the product and bringing reliability, durability and performance to the track is something special that we’ve formed together. Seeing our logos side-by-side on the Kalitta Motorsports Top Fuel Toyota in Houston is definitely something we’re excited to see.”

During the SpringNationals Kalitta’s entire team will be sporting Mobil 1 branded crew shirts and ExxonMobil will be utilizing the pit side VIP hospitality area throughout the event.