RELATED STORY - THE GARUANTEE WAS THE DIFFERENCE 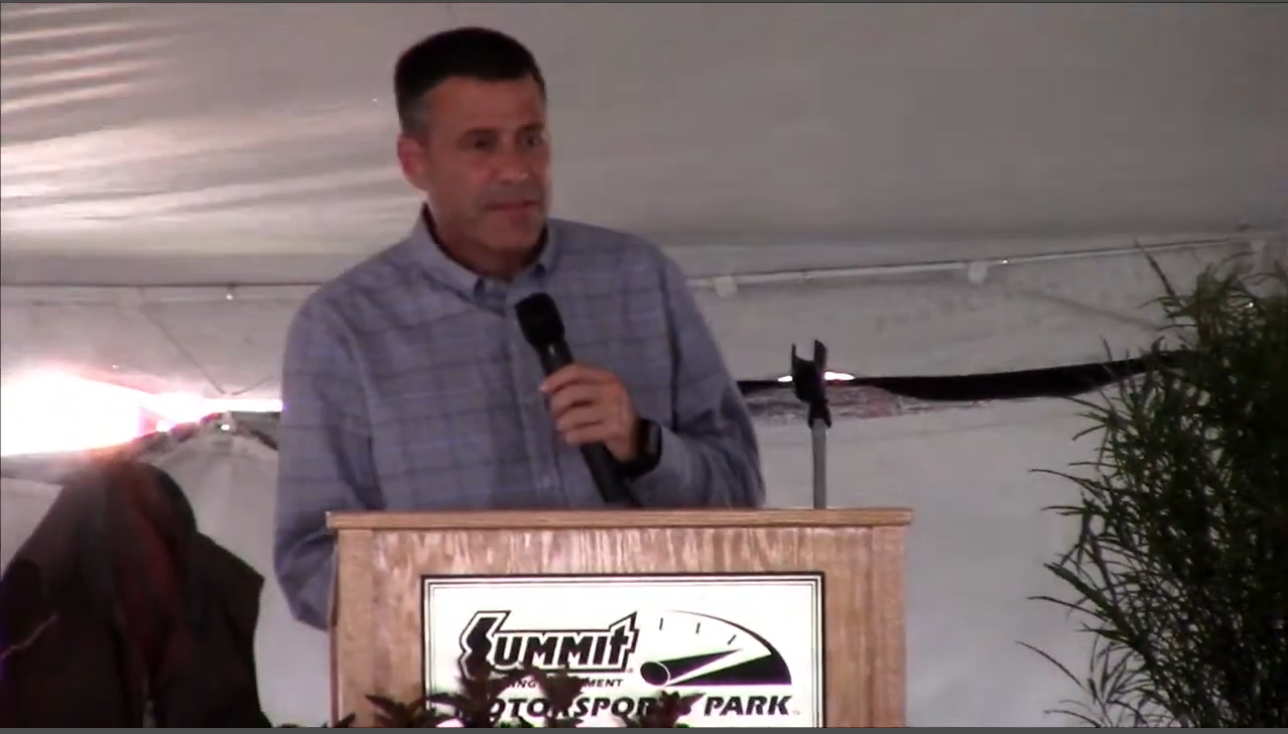 Bill Bader Sr. was alive in spirit vividly for almost two hours on the grounds of Summit Motorsports Park, the track he made famous outside of Cleveland, Ohio.

Bader passed away on June 26, 2022, following an accident on his property in Idaho. His passing came on the final day of the Summit NHRA Nationals in Norwalk, Ohio.

Family, friends, and associates came together under a massive tent to memorialize the indelible mark of the man who lived by guaranteeing and delivering customer satisfaction to the highest level.

The event started six minutes late, and no one was bothered in the least.

At least one person would have been angered, event emcee Bill Bader Jr. proclaimed.

"My dad would be so pissed," Bader said with a smile, noting his dad's penchant for details.

"I woke up today and felt my dad would want me to smile today," Bader continued, voice cracking with emotion. "I rarely did. I'm intense. I'm on a mission, usually tearing through something. My first thought was to pause and take a smile. That's my mission today."

One by one, family and friends took the stage to offer their fond memories of Bill Bader Sr.

There was no doubt the elder Bader was intense to the max, as sometimes hilarious moments in working side-by-side many described as the PT Barnum of Drag Racing promoters and his penchant for loyalty and detail. 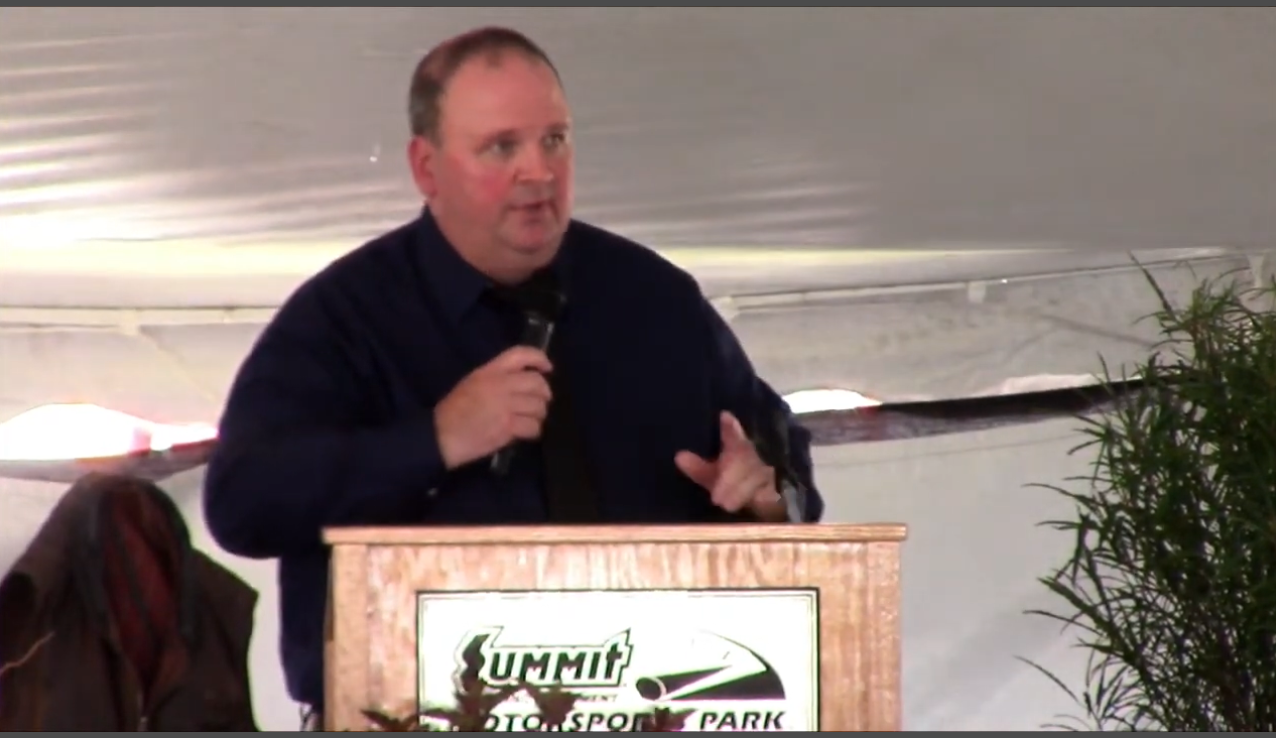 Scooter Peaco was one of those who shared one of his more entertaining moments when he told the story of his introduction to Bill Bader Sr. when applying for an internship. As he pointed out, it was only once he convinced Bill that an intern works for free that he secured his role.

It was a role he nearly lost one day over the Star Spangled Banner one Wednesday night while announcing at the track.

Peaco had taken some artistic liberty in running a previous race and chose to play the Whitney Houston version of the Star Spangled Banner. In a meeting, Bill expressed his disdain for the version and emphatically pointed out to Peaco that he should stick to the original cut.

Peaco took Bill's order as a suggestion and decided to once again stick to the Houston version.

Peaco figured he was in the clear when he watched Bill leave his office, get in the car and seemingly depart the premises. However, Bill hadn't left, and no sooner than the last note had played than the angry boss stormed the tower.

"It was a look and a pace I knew I didn't like," Peaco recalled. "He had a look like I had just played the Russian National Anthem. I figured I had about sixty seconds to live, and I had better come up with something quick."

Peaco said he watched in horror as Bill grabbed the CD and "beat the tar out of that thing."

"No inanimate object should be beaten like he beat that [CD]. He threw it across the room, walked over and picked it up, and threw it again. He was smashing it with his hand. He finished by throwing it on the ground and jumping up and down on it with both feet."

Peaco figured his internship was over and believed what was to come out of his mouth had better be the right response, or his mortality was in question.

"I picked up the CD and in my most sarcastic voice as I showed him, 'You didn't even put a scratch on that thing," Peaco said.

Bill smiled, started laughing hysterically and grabbed the CD. Smashed it in half and said, "Now I'm going home. Have a good race. It was then that I knew I was going to be a friend for life."

It was as if there was a room full of Bill stories, and all could relate.

Force during a Night Under Fire event didn't have a show fitting of a champion, and Bill let him know it.

"I couldn't make two runs past half-track," Force admitted. "Bader came up to me and said, 'That's what I pay you for?"

Force said Bill reminded him, "We are in the entertainment business, and you don't seem to get it."

"I tried to tell him that we were going for low elapsed time. I told him to cut my money. He wouldn't, of course. Entertain people he did."

Millican's moment was one of learning respect for the fans, the paying customer.

Millican was racing IHRA Top Fuel and had just procured his first low elapsed time. Bill was the president of the IHRA.

"I had my sunglasses on, and I'm just a signing ... there's crowd," Millican recalled. "Bill came up as he always did and gave me a little kiss. He leaned over in my ear and whispered, 'Is someone paying you to wear those freaking sunglasses?" 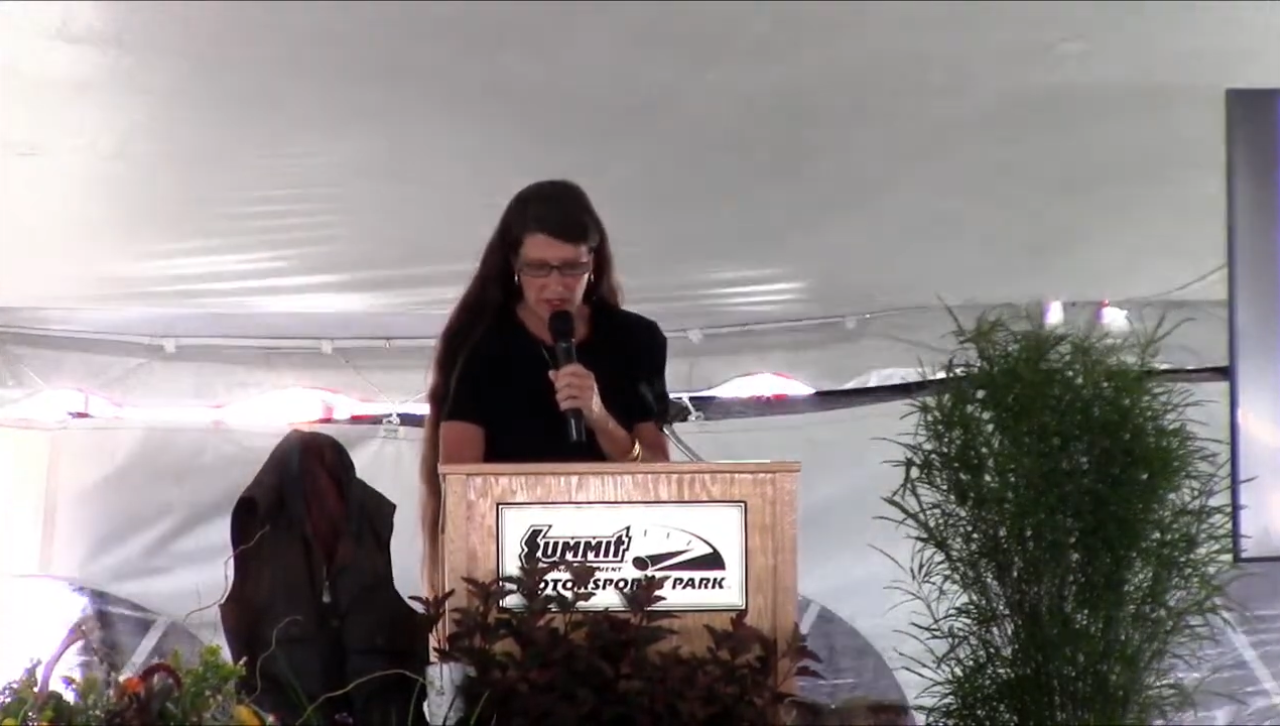 Millican paused and responded, "No, sir."

Bill continued, "Don't let me ever see you wearing them signing autographs again. These people paid their hard-earned money to come to see you, and they need to look you in the eye. I never forgot that lesson."

Bill's immediate family shared stories of his faith and love for them.

"None of you know what it was like to be Daddy's little girl," daughter Bobbi said. "I am very grateful that my dad was my hero, my best friend, and the person I looked up to for my entire life. I was Daddy's little girl when I went someplace; I got to hold his hand. I got to smile with him. I got to share stories.

"I got to come out here with my homecoming date ... with my prom date ... to get a picture with my dad and my date. I wasn't ever going to let that go without having a picture.

"When I needed advice, tough advice ... Dad never sugarcoated anything. He always gave me the cold hard facts regardless of my feelings. Most of the time, I didn't want to hear it, especially the way he presented it. He gave me solid advice and knew what needed to be done."

Wife Debbie shared with the attendees how in the last years of his life, Bill had come to total peace in his faith, walk with God and lost years of fatherhood.

"About two months before the accident that took his life, Bill and I had a conversation that was so compelling that I will never forget it," Debbie said.

The conversation took many twists and turns with a purpose.

"[Bill said] My faith is absolute," she said of the conversation. "It cannot be questioned. If challenged, it will not falter. I know the Lord. I love the Lord, and He loves me."

"[Bill] said, 'Look at my life. My children, I finally got a chance to know them. They know me and love me. I love it; I got a second chance. I never knew them when they were little; I was too busy working. I missed the biggest part of those formative years. I got to know them, and they are amazing. I know my grandchildren at a much younger age than I knew my kids. 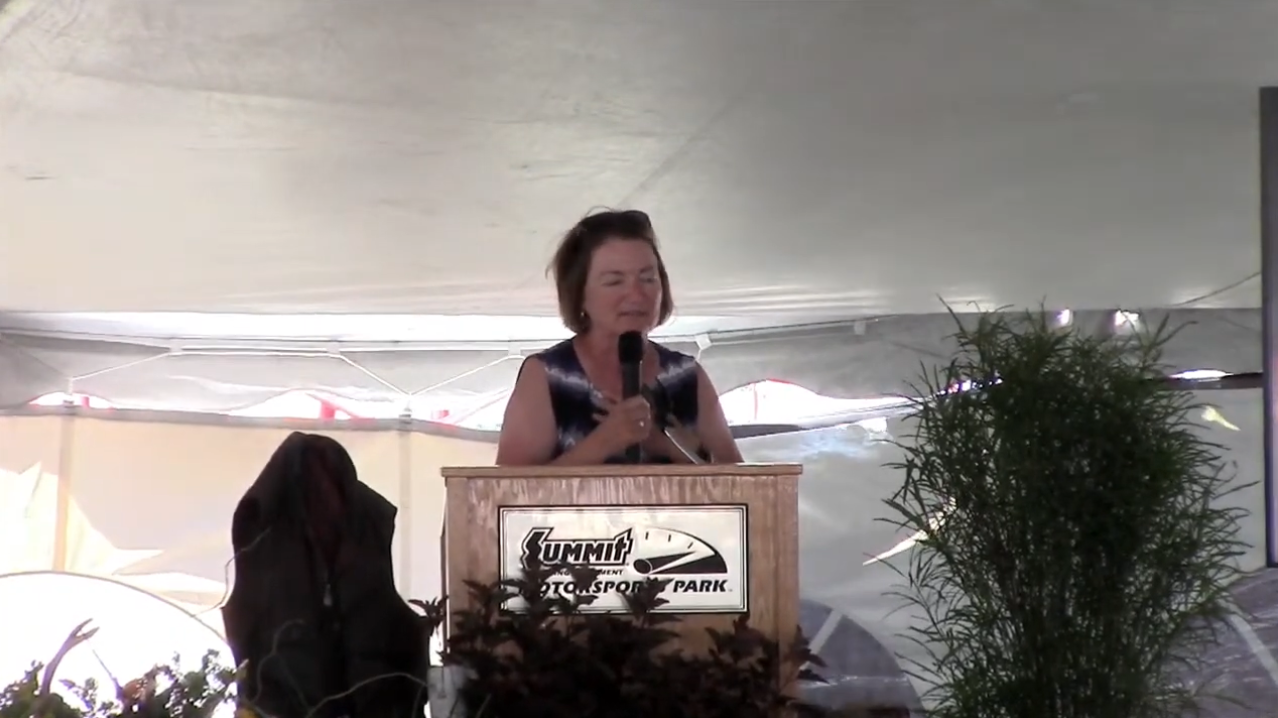 Debbie went on to reveal Bill's passion for his friends.

The answer was nobody. He loved everyone.

Debbie beamed as she shared how she and Bill left nothing on the table.

"I gave it all, and he gave it all," she reflected. "We both put everything into the relationship that we had. We are incredibly fortunate because as we were living it, we knew we were fortunate."

Billy closed the program with a heartfelt story of making a wrong right for his father.

Bill had gone to then NHRA Division 3 Director Bob Daniels in 1980 to lobby for a national event for his then Norwalk Raceway Park. He was told that he would never get an NHRA national event.

Bill went to IHRA and got his national event. He grew the event to an outrageous level.

When Bill retired from the IHRA and drag racing in general, it was then NHRA President Tom Compton who called to celebrate the golden achievement. In the conversation, Bill learned that while he was the leader of the IHRA, Billy was chasing an NHRA national event. 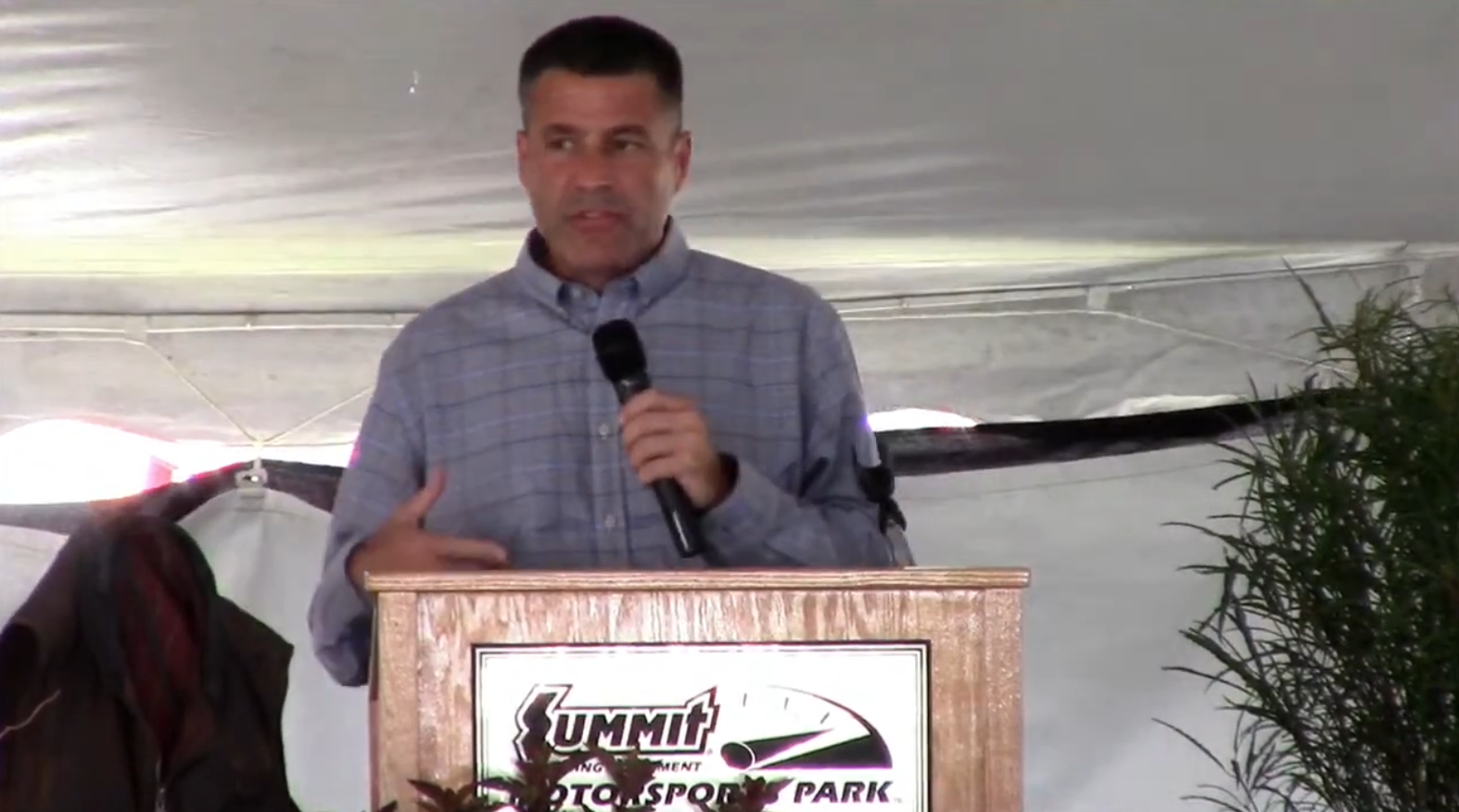 "My father called me with his lip pulled back ... spit coming through the phone ... and asked, 'What the F are you doing?" Billy recalled. "It will never happen.

Billy said that was all the motivation he needed.

The Norwalk facility moved to NHRA. Billy brought in his dad and gave him a $4 Million budget, but that went out the window as Bill ballooned the budget to double the amount.

"He had one job," Billy said as the crowd erupted in laughter.

Billy paused as he described over-the-top improvements his dad orchestrated, and in the end, the first race was a rousing success.

"I stood out on that track on Sunday for the first pair of fuel cars, and I said, 'Dad, you got your NHRA national event," Billy described, voice once again cracking with emotion. "That's why I did it. I didn't do it for the money; I did it for my dad."

In the end, it was Debbie who shared the final words of the conversation, which summed up Bill Bader Sr.'s life to a point.

"What else do I need?" Bill asked her.

Nothing, Big Guy, you lived life to the fullest.