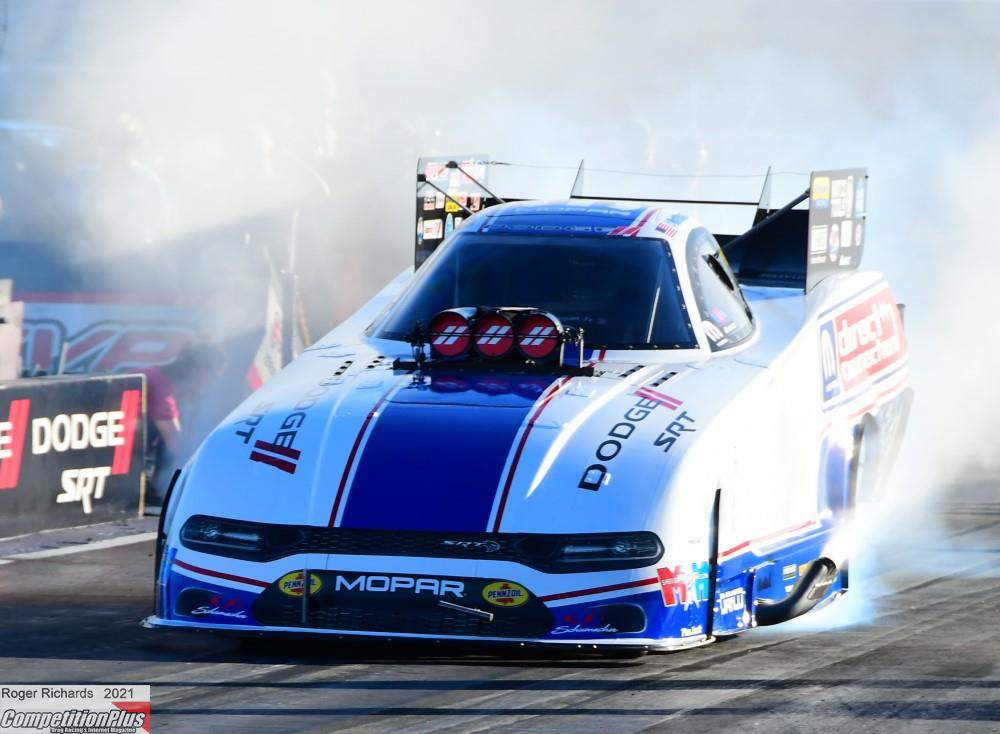 Matt Hagan had a chance to take the Funny Car lead in Friday qualifying. But neither he nor Don Schumacher Racing (DSR) colleague Ron Capps, who had a one-point advantage over him, got a single bonus point as both of their Dodge Chargers failed to make it into the top three in the provisional line-up. Hagan muscled to fourth place in his Mopar Dodge Charger SRT Hellcat Redeye, but Capps didn’t cross the finish line under full power in his NAPA Dodge and was seventh.

Toyota Camry driver Alexis De Joria, Chevy’s John Force, and another Toyota racer, JR Todd – the top three Friday – sort of spoiled the streak for Tim Kuniskis, Dodge Brand CEO – Stellantis, who had said before qualifying began that he and his associates were “eager to return to Las Vegas for the Dodge//SRT Nationals and watch another exciting Funny Car championship play out with three of our brand’s drag-racing stars in the hunt.”

Of course, this was just the first of three scheduled qualifying runs this weekend, and the other near-the-top-running driver, Cruz Pedregon, and Force are tangling over fourth place in the standings.  Pedregon had traction problems on his first qualifying pass and wound up 16th, but no one is counting out the veteran and two-time champion. And Kuniskis said, "Our ultra-passionate Dodge drag-racing enthusiasts can expect to be treated to a great showcase of pure Dodge performance this weekend.”

Meanwhile, the suspense continues in the championship battle as Capps and Hagan each are poised to deliver Dodge//SRT and Mopar brands a seventh Funny Car title with the DSR team in 19 years.

Capps said, “I believe this type of scenario is what NHRA envisioned when they came up with the Countdown to the Championship format. We’ve talked all year about how 2021 has been one of the tightest Funny Car battles we’ve seen in a long time. And here we are, two races to go and we’ve got a pretty bunched-up field. Consistency has really been the key for our NAPA AUTO PARTS team. Qualifying high in the field and earning qualifying bonus points has helped put us in the points lead going into the Dodge//SRT Nationals presented by Pennzoil, and we’d love nothing more than to be able to shine for Dodge and Pennzoil at their event.

“We’ve got a great battle going on with our teammate Matt Hagan, and the other Funny Cars are nipping at our heels,” he said. “It definitely seems that this will be a pivotal race.”

It’s one of only two left to play out.

“It always seems that way when the points are tight, but our NAPA AutoCare team has given me a great car every weekend, and we’ve won some very big rounds in the Countdown,” Capps said. “And I have a feeling there will be more of that this weekend in Vegas.”

Hagan is the three-time and reigning champion (who secured his latest crown here at this venue), and he said, “I don't really approach this event any differently. I approach every round as if it's the most important round ever. I've done that all year long, but unfortunately, I can count six or seven races where we lost by just two- or three-thousandths of a second. It's nothing that we haven't dealt with before. I think every championship that I've won has come down to the last race in the semi-finals or finals. So why should this year be any different, right?

“I feel like [crew chief] Dickie Venables is going to be aggressive moving into these next two races. We're going to run hard and let the cards fall where they may,” he said. “But I'm excited about it. It's going to be fun. It's business as usual. We’re staying focused and will do the best job we can for our sponsors and our fans."

This year’s stop in Las Vegas comes in its traditional spot as the penultimate race in the Countdown to the Championship.

Todd, who as runner-up at Bristol, tossed a stink bomb into the crowd at the top of the heap and moved into third place, is just 83 points back. Pedregon and Force entered this race tied for fourth place, 101 points off the pace. But Force earned two qualifying bonus points Friday, edging him ahead of Pedregon for the moment.

Hagan, a 39-time winner, said, “I’ve got a lot of confidence [now]. Last year we won the race and the championship here, so we’ve done well here in the past. The track is great, and we feel good about everything, but it’s going to be a challenge. Capps was right there with us last year, and he’s back in the thick of it again. But if we can come out of Vegas with the lead, we’ll feel better heading into Pomona. We’ll just roll up and do the best job we can. The points have been changing around all year in Funny Car, and we’re just going to keep battling.

“We’ve got that mentality of we’re in a fight, so it’s time to bite down on that mouthpiece and just throw down,” he said. “I hope Dickie continues to be aggressive and I’m confident that’s going to be our mentality. That’s how we won the championship last year. We never let up, and I hope we keep that up. That’s the type of mentality we need to continue to have. But I’m enjoying all this and I’m not letting the pressure get to me. We’re ready to get after it this weekend.”

As he prepared for qualifying to start, Pedregon said, “I expect the Dodge//SRT Las Vegas Nationals to be a great race for competitors and fans alike. There are more cars in the hunt now, so I think that'll make for closer racing. And then Pomona is a points-and-a-half race. It'll make the champion really earn it before they close the deal.”

Todd said, “We were in a little better position in 2018. Going into the Countdown this year, I knew that we had a good enough car and team to contend for a championship. We have had some hiccups along the way, but we are still in the hunt.” He picked up a point Friday in qualifying.