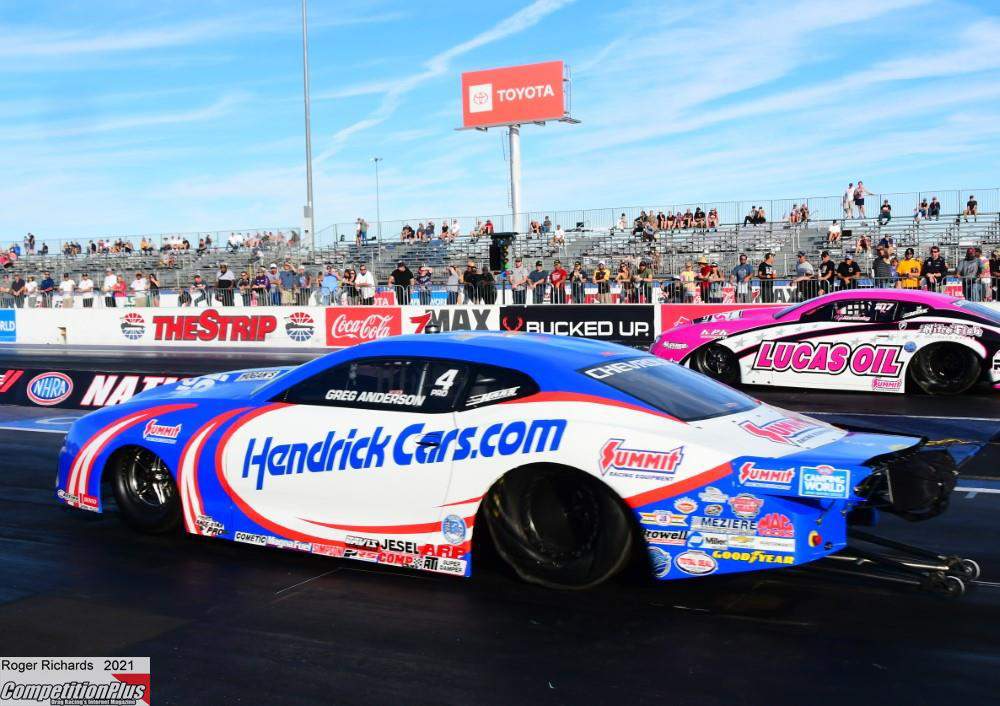 Greg Anderson is the gold standard when it comes to NHRA’s Pro Stock class.

Anderson is the all-time wins leader in the class with 98 national event titles.

Yet as good as Anderson has been, the star driver hasn’t won a world championship since 2010. Anderson has won four world crowns with the others coming from 2003-05.

Anderson is trying to end his championship drought in 2021 and he took a baby step in that direction at the Dodge//SRT NHRA Nationals presented by Pennzoil at the Strip at Las Vegas Motor Speedway, the second to last race of the year.

Anderson arrived in Vegas with an 81-point lead over second place Erica Enders in the points and upped that to 92 points with his qualifying bonus points. Enders, who drives for Elite Motorsports is a four-time world champion including the last two in a row.

Anderson faces Troy Coughlin, Enders’ teammate, in the first round. Coughlin purposely shut off early in his three qualifying runs to set up his match with Anderson.

This was Anderson’s 11th No. 1 qualifying position and the 117th of his decorated career.

“That was my goal coming in, I can’t control anything else,” Anderson said. “I can’t control what the other teams do. Everything worked out just exactly the way I figured it would. I have been saying it all year long you can’t worry about who you run first round. Anybody who qualifies in Pro Stock can pretty much beat anybody. I have a tough customer first round, but I consider them all tough customers. That’s the way it is and I’m good with it all. I’m proud of my team, we did all we could do. You never know when we get to Pomona if those little points will make a difference. I want everyone I can get and that’s what I have been trying to do.”

Being chased in the points in something Anderson welcomes.

“I would certainly rather be in my position than everybody else’s,” he said. “No lead is big enough I know that, and I know it can go away in a heartbeat. It can go away tomorrow. I’m going to try and win the race. Every race you come to win, and I have come to win. If I win, we will be looking good when we get to Pomona. If I don’t it will be a different story. It is really that simple. Anything less than a win will be a disappointment.”

The NHRA season concludes with the Auto Club Finals Nov. 11-14 in Pomona.

“It has been a neat season for me,” Anderson said. “I’m just so proud that I have on the side of my car (HendrickCars.com) and the association with Rick Hendrick. As soon as I got back to the pits (Saturday night) I got a text from him with a picture of Jim Campbell (the president of Chevrolet) who is one of Rick’s best buddies, was standing on the starting tonight with me for Q4.

“Timing is everything. I showed off a little bit for the guys who pay the bills. They are happy right now and tomorrow would certainly make them happier if I can find a way to go the distance. It’s tough right now because over on the NASCAR side, they are dominating. They are kings. They are heroes. I feel like I’m not holding my end of the bargain up unless I win every race. I have to find a way to win to keep pace with the other side of the team. That’s the situation I’m in and I like it.”