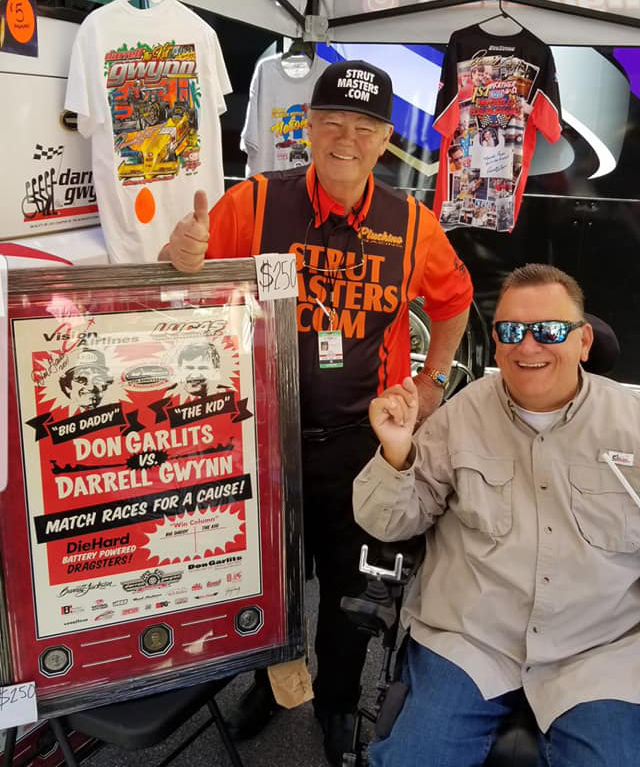 The PDRA's 2021 season kicked off Friday with East Coast Nationals qualifying playing to a sizable crowd of fans and a pit area overflowing with racers.

Among those on hand for Friday's action was former NHRA Top Alcohol Dragster champion Darrell Gwynn. It was the Floridian's first look at PDRA competition as well as his first peek at GALOT Motorsports Park. To say he was impressed would be an understatement.

"I sat in the bleachers a little bit ago and watched the Pro Mods. I can't get enough of them," he said of the PDRA's Pro Nitrous and Pro Boost divisions. "They really, really put on a helluva show, with the front end in the air most of the way down the racetrack. That's good racing.

Gwynn, of course, would go on to race Top Fuel, and he notched 18 NHRA victories in that class before a 1990 crash in England took part of his left arm and left him paralyzed.

Gwynn's appearance at GALOT is part of what he calls a "road trip" that will also include stops at the NHRA Southern (April 30-May 2) and 4-Wide nationals (May 14-16). He also attended a friend's wedding and "had to see some people" in the Carolinas, he said.

The last time a member of the Gwynn clan was at GALOT was in 1973, when the track was known as Dunn-Benson Dragstrip (and "Broadslab" to locals). His father, Jerry, a stalwart in the NHRA Pro Comp ranks (now split into Top Alcohol Funny Car and Top Alcohol Dragster), raced here before his son hit puberty. It was a ramshackle, bare-bones facility at the time.

"My dad said, 'Son, I hope it's a lot better than when I was there. That place was the worst I'd ever been to at the time,' " Darrell recounted. "I guess it was really narrow, and it only had one light at the starting line beaming down the racetrack to show you where to go.

"And they said that they asked you at the gate if you had a gun -- and if you didn't have one, they'd give you one. This place was crazy back in the day."

That's no longer the case, not since Earl Wells bought the property, leveled the entire facility and started from scratch. GALOT Motorsports Park opened in 2016 following a two-year facelift and is arguably as nice a dragstrip as there is in the country.

"They've done a fine job, and this is a really, really nice racetrack -- beautiful racetrack," Gwynn said. "Beautiful pit area, nice people ... everything. I love this part of the country."

In addition to top-flight seating and lighting, GALOT offers racers max traction and smoothness. Gwynn was eager to see one of his favorite classes in action on the super-quick eighth-mile.

"When I'm at the NHRA races, I love going up and watching the Pro Mods," he said. "I still don't have it all figured out, all the PDRA classes. I quasi have it figured out based on sound, but when they run, I can tell which is the nitrous car, the turbo car, the ProCharger car or obviously the screw blower cars. I love the screw blower cars -- they're beautiful that way.

"Top Fuel dragsters, Funny Car -- they have nothing on any of these cars. These cars are pieces of art.

But the gap between him and the rest of the top half of the field was virtually non-existent. The next five in line -- Ron Muenks, Tommy Franklin, Dean Marinis and Tony Wilson -- were within 5/100ths of a second of Halsey.

The Pro Boost field was even tighter. Todd Tutterow's 3.662 led the way over Randy Weatherford, but only because he recorded the higher speed. Drivers 3 through 13 were within a tenth of a second of "King Tutt."

And while Xtreme Pro Stock attracted only eight entrants, they're bunched between 4.048 and 4.126 seconds.