HALE – AND FAREWELL TO ANY FUNNY CAR DOUBTS 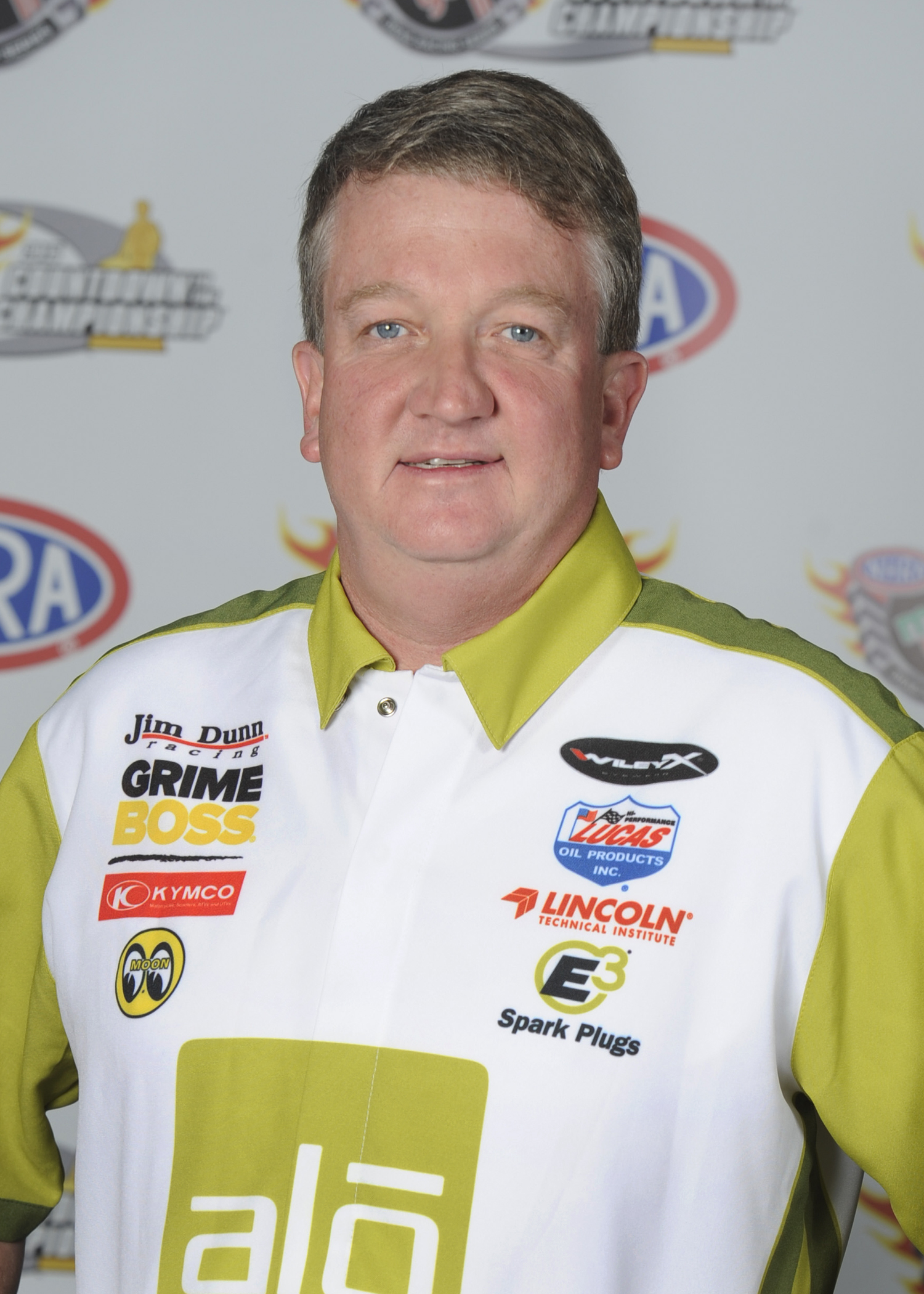 It was the second of four Funny Car qualifying sessions last Friday evening at the SummitRacing.com Nationals, and it was an elapsed time that left him no better than 11th place in the order. The speed was six or seven miles an hour off Matt Hagan's pace.

But for class rookie John Hale, it was an epiphany.

A lot of people have had eye-opening experiences on The Strip at Las Vegas for a variety of reasons. But this 4.091-second, 311.92-mph zip down the 1,000-foot course at The Strip at Las Vegas Motor Speedway was Hale's quickest and fastest – and a confirmation that he could drive an NHRA Funny Car, like he daydreamed about when he was a youngster in Dallas (and "as an adult many times even," he said).

That might seem like a delayed reaction, for he drove "Big Jim" Dunn's alō Drink Dodge Charger to a runner-up finish in March at the Gatornationals at Gainesville, Fla. Ron Capps won that event, but Hale said he was stunned to perform so well in just his third race since sliding over from his successful Nostalgia Funny Car program.

"It's going beyond my expectations. To already be in a final in my third race against Ron [Capps] at the Florida Gatornationals is a surprise to me and, I think, everyone else," Hale said. "It was OK that we didn't win that, but I'm hungry to get back there."

He drove the car – branded last weekend as the Bordertown Casino and Arena Dodge – like he meant that with all of his heart.

"I ran my first 4.0 yesterday, my career-best E.T. and speed," he said Saturday. "On that run, I really gained a lot of confidence that I can drive one of these cars and keep it in the groove.

"It takes a lot from the driver to get a 4.0 out of one of these cars. You have to be ahead of the cars, and you have to keep it in the groove the whole way or the car's not going to run a 4.0. When these cars do run 300, 300-plus, they're easier to drive because that's what they're set up to do," Hale said.

"So by keeping that thing in the groove and running that kind of E.T. and speed, I really figured out what it takes to drive the car," he said. "As soon as you do that, you go, 'OK, I get it.' So now I know what to do to get this car to run an '0,' driver-wise." 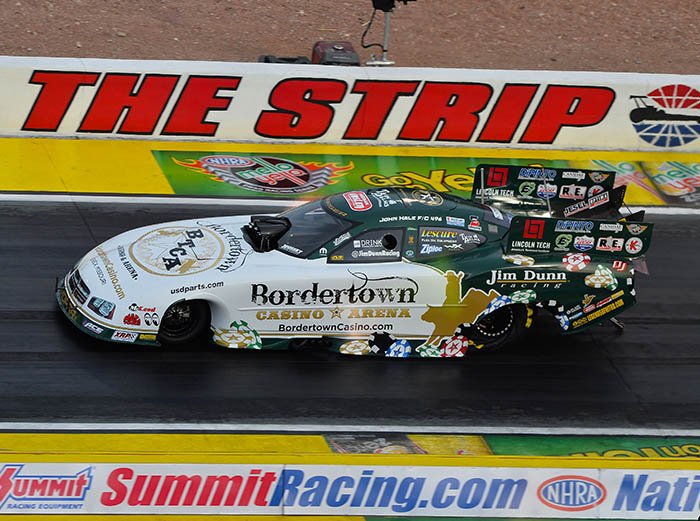 He shared that with Dunn and said, "Big Jim told me all along it was going to take three to five races for me to get up to speed with the car. This is our fifth race. Everything he's told me has been right. If he tells me something, I'm going to believe it for here on out. He's proven himself. He knows what he's doing."

Some might say Hale and Dunn are cut from the same cloth when it comes to the attitude of "Let's don't hurt parts. Let's find that right edge between aggressiveness and indulgence."

Hale explains their relationship like this: "What he has been is patient with his tune-up and with my driving. He approached this early on that I wasn't going to learn anything if he gave me a 4.0 tune-up and I wasn't ready for it as a driver. I wouldn’t learn anything, and we might hurt some engine parts by getting out of the groove and dropping cylinders. He's given me a little bit better car all along, and now we're at the '[4.]0' stage. And he knew I was ready for it. We had a talk [Saturday] morning, and he said, 'I'm going to give him the bucking bronco, and he's going to have to ride it this weekend. It's time.' We weren't going to qualify with a [4].19 here. It was going to take a .11 or an 0 to qualify here.

"When we were in the staging lanes, he said, 'If this thing sticks, it's going to be a good one.' And Jon [Dunn] had already told me, 'This may be your best run ever.' So I was determined when I got in the car to get this down through there, in the groove, under power," Hale said. "After it was over with, I said, 'I've figured it out now. I know I can drive one of these cars and keep it in the groove.' "

Still, maybe Dunn, a drag-racing pioneer since the 1950s who celebrated his 80th birthday at last year's spring Las Vegas race, has found the right driver who will give him the consistent performance he always has wanted to see. Hale said he believes he's the driver who can bring that to this team.

"I think so. I think so. I'm hungry for it. I really am," the Addison, Texas, businessman said. "I've had a lot of success in my nostalgia car. I know what it takes to win, and I'm going to apply that here. I want to win. I want to beat these guys."

That last sentence came out with a hint of glee at the thought. And as subtle as it sounded, it also sounded bold for Hale, who's an extremely low-key individual. He doesn't jump up on a stack of Goodyear slicks and bellow, "Look at me!" But he has a deep passion for driving this Funny Car.

"I do," Hale said, eyes twinkling. "I save my energy for when it's time to get the job done. I've approached this in a lot of different ways over the years, and getting all fired up at the beginning of the day and getting wound up just depletes my energy bank. So I just set a tone for myself throughout the day, and when it’s time to drive the race car, it's time to get up."

For him, what does that mean?

"I don’t bang my head. I just stay focused. I try to stay focused. I try to think of all the things I'm supposed to do," Hale said. "You’re telling yourself, 'Hey, let’s keep this car in the groove and do a good job and be ready for something. You never know what these cars are going to throw at you. 'What am I going to do if the thing goes over to the wall hard? What am I going to do if [I have] a fire or something?' Being ready is part of the deal. You need a plan."

His plan has kept him in the top 10 in the standings all season, as high as fifth place after the Gainesville race. That's more than champions John Force, Jack Beckman, and Cruz Pedregon can say. Same for usually strong-running Alexis DeJoria and Tim Wilkerson.

"Being a rookie, there are a lot of racetracks on the Mello Yello circuit that I haven't been to yet, so I do [scout the surfaces]. I try to get on the scooter and familiarize myself with them. But if it’s a track I've already been to, I pretty much know," he said. "If you oil the track down, you want to get over against the wall and not drag oil down the racetrack. If you have a fire, maybe you want to stop where there's the Safety Safari. Stuff like goes through your mind."

As for the power of mental-prep techniques, he said, "I haven't studied that, but maybe I will. I do think positive, and I do try to envision myself in the winners circle. I picture myself winning."

Maybe he doesn’t need to bother himself with that.