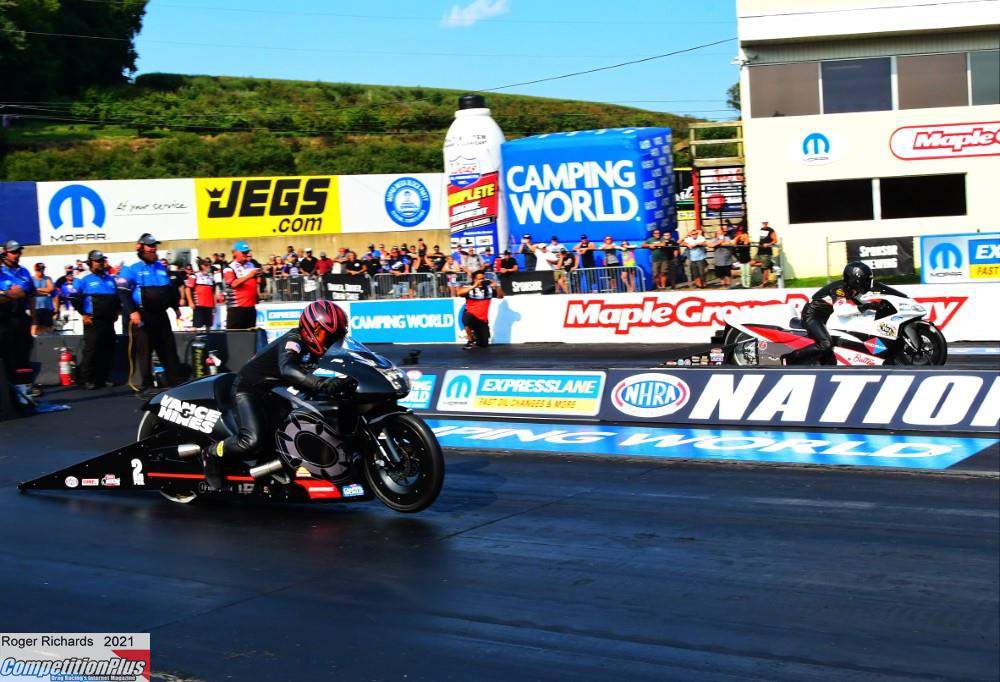 Torrence, Tommy Johnson, and Anderson sprayed it from the podium in jubilation. 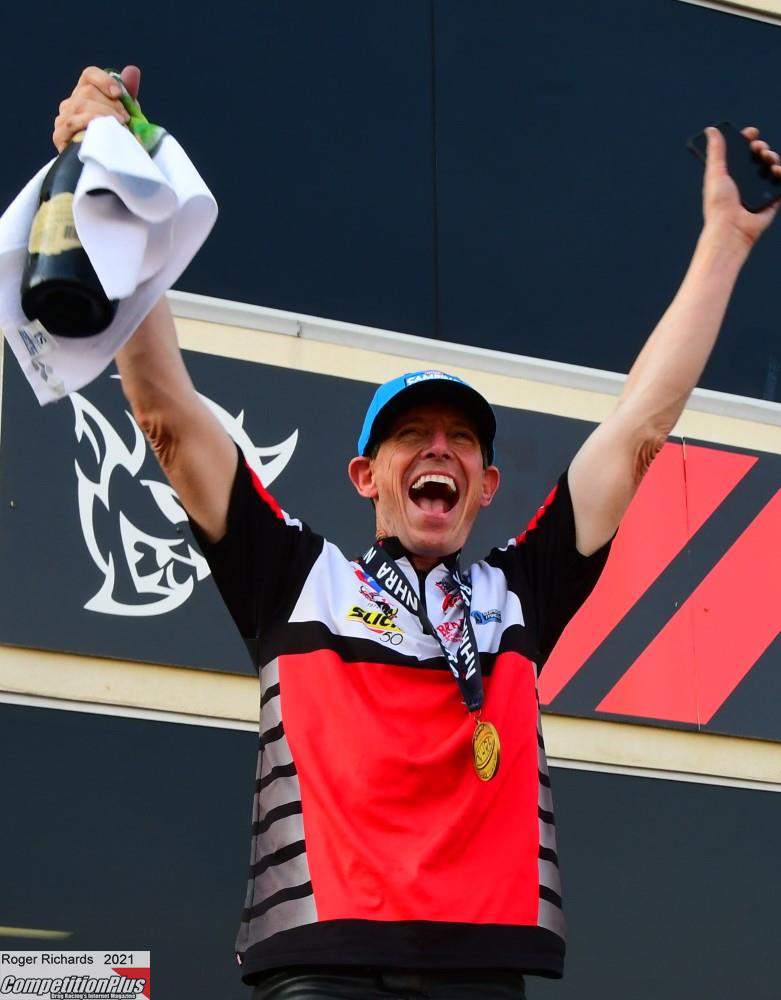 He had just won the opener to the seven-race Countdown to the Championship. Just earning the No. 2 seeding among the title-eligible racers was cause to celebrate. But for the first time in his 34-year drag-racing career, Johnson leads the Pro Stock Motorcycle points.

And when he found out, after defeating four-time class champion Eddie Krawiec with a 6.775-second, 196.87-mph quarter-mile blast down Maple Grove Raceway’s left lane, Johnson giggled like a kid much too young for champagne.

Moreover, this marks only the third time in the 60-year-old’s career that he has won two races in a season – and the first time since 2008 he has done that. He also earned a pair of Wally trophies in 2005.

Johnson won the spring four-wide race at Concord, N.C. Now he’ll return triumphant for this coming weekend’s DeWalt Carolina Nationals at zMAX Dragway, when the Camping World Drag Racing Series completes a string of three races in as many weeks.

When Johnson received the statue Sunday afternoon immediately after stepping from his Suzuki, Johnson said, “I’m so proud of this, because I sucked so bad in qualifying.”

He said he did, but he was exaggerating – he was the No. 5 starter at this first race in Eastern Pennsylvania since 2019.

Like Ebenezer Scrooge in “A Christmas Carol,” Johnson indicated that the spirits had done it all in one night, changing his fate. He said his crew told him as much.

Johnson said the key to his victory was that “well, really, the driver that was here on Saturday and Friday had to leave because he was atrocious. The weather was so fantastic and I think everybody was counting on fast, record-setting times and things like that. The media might not know it and the fans might not know it, but as a competitor, we all know because we see the atmospheric conditions. So I just got sideways. I was really, really bad on Friday and Saturday. Oh my gosh, it was horrible and everybody's going fast. And I'm like, “gosh darn, we want to go fast.” The weather was killer on Friday and Saturday. We had the same crew guys, we had the same people in the trailer, but that's the difference. That's a classic example of riding a ProStock bike or driving a ProStock bike. The driver was here on Sunday. The rider was here on Friday and Saturday.

“I have an awesome coach. I have a great advisory committee, and everybody said, go back to fundamentals. In Indy, I was out on the starting line. It was raining for half-hour, and it helped. Then today I was out here for a long time before racing started and just went through the fundamentals. So my takeaway from this is you can always learn even when you've been racing for more than five years,” Johnson said.

But his explanation took him through a rodeo reference.

“You ride a bull, right? The bull comes out, they pull the gate, and the guy’s hanging on. He's riding a bull. You do not ride a Pro Stock Motorcycle – you drive one. So it's controversial,” Johnson said. “You drive it, you let go of the clutch at 10,000 RPM, the front wheel’s in the air, we start to go crooked. The only way you’re steering is with your feet. You can’t turn the handlebars, because the front wheel’s not on the ground. So you drive a Pro Stock Motorcycle, and I did a pretty good job today.”

He said, “I was proud of my lights. My lights have been really rough.”

Then, as if he suddenly noticed the crowds that had packed storied Maple Grove Raceway all weekend, Johnson said, “It's like none of this would be cool without y'all. You guys are so awesome to be here. Thank you so much.”

Back to business, he said, “I’ve been racing a long time, and I've never led. That's awesome. I don’t even have the trophy. My guys got the trophy.”

Johnson said he’s “not much of a strategist. It's funny when y'all know me and I can lay out all this intelligent stuff.

“Man, I talked to Slugger Labbe today. There's so much wealth of knowledge in all the pits here and usually the smartest guys are at home. I think clearly you want to be leading the points and it gives you an advantage and stuff. But it really just boils down to the process,” he said. “We have a lot of people, my buddy, James and Candace were here. They’re sponsors of ours, and they've only been to two races and we've won both of the two that they've been here. So I can't tell you where they're going to be for Charlotte, right?

“But I think there's an opportunity to learn and drag racing, as corny as it may sound, we as a sport, we as a sanctioning body, offer something fantastic to young people. It's a career opportunity. It's not just in drag racing, it's about skilled trades. That's my life mission, to educate young people on skilled trades,” Johnson said. “So as you learn about skilled trades from all these intelligent people, you learn from the STEM that the whole process of math and how it helps things. My bank account is not doing good with math. But it's an opportunity to learn.

You really have to be dedicated, and you have to be open to learning,” he said. “And that's what we did today. We learned.”

And he was in teaching mode Sunday, as well.

“But go get a motorcycle. Go to a Suzuki dealership and try a motorcycle. Get a dirt bike. Whatever it is, I don't get no love from Suzuki or any love from that. But I'm just telling you, enjoy things.

“And look – one more thing . . .,” Johnson said. “Just think of one thing this next week that you can learn, because we learn so much and they teach me so much – all the competitors do. So learn something and chalk it up to experience, because it'll make you better.”

So everybody has been to school – and Steve Johnson has been both teacher and student. More importantly, he is a threat to win the Pro Stock Motorcycle championship.