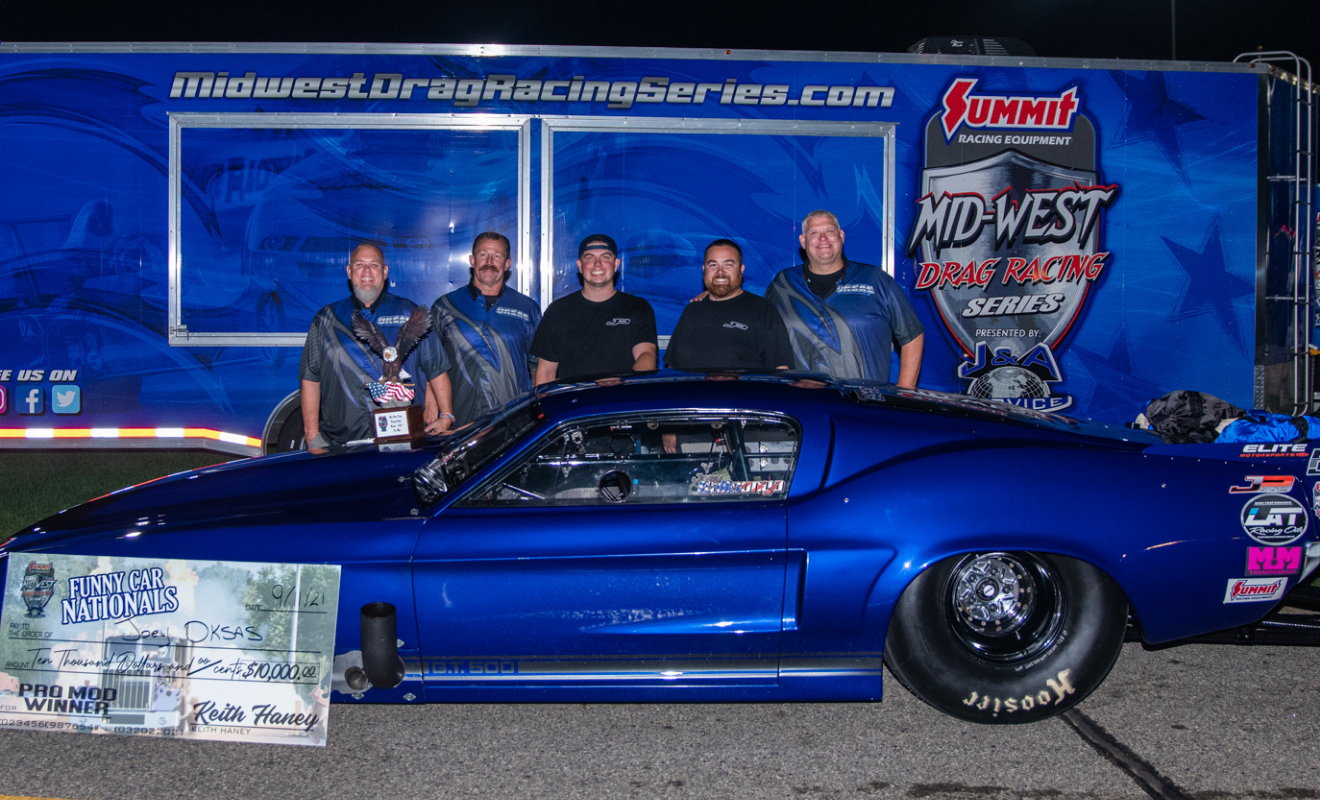 For the second race, Oksas also met Keith Haney in the Pro Mod final round, with Oksas securing the victory and taking over the points lead in the process. Oksas had a reaction time of .021 in the final round, as his run of 3.713-seconds at 214.69 mph in his turbocharged ’67 Mustang held up against Haney’s quicker 3.68 at 206.23. 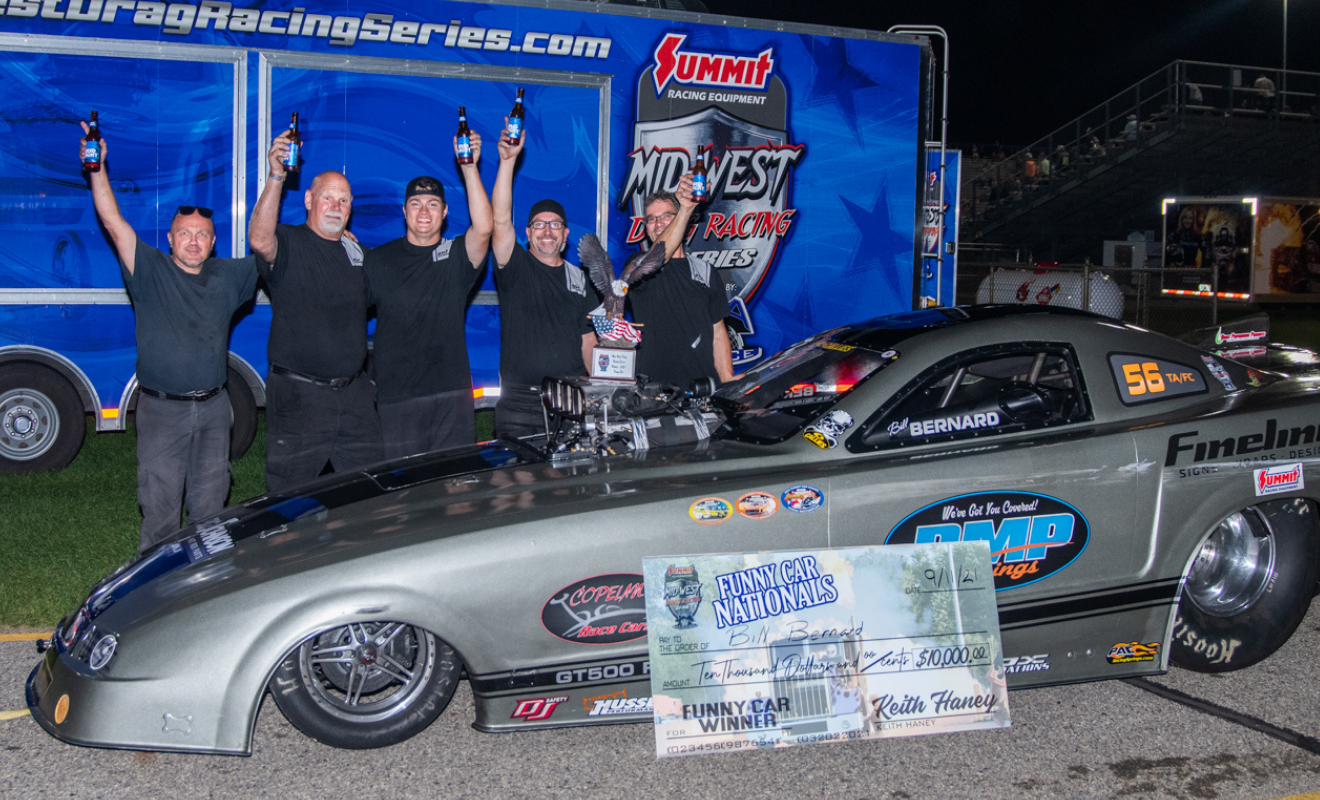 “The place was packed and it was awesome, and this win was almost as sweet as the first one,” said Oksas, who picked up his first career Pro Mod last month at the Mid-West Drag Racing Series’ Great Bend Nationals. “The field was so tight and there were so many incredible cars, it almost felt like a Pro Stock race. Anyone in the field could have made it happen.

“We just tried to look at it one round at a time. (Tuner) Jeff Pierce knows what he needs to do against our competition and I just had to do my job. When we both do our job, we’ve had a pretty good outcome so far.”

Oksas wasn’t at the top of qualifying, but he made two solid runs, including a 3.705 before going 3.698 at 214.90 in the opening round of eliminations. He followed with a 3.719 to advance to the semifinals, earning the victory there to set up another marquee matchup with Haney.

Oksas was stellar on the starting line all weekend and delivered when it counted, putting him in a great position heading into the final stretch of the MWDRS Pro Mod season. 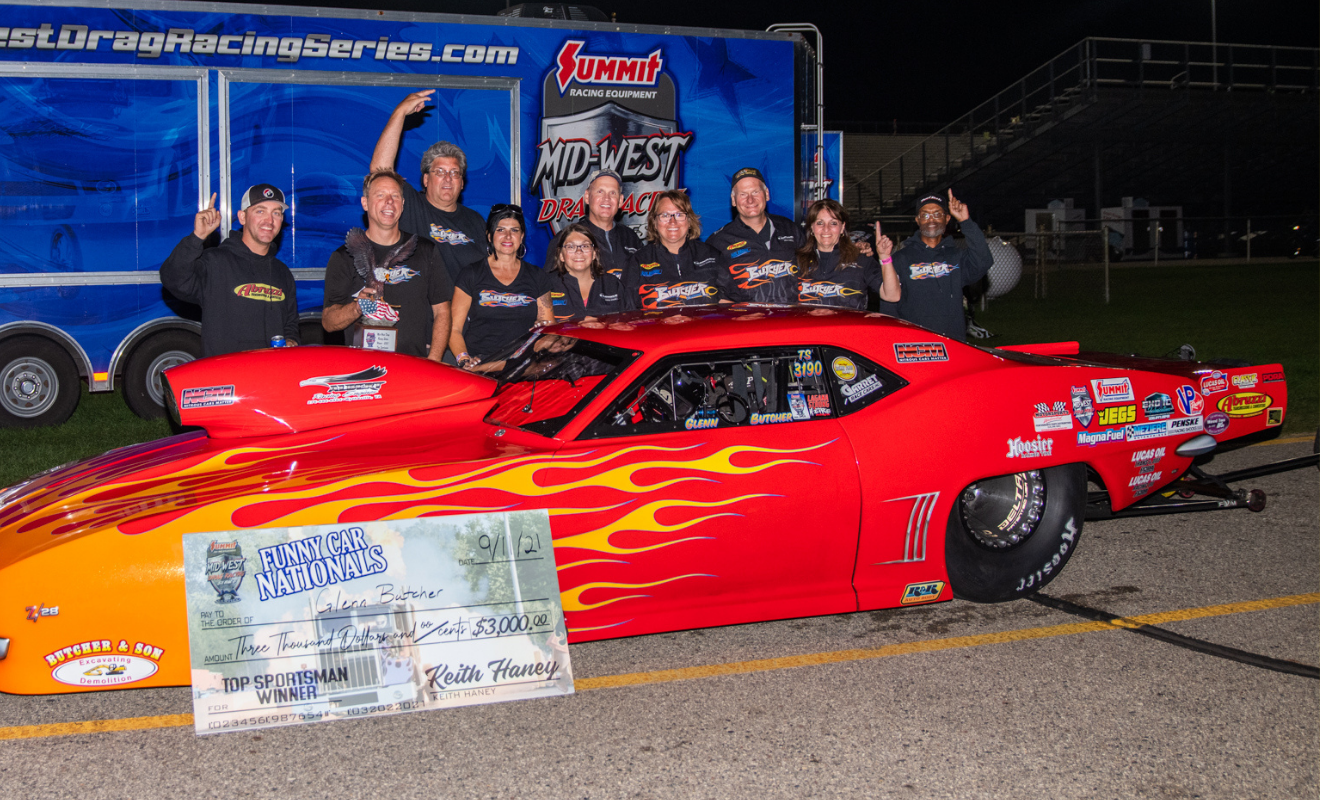 “We knew Keith had a good hot rod and we knew it was going to be a damn good race,” Oksas said. “That’s how it is in this class. It really makes it so drivers have to keep up on the wheel. There’s so many good drivers and you have to be on as a driver and you’ve got to have a good hot rod to win.”

In Top Alcohol Funny Car, Bernard continues to enjoy a terrific 2021 campaign, picking up his second victory this season. In Martin, Bernard and Annie Whiteley had a thrilling side-by-side run in the final round, with Bernard’s 3.670 at 204.17 holding off Whiteley’s 3.679 at 211.47.

“The team really persevered this weekend,” Bernard said. “After Q2, we were up until 3 a.m. We were down on boost and we had to figure out what was going on. We got that fixed and other than that, we had a consistent car all weekend.

“It’s really exciting for us. It’s going to come down to the last race with the top four in this class. We’re all right there and it’s really anybody’s championship.” 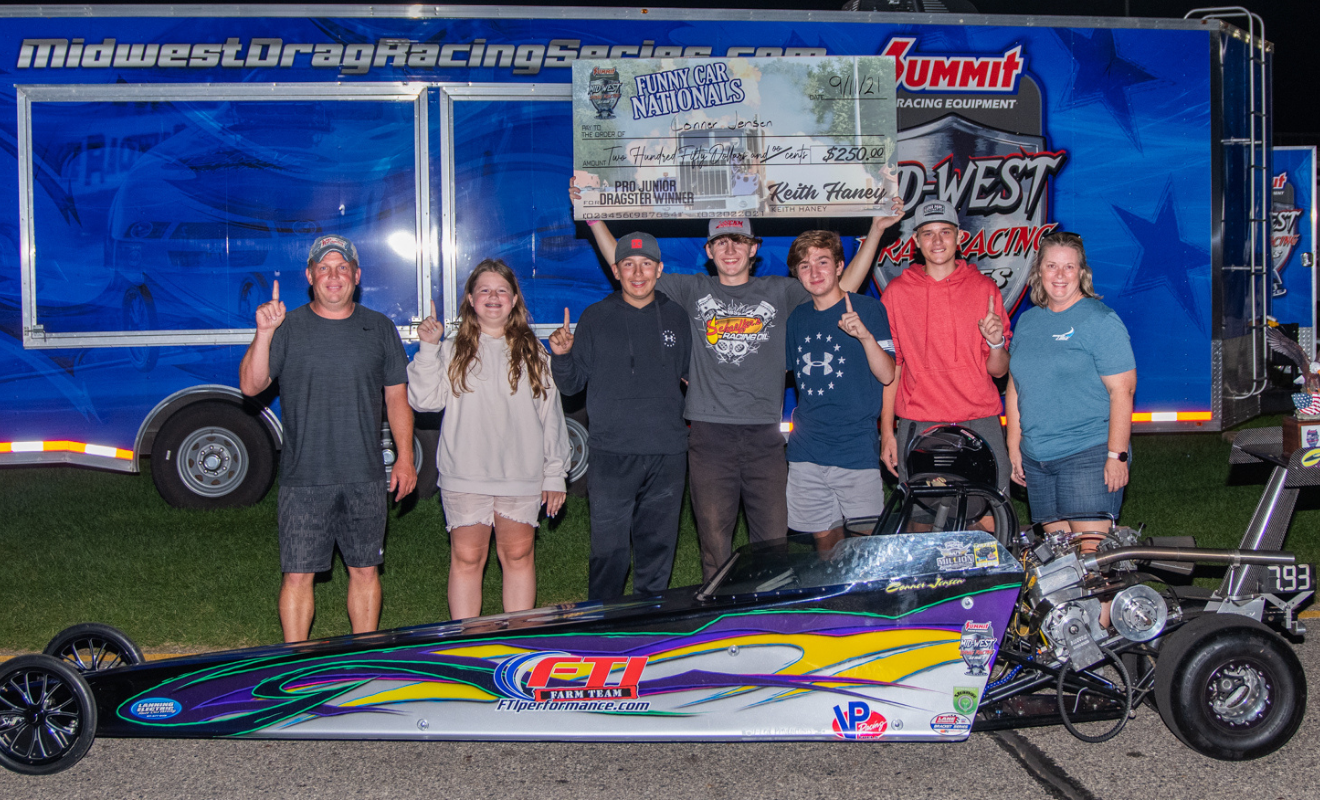 Bernard and defending world champ Sean Bellemeur are neck-and-neck at the top in the class at the moment, but it was Bernard who shined last weekend.

He went as quick as 3.666 at 213.27 in qualifying, going 3.671 at 206.71 to slip past Chris Marshall on a holeshot. Bernard was the better .032 on the starting line there and then added an impressive .017 reaction time in the final round, enjoying every bit of performing in front of a huge crowd in Martin.

“For me, that was the greatest thing seeing all the packed stands. As you start going rounds and that crowd starts congregating behind your trailer, I just feed off that. It seems like the bigger the crowd, the bigger burnout I have, too.”

In Top Dragster, Schneider provided the most inspiring moment of the weekend. Battling breast cancer, Schneider went through chemo and radiation treatments earlier in the week before picking up the victory at the U.S. Nationals, beating Bill Swain in the final round. 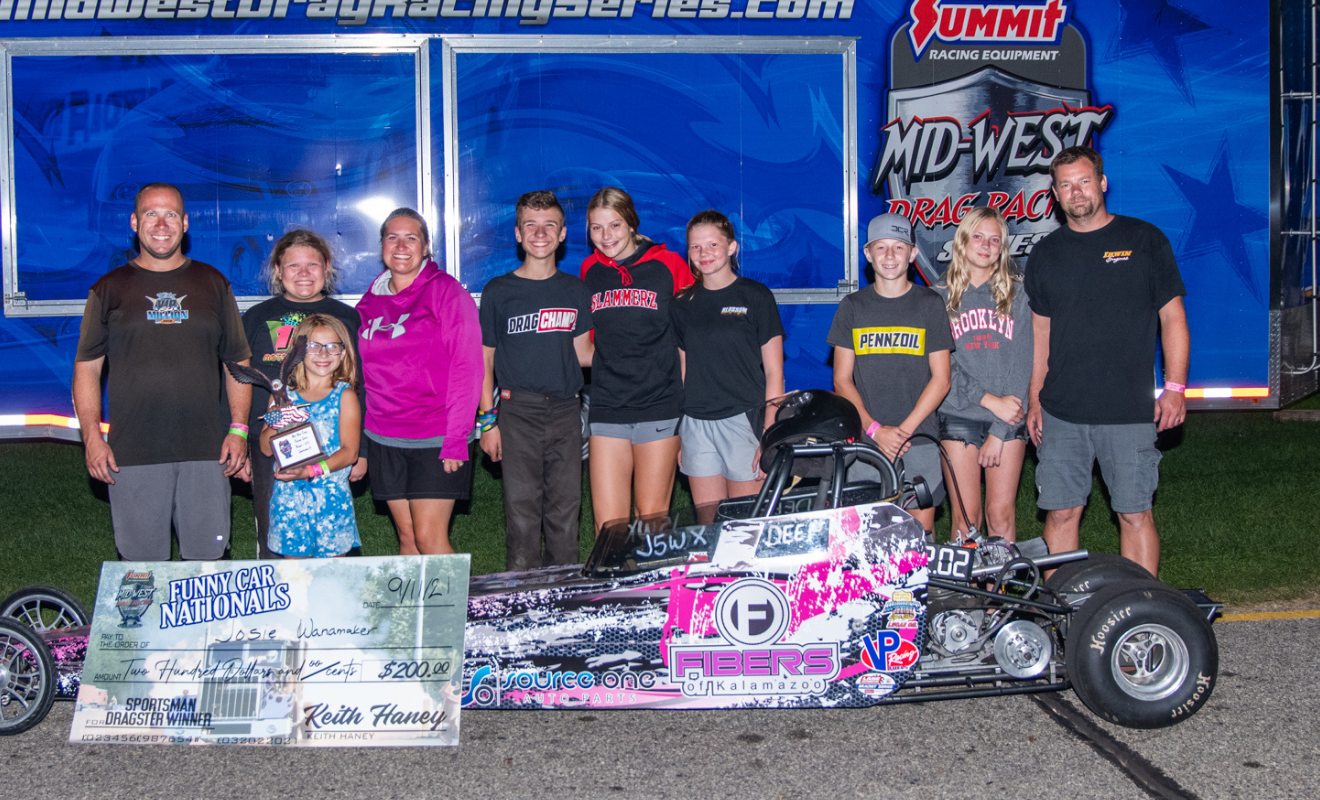 In all, the MWDRS drew rave reviews at U.S. 131 Motorsports Park and series owner Keith Haney praised everyone for delivering on a memorable weekend. In addition to huge crowd, the jet car team of Elaine Larsen set up a school for children at the track. They were bussed to the track to learn about the cars, with nearly 125 children enjoying the show.

“The staff at the Mid-West Drag Racing Series and the track both did a phenomenal job,” Haney said. “It was packed and just an unbelievable experience.”