LONG BEFORE THERE WAS FLINGING; LEEK BROUGHT BIG MONEY BRACKET RACES TO THE COMMUNITY 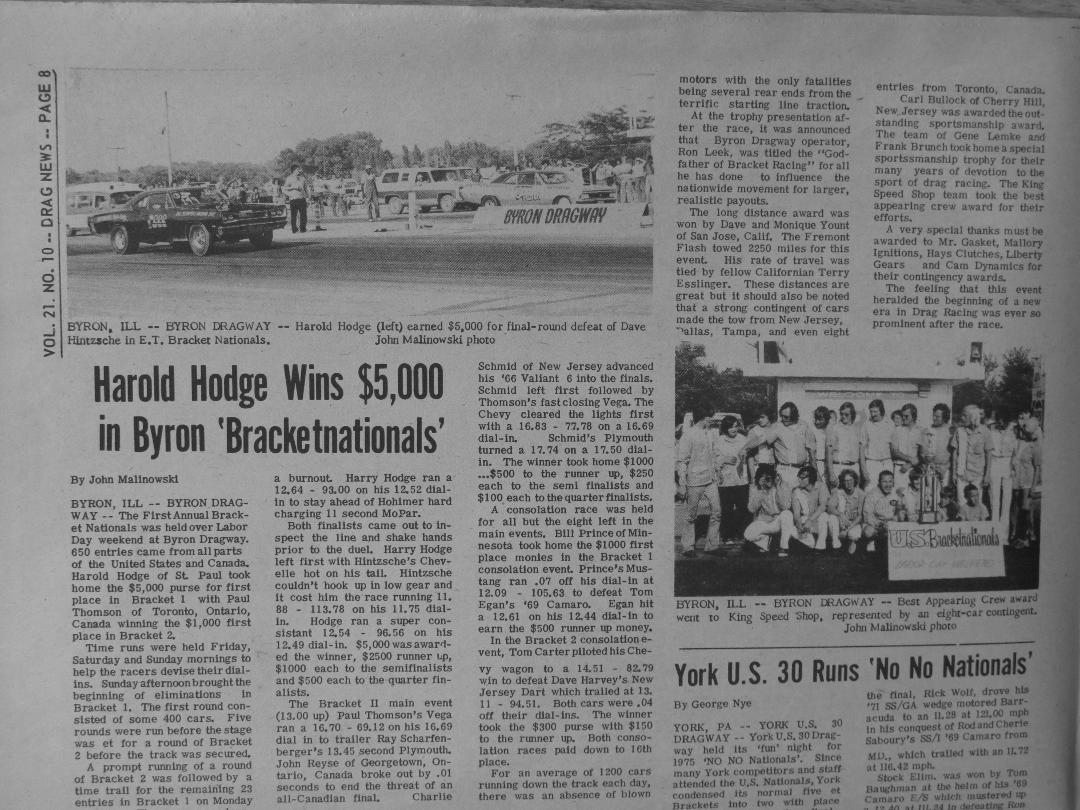 Veteran drag racer Bo Butner admittedly fulfilled a bucket list item in March 2021 when he drove his way to victory on Day Four of the Spring Fling Million in Las Vegas.

Butner, who had won on the highest levels of professional and sportsman drag racing, likely had no idea the foundation for the race he sought to win was poured when he was one year old. Additionally, two of his fellow winners weren't even born.

Long before there was the Spring and Fall Fling Million, SFG Million, or any of the several big-money bracket races, there was Ron Leek's Byron Bracket Nationals.

The event was the big coming out party for the transition from class racing to bracket racing.

For six seasons, Leek, one of the more forward-thinking sportsman promoters, had campaigned the Gas Coupe & Sedan Nationals at his track outside of Rockford, Ill., in the small town of Byron.

"It was a big money Modified Eliminator race," confirmed noted drag racing historian Bret Kepner. "It drew a lot of cars. But even then, Modified was dying. And that's why he switched to the Bracket Nationals because bracket racing was starting to take over the world at the time."

As Kepner recalled, it wasn't as much as Modified was dying as the number of uncompetitive cars grew.

"You have to remember that bracket racing started out not with street cars, not with cars that were built in somebody's backyard to go out and just have fun," Kepner explained. "Bracket racing was created as a pull place for uncompetitive class cars. Period. Dial your own. You don't have to run on the national record. You can dial your own handicap. That was the appeal."

"Virtually all of the records were blown out of the water,"  Kepner explained. "You couldn't find a soft class to even go race if you wanted to. They were all murdered. When Modified eliminator was created in 1970, at that time, you were handicapped off the national record, and you could not run quicker than the record until the final round when you were allowed to run a tenth under. No more."

For those who couldn't run the revered NHRA U.S. Nationals in Indianapolis, they could head to Byron Dragway and compete for almost five times what the Indy sportsman winner received in purse. Even the Bracket-2 winner made as much in one weekend as the Super Stock winner could bring in.

The inaugural event, described as "first annual" in the September 20, 1975 edition of Drag News, attracted nearly 650 entries from as far as Fremont, Ca. An average of 1200 race cars made passes in each of the first two days of time trials, and at the end of the event, Leek was credited for his promotion of bracket racing.

John Malinowski, who penned the article for Drag News, wrote, "At the trophy presentation after the race, it was announced that Byron Dragway operator Ron Leek was titled the "Godfather of Bracket Racing" for all he has done to influence the nationwide movement for larger, realistic payouts."

By 1977, Leek's efforts were chronicled in Hot Rod magazine for gaining the lion's share of media attention, mainly in part for his Byron Bracket Nationals, officially known as the U.S. Bracket Nationals, a sportsman alternative to the NHRA's U.S. Nationals.

The combined purse at Leek's event had grown to $45,000 by then, and at the time, some of the more proficient bracket racers were earning upwards of $20,000 per season in winnings.

The event helped to make stars of many of today's bracket legends such as Randy Folk, Johnny Labbous, and Ed Richardson, to name a few. Carl Bullock, one of the sport's foremost organizers of bracket racing on a national level through his United Bracket Racers Association, was a staunch supporter of the event from the start.

The Byron Bracket Nationals ran for 27 years until 2002 when other commercial big dollar bracket races began to surface. Byron paid $10,000, which was still considerably more than many others paid at the time. 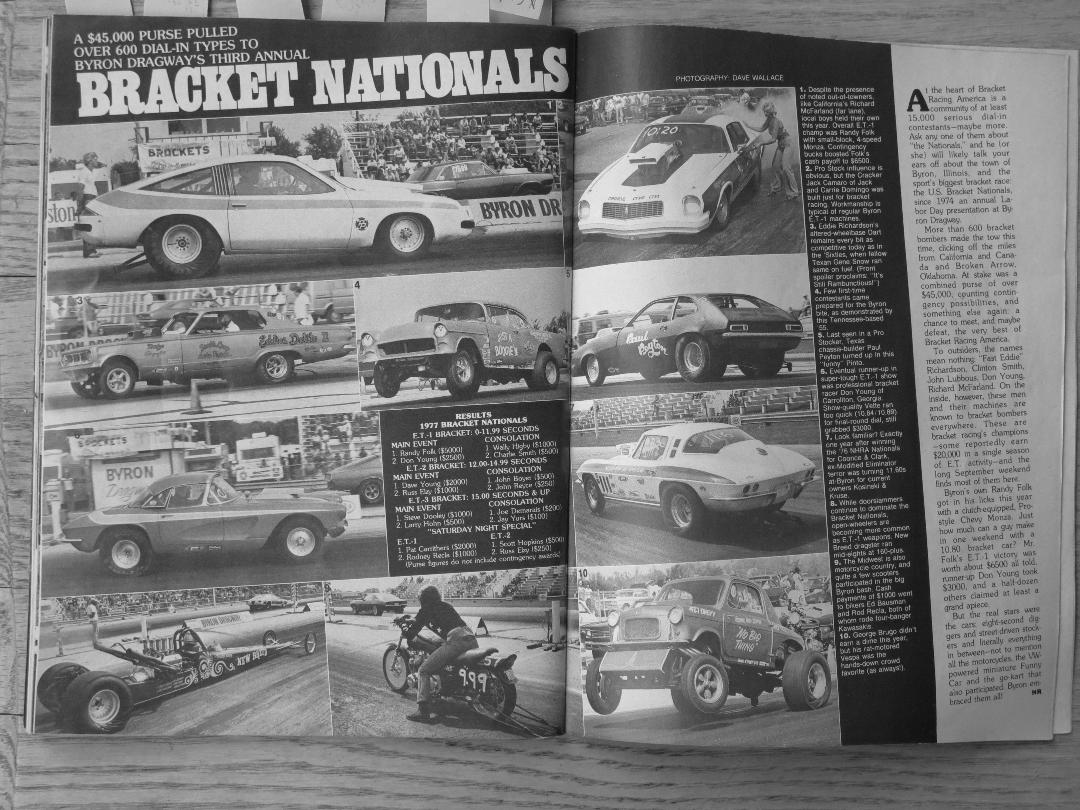 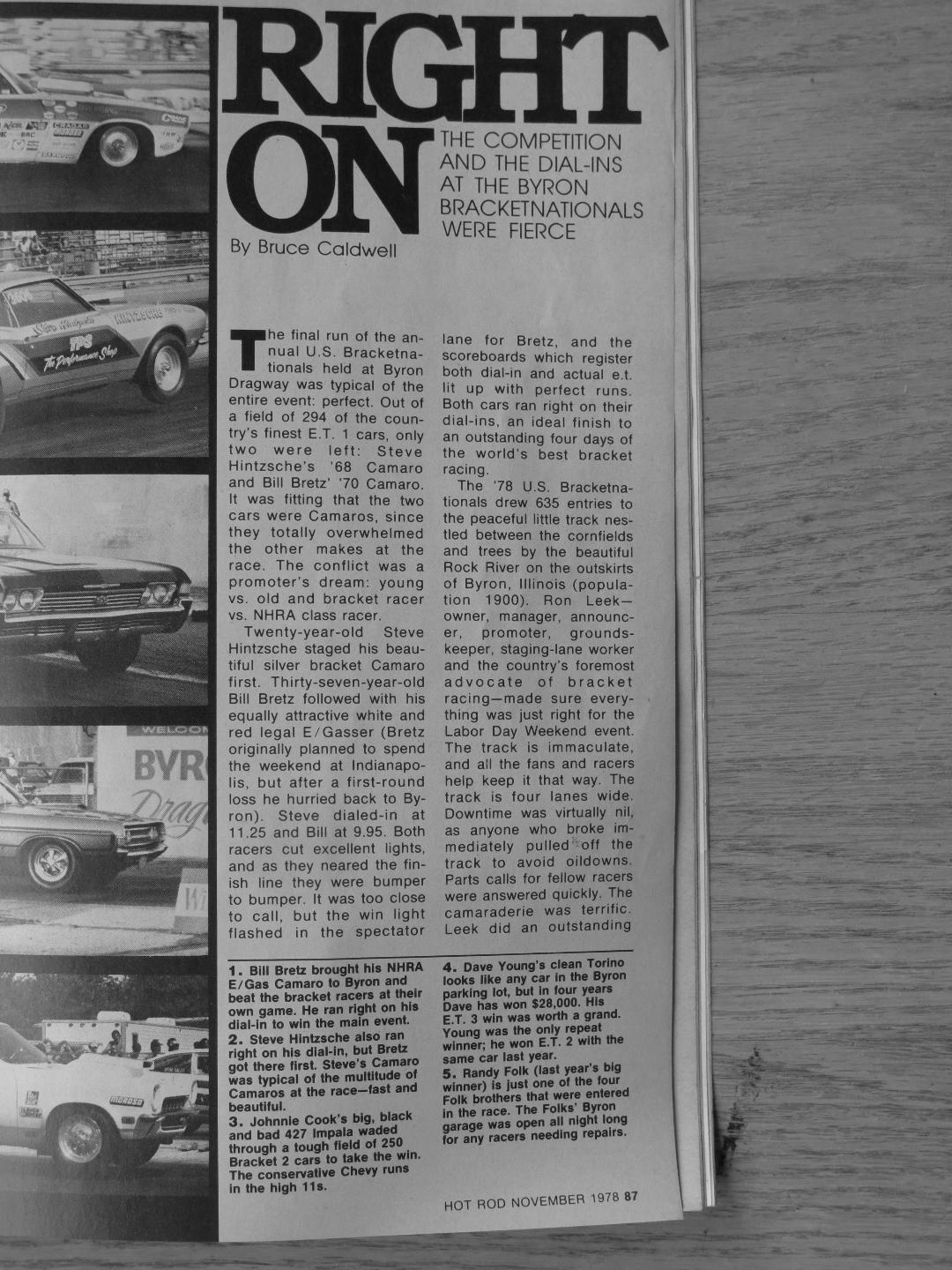 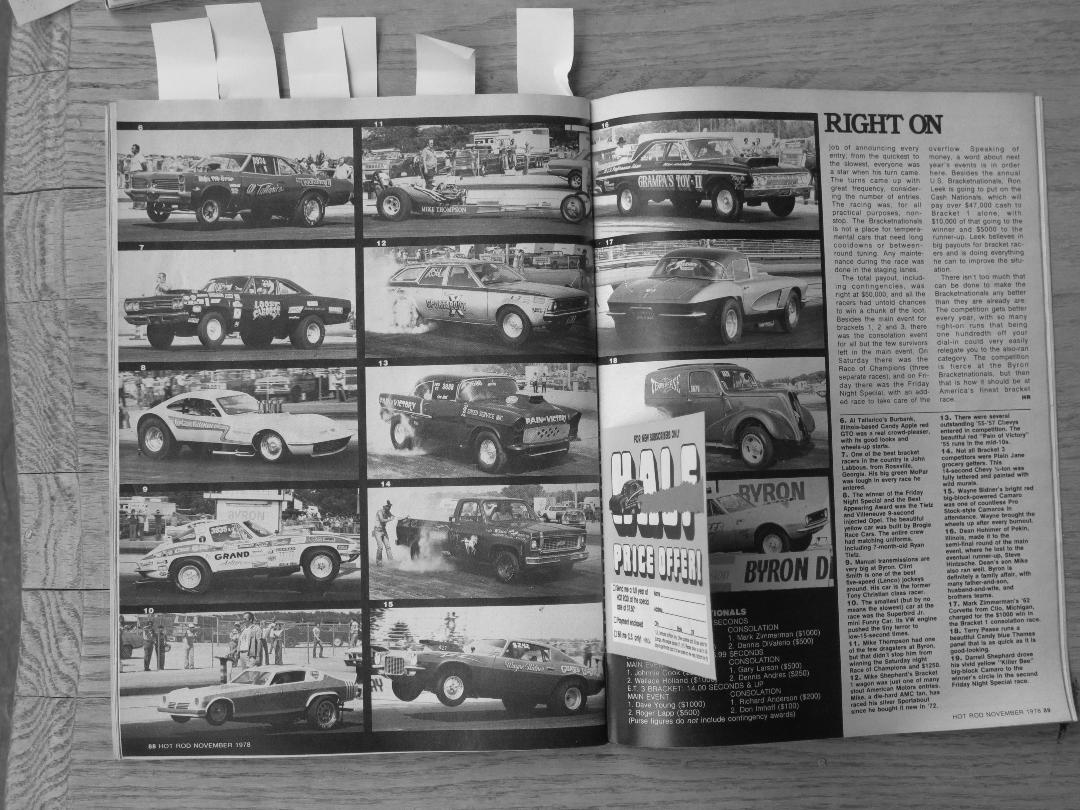