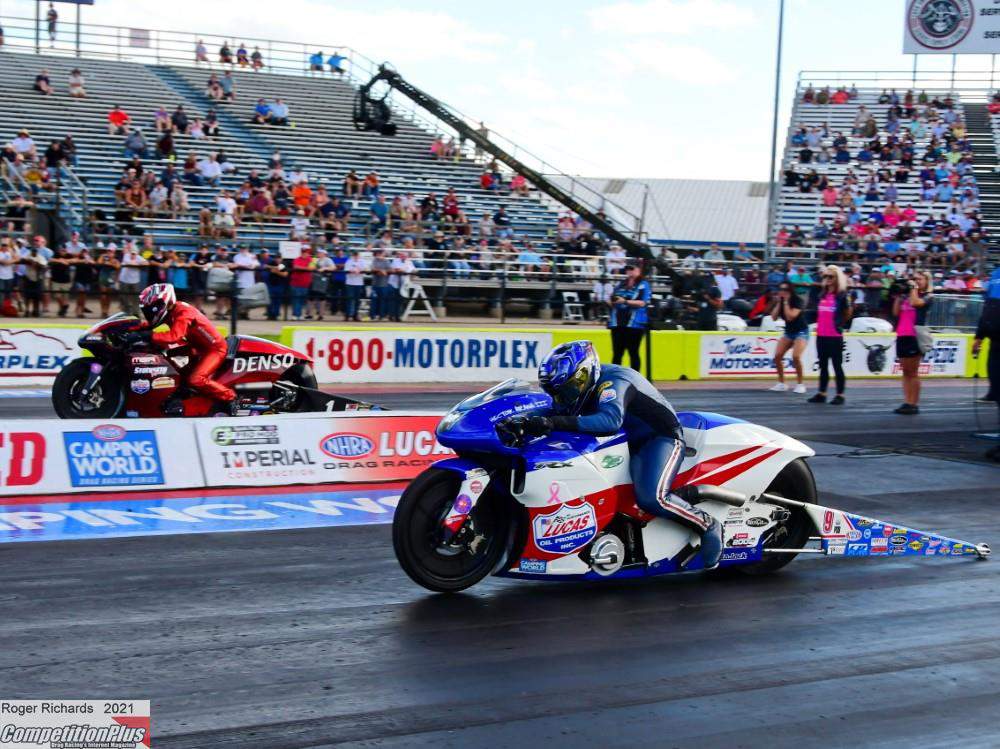 One would be wise to never count Rickie Smith’s boy out of anything.

Matt Smith, the son of one of drag racing’s most prolific doorslammer racers - Rickie Smith, hasn’t ridden his father’s coattails to prominence, but this doesn’t mean he hasn’t learned a thing or two from the crafty veteran along the way. 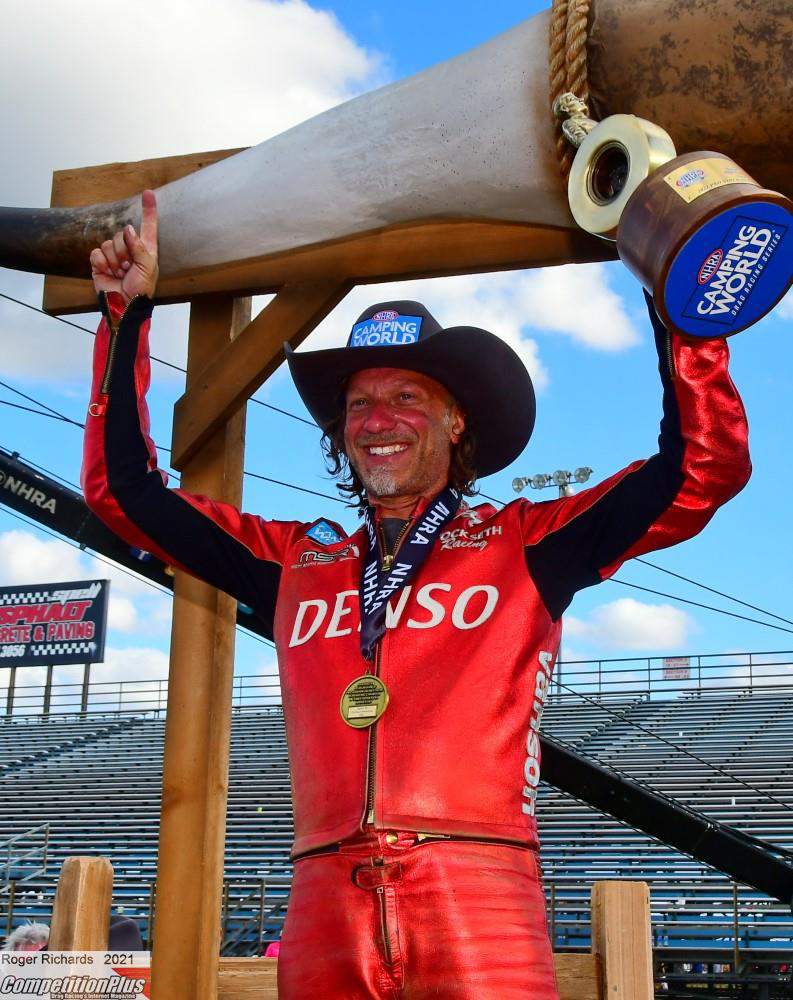 Smith stopped surprise finalist Hector Arana Jr. in the finals, and in doing so, took the points lead.

“We were pretty flawless all weekend,” said Smith. “We qualified number two, just a tick behind Steve Johnson and we were low every round today I think. Hats off to my guys, Nate Kendrick, and Angie, my wife and Cookieman, and Michael Ray. We got an awesome team to run the table here and collect the money from Billy Meyer for the quickest pass Friday night and get that cowboy hat and a brick. Since 2005, since I started my career, I’ve always wanted to win this race and never have, and just glad to get it done.”

The biggest obstacle Smith faced en route to the finals was in shaking off the dumb luck which has plagued him since the playoffs began.

“We’ve had the best bike all year,” Smith said. “Steve’s definitely stepped his program up and it’s just one of the things. We’re going to go head to head with him the rest of year, and hopefully we can pull this thing out and get a five-time and stop him from being a one-time. That’s the goal. We’re going to do everything we can for Denso, Lucas Oil, Mark Stockseth and Greg Butcher Trucking and everybody who helps us. That’s what we get paid to do and what we’re going to do.”

Given his druthers, he’d like to have beaten Johnson in a heads-up competition. Instead, Johnson’s bike lost fire in the semi-finals and also lost its advantage on the field.

“You don’t ever want to see your competitor lose like that, but when it’s the grand scheme of things, it happened to me here last year,” Smith said. “First round, I was number one qualifier and I couldn’t make first round because the bike wouldn’t even crank up. So it’s just one of them deals. Parts failure that got us at Reading. We had semi-finals won to race Steve in the finals and a parts failure. Obviously, he had a parts failure happen.

“You just gotta go over these bikes every second we can and try to save these things so we can have the best stuff come these last two races. You’ve got to capitalize on everything you do. We come in this race, we were 30 points down. We knew we needed to get bonus points. We didn’t get as many bonus points as he did, but we were close to him and we were number two qualifier right behind him, so we didn’t lose that many in qualifying points. When it all comes down, if I can win three more races, it doesn’t matter what anybody else does.”

Next weekend, the NHRA tour rolls into Bristol Dragway. Smith went to the historic facility many times as a kid with his father, who drag raced there, but never as a racer.

“I think it’s gonna be tricky. It’s kind of a rough track,” Smith said. “I’ve never raced there, but I’ve heard it’s really rough, and these motorcycles, we don’t have shocks, so that could be really iffy out there. We’ll see what happens. I’ll be interested first round to see how fast we can go spinning the tire because when you don’t have shocks on a bike, and you hit a bump, it just unloads the whole bike.

“We make a lot of power down track, so that’s kind of where it’s rough from the 330’ to the finish line, I’ve heard. We’ll see what happens, but hopefully we can run good there and do everything we can to get as many points as we can.”