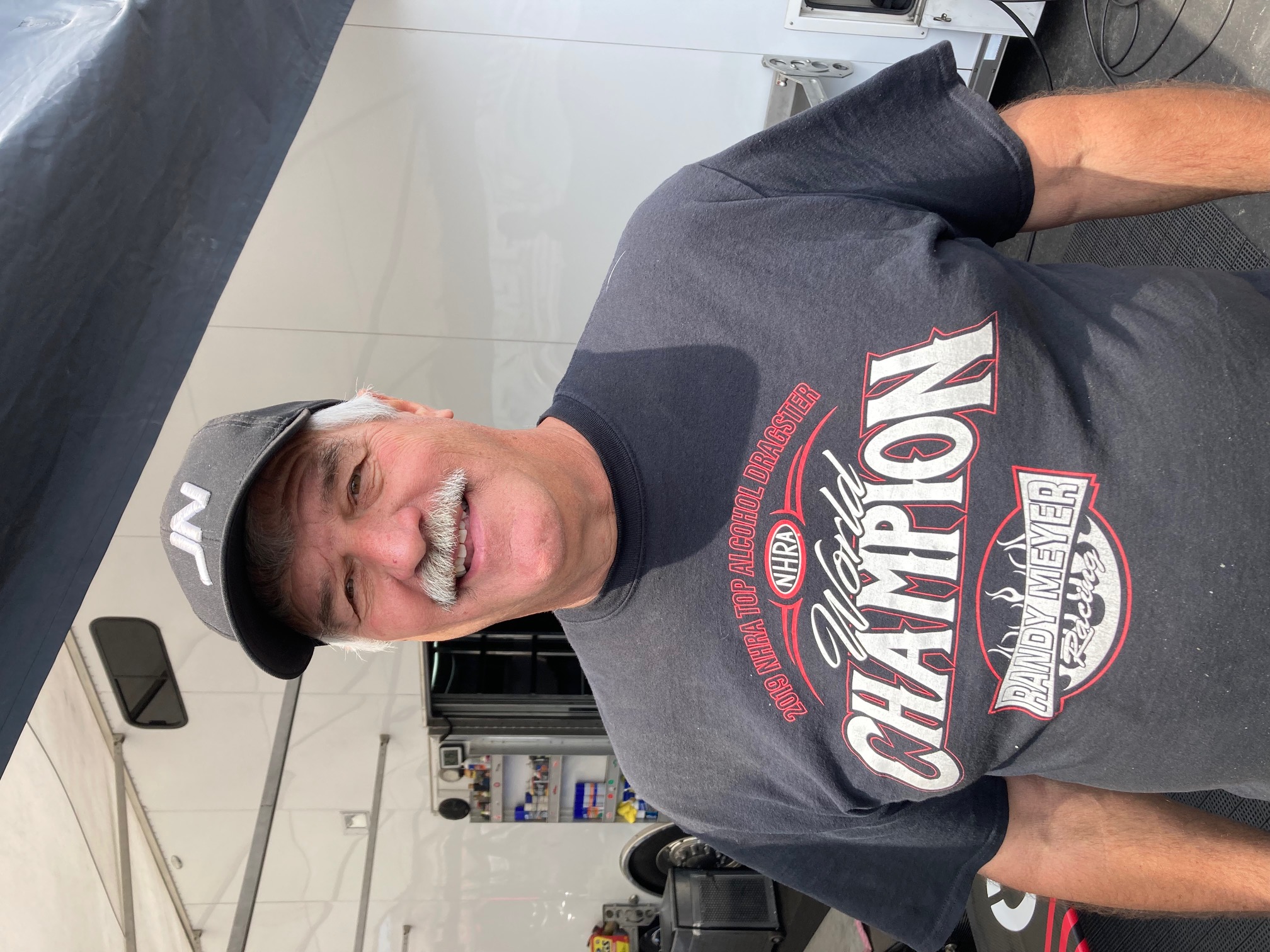 Randy Meyer knows his drag racing role, and he's perfectly fine with it. While he's not exactly the Don Schumacher of Top Alcohol Dragster team owners, he is instrumental in preparing several drivers for their ultimate ascension into the Top Fuel ranks.

"I'm not anywhere near the level of where he's at, but probably looking for a similar goal, and that's to take young people that are inspired to be racers and give them a chance," Meyer explained. "And we want to give them a chance at an easier, more entry-level, instead of just jumping into the Top Fuel Deal and getting in trouble and stuff. But this is a great opportunity.

"People ask all the time when I'm going to start driving. I said, 'I'm not going to drive again, because I get a lot more enjoyment out of seeing young people, or new people, come to the sport and put a smile on their face that they'll have the rest of their life."

Meyer has been there and done that and has the t-shirts to prove it. He was once a Top Fuel driver himself, so he understands all too well the complexity of the journey.

"I've pretty much done almost everything I've ever wanted to do," Meyer said. "So, I don't have anything else to do. It's easier for me to kick back and do that. I just get a lot more enjoyment from what I am doing now."

When Meyer says he's done it all, he means that he's raced a blown alcohol dragster, set a world record, and even won a championship. He even suffered a nasty crash while racing against Eddie Hill, one so bad he reevaluated racing at the top of the drag racing food chain.

"I did that for about six, seven years, and when Rachel was born, with a lot of things going on in my life, I just parked the cars for a little while, and I decided to take a break for a few years and let the girls get where they could walk and a little bit better shape," Meyer explained. "Then when I came back, I was kind of burned out on the Top Fuel deal. It was just too much work and too much money of what you get out of it."

Meyer became intrigued by the expanding A/Fuel Dragster movement and decided to jump on the bandwagon, eventually settling on a role behind the car. Now he's managed several Top Fuel drivers on their way to the big leagues.

"There's just pride in general that you helped someone make that happen," Meyer said. "Justin Ashley's a good example. He did really good in my car, and it was easy to make that transition over there. And that's, kind of, what this deal's about is that.

"Julie [Nataas] will probably drive a Top Fuel car someday. That's been her dream. And my girls really had no interest in doing Top Fuel. It makes you feel good when you see people, even in business or whatever, some of the guys that work for me, and they move up and start their own deal. It just makes you feel good. You were part of their upbringing."

Meyer said he could tell in the first ten minutes with a driver whether they would fulfill their dream.

"It doesn't take very long," Meyer admitted. "You have to have a certain mindset if you want to do this and a certain commitment. And I can tell really quick with a conversation, before they ever sat in a car, who's real and who's not, and who's going to be able to go forward from there."

Meyer's curriculum in the past has been limited to the long skinny cars. Still, recently he purchased a used Funny Car and installed an injected nitro combination in hopes of servicing aspiring flopper drivers.

"I think there's an opportunity there. I think there's a market there that needs to be looked in. I thought, 'I've got the time. I've got the pieces and stuff. We went out and bought an old used car and stuff and put it together and thought we'd test the waters with it.

Sources have indicated the NHRA has contemplated putting injected Nitro Funny Car combination in the Top Alcohol Funny Car class to create more entries. Whether Meyer's new car becomes a part of that movement remains to be seen.

"We built this car, but not for that," Meyer said. "We built this car for people to go out and make runs and see if they like it or not and to go out and help support the Funny Car Chaos series, which is in the Midwest. So, we'll see. It, kind of, is going to depend on how they approach it, if they do approach it and what the rules and stuff are going to be. And we'll just take it from there. But that was not our intent when we built this."

Right now, Meyer's intent, regardless of the combination he fields, is to have a good time and help grow the sport.