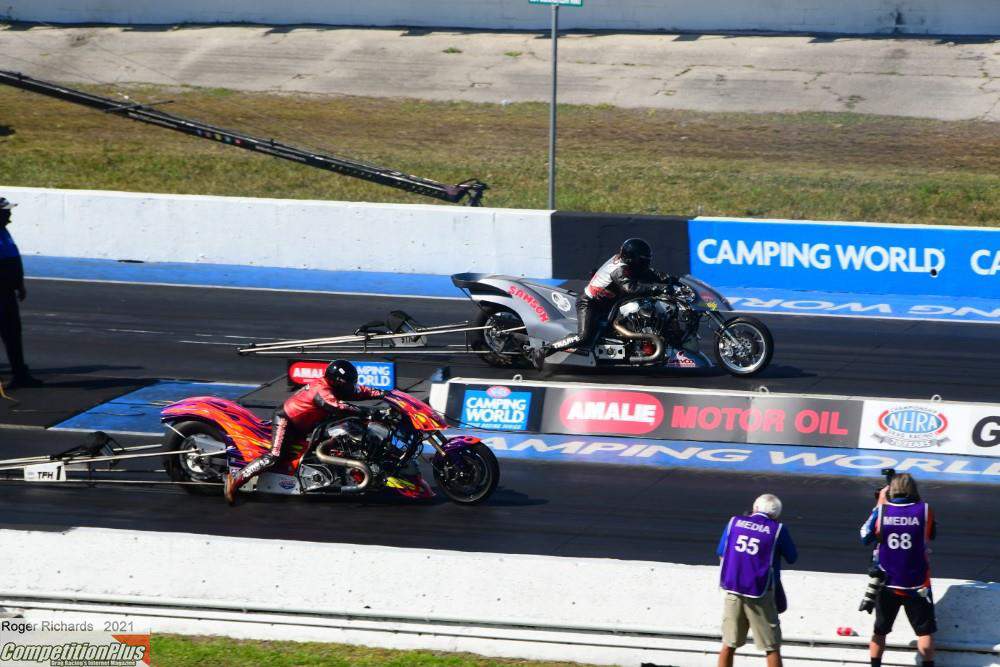 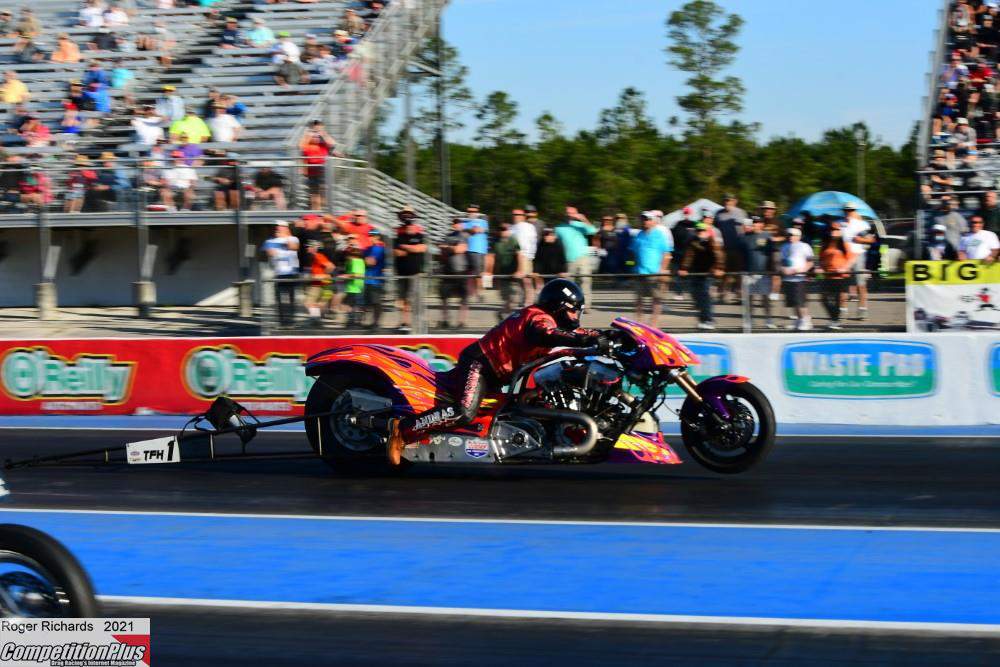 When the 2021 NHRA national-event season kicked off in March at Gainesville, Fla., there was a notable omission from the field.

Jay Turner, the champion in the inaugural season of NHRA Top Fuel Harley racing, wasn’t among the entrants. Other bikes that he fields were, though, and a pair of those riders duked it out in the final round. Randal Andras, the 2020 kingpin in the class, downed 2018-19 titleist Tii Tharpe for the Wally.

And that trophy was all there was in the way of post-race spoils. NHRA was unable to find a sponsor for the class during the offseason when Mickey Thompson Tires declined to return in that capacity.

The Top Fuel Harley riders were allowed to compete at Gainesville, but for zero purse. Turner opted out of racing, saying in a Facebook video that it didn’t make business sense to race for a trophy and nothing more.

That left the future of the class somewhat in the air as far as NHRA was concerned. As of Tuesday, races planned for Madison, Ill., and Topeka, Kan., are no longer on the schedule.

Those dates probably exist only because the racers have stepped up to provide the purses for at least four of those events. Tharpe’s sponsors, SPEVCO and Samson Exhaust, will cover the pot at Charlotte. One of Andras’ companies, AB Steel in Lake Charles, La., is funding the race at Houston Raceway Park; California rider Tim Kerrigan drummed up backing for the U.S. Nationals; and JT’s Auto & Cycle is putting up the money for the homestate Maple Grove finale.

“We really want to race bad,” Andras said from his Louisiana base Monday. “I just hate to see this thing die, you know? It has a reasonable amount of people that follow it … and you’d think you could find somebody in the freakin’ country that’d say, ‘Hey, man, for a hundred grand we can pick this up,’ you know?”

“The four races are signed, sealed, delivered,” Tharpe said, “and I’m a little puzzled why they (NHRA) haven’t put a schedule out there.”

Apparently, news that there wouldn’t be a purse for the season opener was a surprise to some of the competitors.

“If you’re in the clique, you knew there was no purse,” Tharpe said, “but if you hadn’t been on the calls and stuff, you wouldn’t have known there was no purse ‘til you got to Gainesville -- and had to pay an entry fee to race for not one red cent."

Since they weren’t going to be paid for the race, Tharpe said the competitors hoped to participate without having to ante up an entry fee. NHRA, he said, wouldn’t budge.

“They said, You’ve got to pay an entry fee because we’ve got to keep it even. Everyone pays an entry fee,’ “ he said. “Hell, it’s not like we don’t talk to everybody else and know the deal. I know that the top 10 in (the) alcohol (classes) pay no entry fee. What they do pay is $120 for the insurance, which we had no problem paying.” 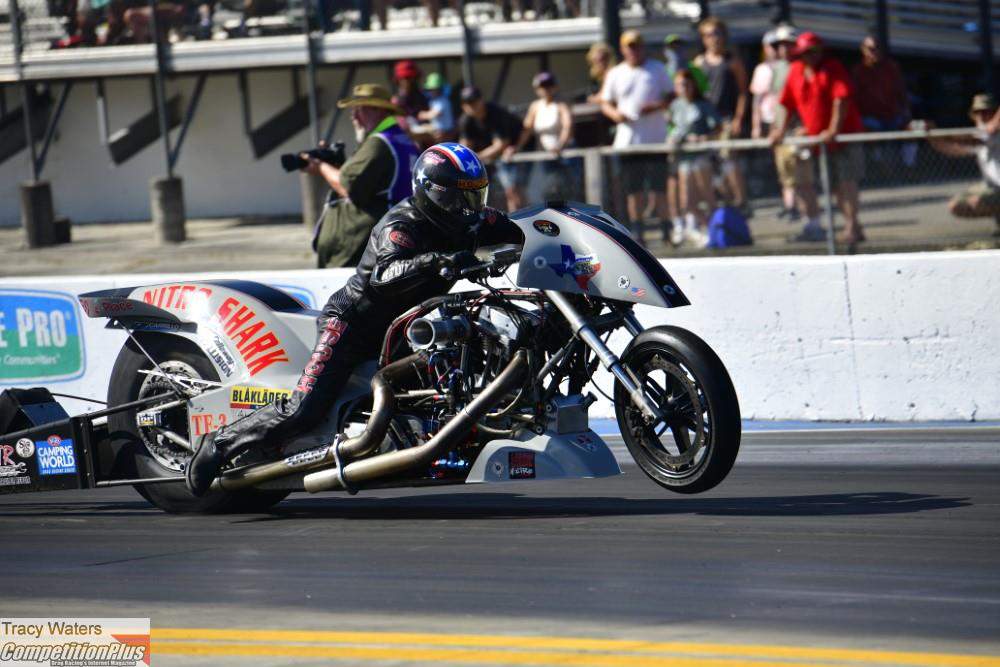 The Gainesville situation was kept under wraps until Turner made the video explaining why he didn’t race. That created a lot of post-event chatter about the state of Top Fuel Harley affairs.

“I think there were some things said on social media that ruffled their feathers,” Tharpe said, “but at the same time, I don’t think anything that was said wasn’t accurate in that communication (between NHRA and the riders) is not where it probably should be.”

With fewer races than were originally planned for NHRA Top Fuel Harley in 2021, Andras wonders how the class can build the popularity he believes it is due. After all, he, Tharpe, Turner, Bob Malloy and others provide some of the wildest, most hair-raising performance drag racing offers. Malloy holds the quarter-mile record in NHRA trim at 6.096 seconds, and Turner owns the speed mark at 237.75.

Even so, the Top Fuel Harley riders have alternatives in that they can compete in AMRA and Manufacturers Cup events. Tharpe said AMRA’s September event at Bowling Green, Ky., would’ve been a preferable option to NHRA near St. Louis on the same weekend before the latter was excised from the slate. The purse, Tharpe said, was identical, and “we get treated like Top Fuel” does by NHRA.

“We have other options, thankfully, that don’t require nearly as much money, we get treated real nice and we get the same purse,” Tharpe said, noting that the AMRA and NHRA winner’s slice this year is the same, $4,000. “But we’re glad we’re still racing with NHRA. They treated us good in Gainesville. We had great parking, and actually got us a little TV time when we weren’t going to get any. Who knows, maybe we can do a good job at these next four-five events and attract a class sponsor.”

The lack of a replacement for a class title sponsor baffles Tharpe and Andras.

“It wasn’t hard to sell sponsors on funding these races this year,” Tharpe said, “but we didn’t really get too far outside our comfort zone. (NHRA) approached Samson at the very beginning when they didn’t have a sponsor and that kinda got me sideways. I had worked hard to secure a sponsor, and it just didn’t feel right to me that rather than going out and seeking real opportunities they were going for what you might call low-hanging fruit. It definitely rubbed me the wrong way.”

Tharpe said the math is as simple as could be, and that the racers’ sponsors shouldn’t have to shoulder the burden.

If each team is going to spend between $750 and $1,000 per race in entry fees, tickets and the like, “that’s eight grand right there that goes to NHRA,” Tharpe said.

“If you strip out the deliverables (banners, on-air and public address mentions, a spot on the Manufacturers Midway), which are about $2,500, that leaves you with $7,500 for a purse. I see the deliverables as a good value.