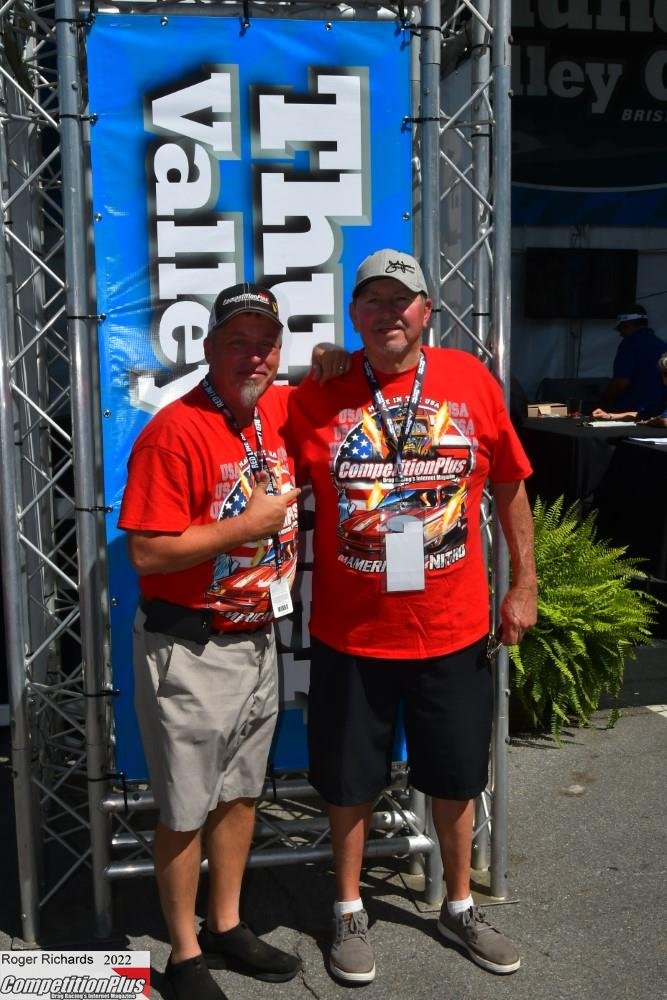 Bobby Bennett had a harrowing experience as a teenager at his South Carolina home racetrack, Spartanburg Dragway,

“Me and my dad almost got killed down there at Spartanburg Dragway, and my cousin’s the one who almost killed us. My cousin was running a front-engine dragster that used to be a Top Fuel dragster, but they had a 454 big-block Chevrolet in this thing. And when he was leaving the starting line, the harmonic balancer came off this car. It kind of looks like a five-pound weight at the gym. It came off his car and went whizzing across the return road. Me and my dad were standing there, talking, right at the base of the tower, and it knocked out the neon tube lights and knocked out about an inch-deep hole in the cinder block [tower] - went right between us. The thing never touched either one of us. I thought, ‘Holy smokes!’ If that thing had hit us, it would have decapitated one of us.”

It didn’t, thank goodness. He, of course, lived to share many wonderful memories with his father. But this past weekend, in the spirit of dad Bobby Bennett Sr., who passed away in 2003, the editor and publisher of Competition Plus made Fathers Day special for a gentleman from Spartanburg Dragway who also helped shape his life.

Forty-one years ago, Billy Fowler – a local drag racer who had the distinction of working for 28 years in NASCAR for Bud Moore Racing, with such stock-car stars as fellow Spartanburg native David Pearson and Jimmy Means – took “Little Bobby” Bennett to his first NHRA national event. It was at Tennessee’s Bristol Dragway, home of last weekend’s Thunder Valley Nationals.

So to mark the anniversary of this pivotal “field trip,” Bennett arranged for Fowler and his daughter Tonya to attend the Thunder Valley Nationals, and the Bristol Dragway staff helped him roll out the red carpet for them. (Plans were for Bennett to surprise Fowler last year, but COVID concerns pushed the surprise to this June.). 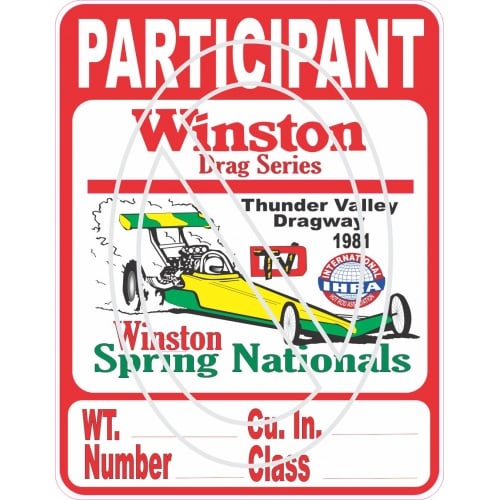 “We’ve had a good time,” Fowler said just before eliminations began Sunday. “This is the first time I’ve been back to the drag races since back in the early ’80s. It’s unreal from what it used to be. It used to be simple, but now it’s so high-tech and everything going on, all these high-tech cars.”

He said that when he was at Bristol Motor Speedway with his NASCAR colleagues, “we used to park over at the dragstrip. It’s totally different. There’s no comparison.”

Bristol Dragway, the ninth stop on the Camping World Drag Racing Series circuit, is just one of eight motorsports complexes in Bruton Smith’s portfolio that host 12 NASCAR and six NHRA races. Referring to Smith, Fowler said of him and the picturesque East Tennessee venue, “Old Man Smith, when he took all this over and started remodeling, he did a fantastic job. It’s a nice set-up.”

Bennett said he called Fowler and told him, “Make sure your health is good and you’re at the top of your game when Fathers Day comes around.’”

Fowler said, “What are you talking about?”

“I’m going to treat you to a weekend. I want you to come up to Bristol. I got you tickets for the Thunder Valley Club,” Bennett told him. “I got him a hotel room so he could come for more than one day to enjoy it. He hadn’t been back to Bristol since that day that he took me. That’s my way of giving back to someone who was being kind to a young kid when he didn’t have to be.”

Around that time, Fowler had been acquainted with Bennett Sr. through Bennett’s nephew, Steve Brock. “Steve used to drag race, and Bobby would come up to Steve’s house, to the shop, where he would work on his dragster. That’s how I met Big Bobby,” Fowler said. Later, he said, “[Little Bobby] hung out with my daughters. He was part of the family.”

Billy Fowler and Bobby Bennett Sr. became closer friends at Spartanburg Dragway, when Fowler raced, and the elder Bennett worked the gate and handed time slips to the racers. 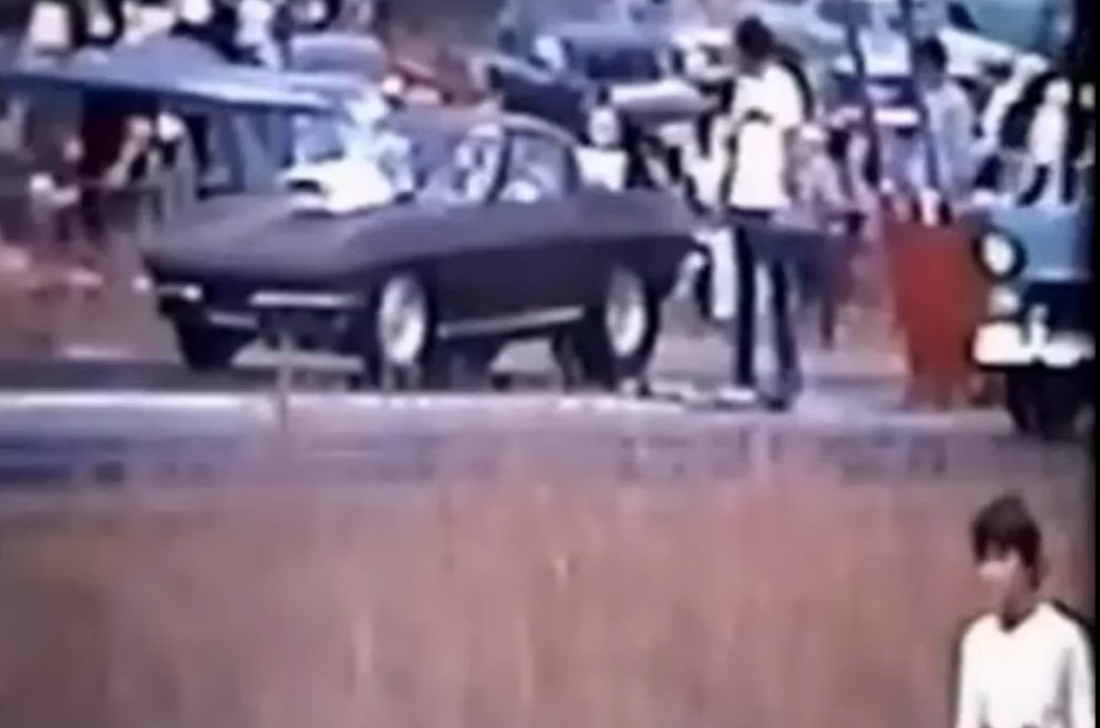 “Back in those days, we didn’t have printers at the track. Even the most podunk tracks today have a printer. We wrote it out on a business card,” Bennett said. “The lady up in the tower wrote it out, looking at the clocks, and then dropped it down a piece of PVC pipe from the second floor down to the bottom floor, and it fell in a cigar box. My dad picked it up, and then he would go out to the return road that ran in front of the tower and give the timecard to the driver. That’s how he met my dad. And I was a kid, running around, doing everything I could at the dragstrip, even making my own magazine.”

Fowler remembers it well. He said, “Down at the dragstrip where we raced at, he would stand at the timing tower and give out the timing sheets. Then he got to cleaning up the racetrack. He was picking up trash. Then he was an announcer. He got to doing a little bit of everything. Then he started doing his little paper sheets on how they qualified and who won, who lost, and everything. And he got to selling them little things for, like, 75 cents apiece, I think. And he started making money at it. It was lot of money. He made money. They paid him $100 just to announce down there at the dragstrip. The man who owned the track had a lot of money, and he paid Bobby. He took care of Bobby. 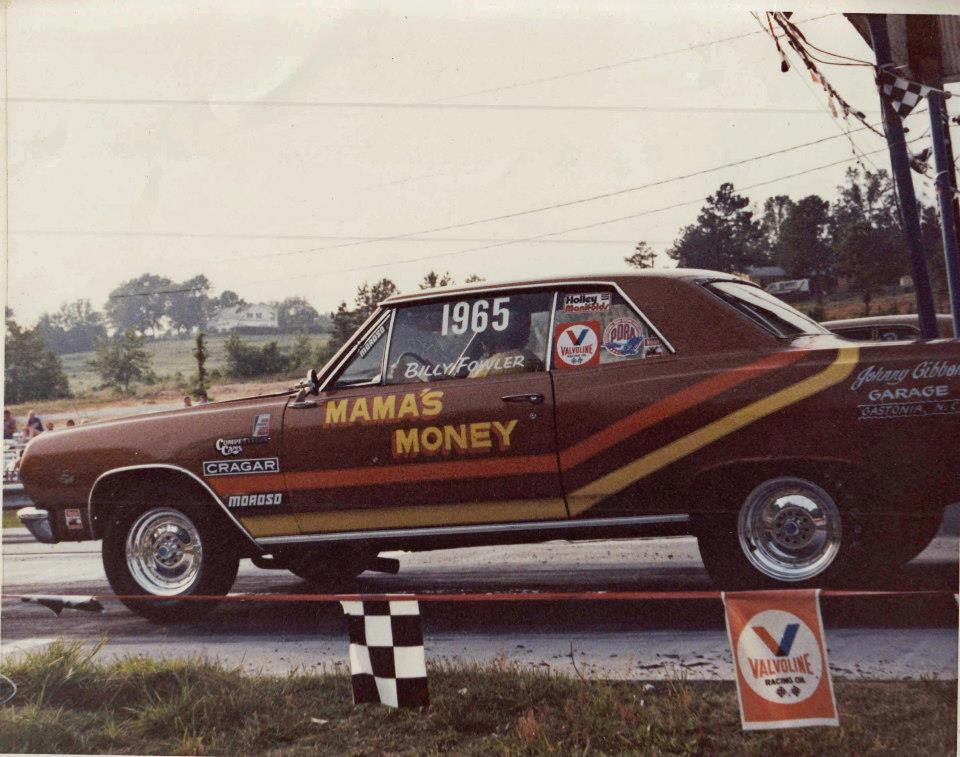 “[Bobby’s] daddy ran the gate, so he took up the money, his dad did. When it got time for Big Bobby to go home, Little Bobby had to go,” he said. And he saw how that disappointed his young friend.

So Fowler said he recognized “Little Bobby’s” passion for the sport and enjoyed encouraging it.

“He said to my dad, ‘You know, I was going to go to Bristol tomorrow, to the big race up there. And I’d like to take Little Bobby with me up there,’” Bennett said.

Bobby Sr. gave Fowler some cash for his son’s ticket and some spending money.

“And man, I had the time of my life. I had the time of my life,” Bennett said. “I can remember watching Warren Johnson racing Ronnie Sox in the semifinals just like it was yesterday. He came off the starting line, and I could see his hand on the shifter pull back second gear with the wheels in the air going by the Tree. I was like, ‘That’s beyond awesome! That’s where I want to be for the rest of my life!’ Forget the fact I could have been a baseball player. I wanted to do this for a living.”

He has, capitalizing on the early days of the Internet and persevering through the so-called ‘dot-com crash’ and recessions since 1999 to build Competition Plus into the drag-racing media powerhouse it is today.

“I’ll tell you, he has flat done himself some really good,” Fowler said. “That boy, from the first time he started drag racing, he’s always loved it. He lived and breathed it back when he was a kid. [Bristol Dragway] is the track where I took him to his first national event. 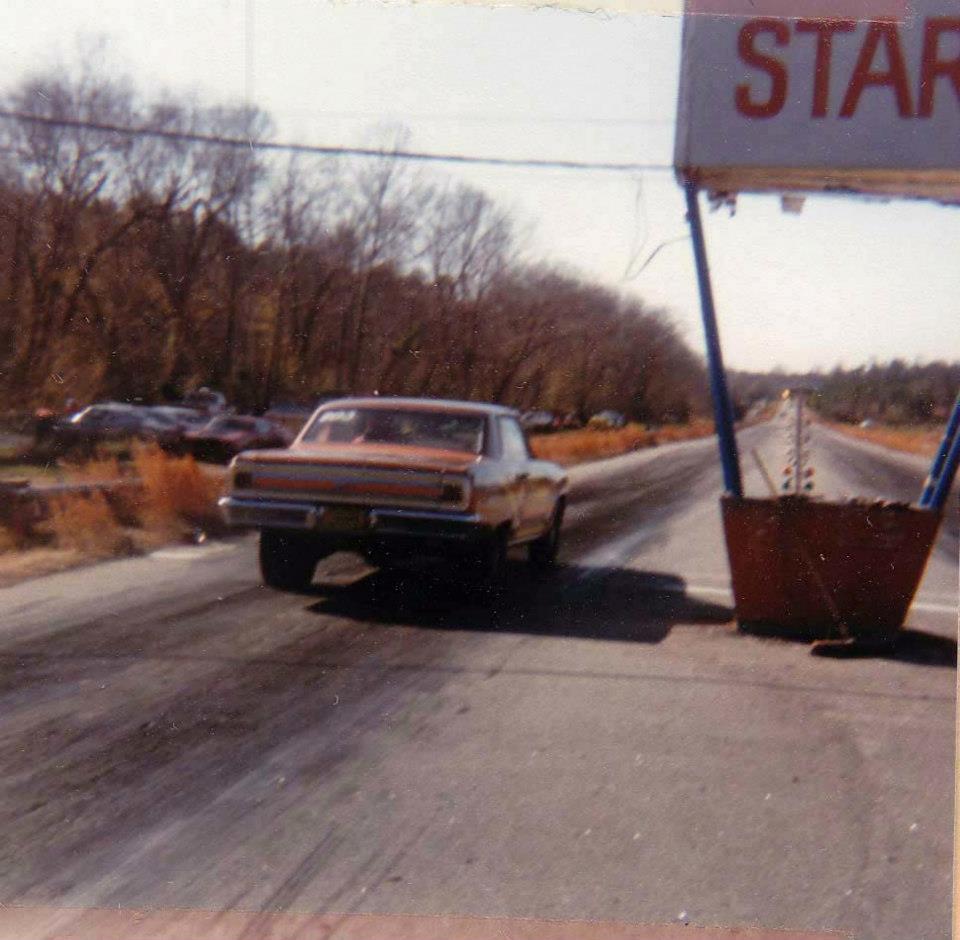 “He was running around like crazy. Bobby can’t never be still. He was on the go. He’d go from car to car, talk to the drivers and the pit crew people and everything. He got his word out pretty quick, so everybody would know him,” Fowler said. “I never would have thought he’d get as big as he did. He has really gone big in drag racing. I can’t believe what he’s doing with it. It’s unreal. I think he’s got a big business. He’s doing quite well with it.”

At one point, when “Little Bobby” was 13, Fowler was about to sell his 1965 283 Chevelle to Bennett Sr. Ultimately, he didn’t, but he did let “Little Bobby” make a few laps in it before the gates opened at Spartanburg Dragway. And this, of course, was when the younger Bennett was too young to have his driver’s license.

Fowler said, “That was just at the dragstrip [before the gates opened for the night’s program]. He didn’t do it very much, but he did it some. He really enjoyed it. He was probably 13 years old, something like that. His daddy was really scared for him to do that. His dad was going to buy my dragster and give it to Little Bobby, but he was afraid Little Bobby was going to get hurt. So he told me he didn’t want me to sell it to him. So I didn’t. So that’s when Bobby started getting into all this stuff he’s in now.”

That Chevelle didn’t tear up the track like Fowler’s wife did in her 1950 pick-up truck. “She was just a terror in Street class,” Bennett said. But this car of Billy Fowler’s ran in a class the track called Semi-Pro. “And that car ran right at the edge – it was, like 8-flat to 9.99 in the eighth-mile. 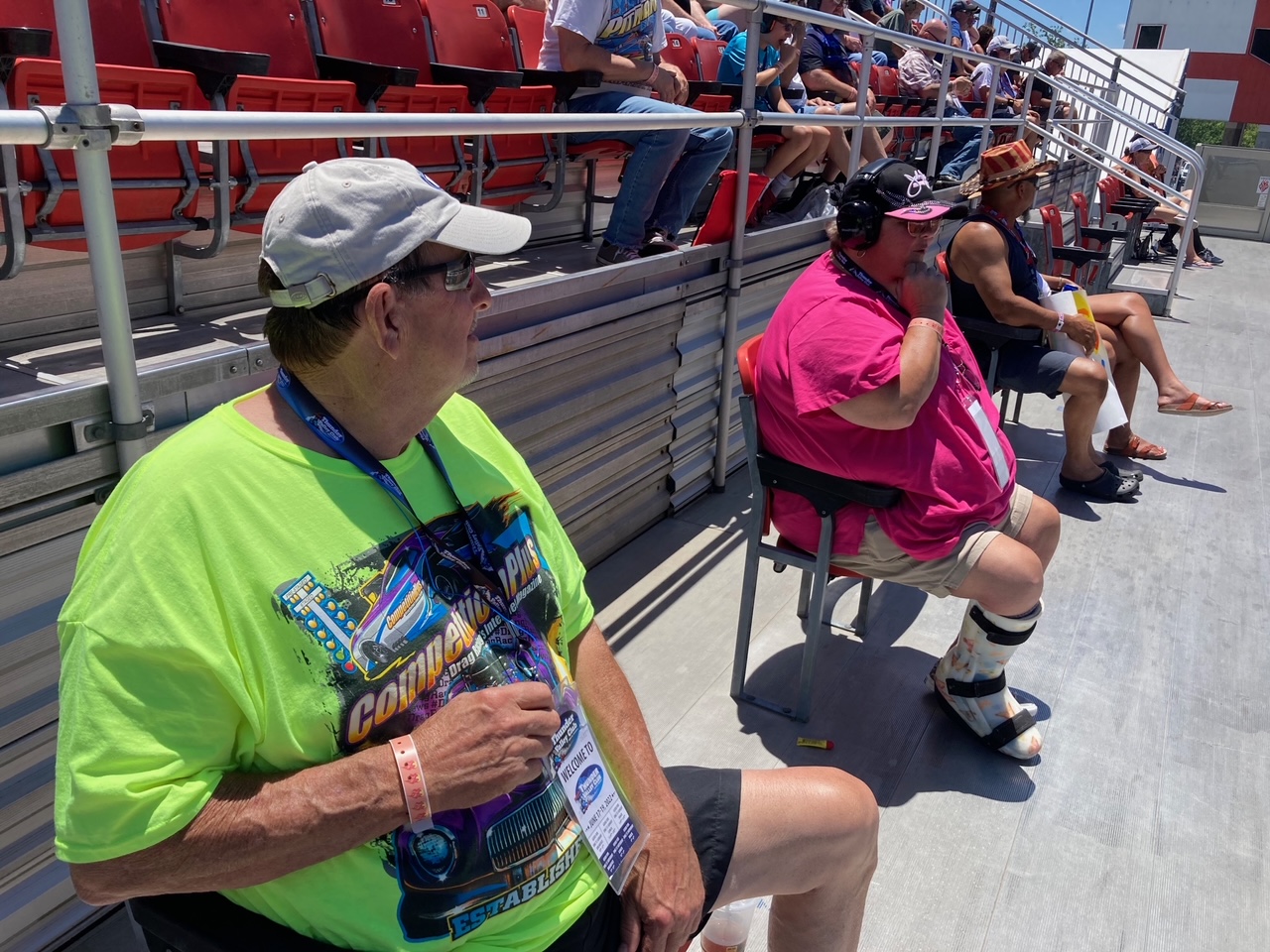 “So here I am, a 13-year-old kid, with an eight-second, eighth-mile race car, which was equivalent to 13 seconds in the quarter-mile. Well, that’s pretty fast for a 13-year-old kid to be driving,” he said.

Fowler gravitated to pastimes other than drag racing. He said, “I sold my dragster, and I got out of the business. We made some pretty good money, won some races. I guess I just got tired of it.”

But he was hooked again this past weekend after getting to visit with Mike Salinas, Tony Schumacher, and a few other racers, as well as now-retired Ashley Force.

“He never took me to another race,” Bennett joked, “so I might have ruined the whole experience for him.”

Clearly, that didn’t happen, for Bennett wrote in a Facebook post, “The look on his face and emotion in his voice was priceless.”

Bennett’s advice, based on Billy Fowler’s inspiration, was this: “Always invest in the kids. One day they will grow up, and it all comes around. No matter what I could have done for Billy, it will never equal what he did meant for me.”