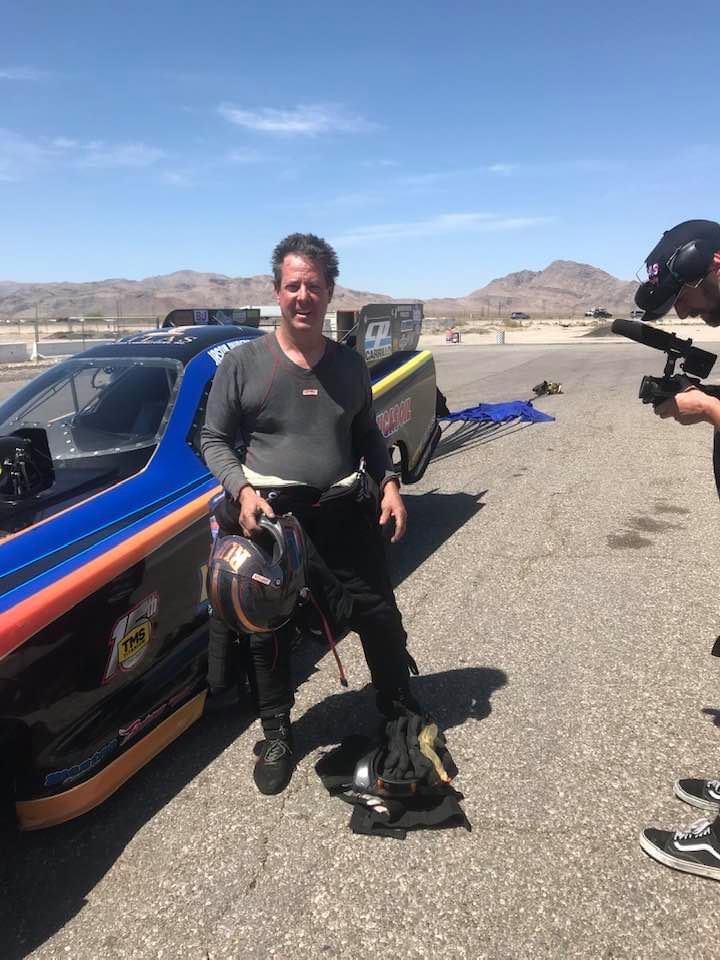 Last fall, Jason Rupert began the licensing process behind the wheel of a Big Show nitro-burning Funny Car. The experience got his attention. Five months later, another run further down the track had him revaluating his mission.

Rupert, on his first run at The Strip at Las Vegas to finish the procedures for his driving credentials, said the hit of the throttle on his Ford Mustang Funny Car "knocked the wind out of him."

An experience, Rupert added, which left him feeling that he'd launched on the starting line in the front seat and went through the lights in the trunk.

"I just couldn't believe how fast that thing was," Rupert added. "I went and talked to Robert Hight and Ron Capps after that run and it kind of calmed me down a little bit, but I almost was wondering if I wanted to drive that thing after that first hit."

Rupert came back the second time and was better prepared.

"I tightened the belts quite a bit more," Rupert said. The chin strap, I gave it more pre-load. It spun the tires pretty good and went towards the wall. I just moved it and then made it down there and begin to run 4.05, and that was pretty awesome."

"It was a fun weekend, but it was exhausting," Rupert said.

Rupert said he plans to make his competition debut either at the delayed NHRA Winternationals or in Sonoma, Ca., during the western swing.

"I'm really excited about it," Rupert said. "I feel a lot more comfortable now knowing what these cars are. I mean, anyone that gets out of one of those things and says, 'It's no big deal,' they're lying.

Of course, Rupert says he's speaking from excitement. But the feeling on Monday was much different than months ago in Bakersfield.

"Started getting into lock-up, and the thing was still pretty tame," Rupert explained. "I went to about 400 feet and felt like I was in pretty much in control, but when that thing goes into lock-up back there, it felt like I started driving and I was in the front seat. And by the end of the run, I was in the trunk."

Rupert knows he's in a new world, much different than the one where he won multiple series championships while racing a nitro-burning, nostalgia Funny Car.

"I have a lot of runs in the nostalgia and the alcohol cars, and I felt like I was pretty in control of those things," Rupert said. "But that big show deal, I mean, that thing you better be careful with that thing. You got to try to be in control of that thing, but if it does anything stupid, you just need to get out of it." Rupert was not the only Heritage Series racer upgrading his program during the "Monday Morning Nationals" in Vegas; Tony Jurado was also licensing.

" He had the same feelings. I said, 'What do you think?" Rupert recalled. "And he goes, 'Man, what did you think?"

"I said, 'I looked at that thing, and I was kind of like thinking, "Do I really want to drive that thing?"

Rupert said they both nodded, yes. "

And he goes, 'Yeah, that's what I thought too. It never stops."

"Of course, this wouldn't have been possible without the help of my family and friends, Lucas Oil, CP Carillo, GRP, and Atlas," Rupert said.