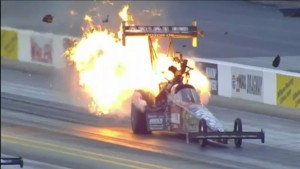 Terry McMillen's look of hurt and frustration told the story.

McMillen was out front in his race against Antron Brown when inexplicably his engine exploded, turning the injector hat into confetti. It also caused the engine to put down oil on the racing surface.

An emotional McMillen told ESPN3 he was done.

"It was spoken out of emotion, and this is an uphill battle," McMillen said. "I love what we do, all of our fans and our marketing partners. At the end of the day you have to ask yourself if you are really doing this with less resources than everyone else out there."

The point which irritates McMillen the most is, his engine issue came without warning and there was no way to prevent it.

"It was racing along and we were ahead, and it probably slipped a valve," McMillen said. "This probably cost me about $55,000 in damage. When you look at it from that point of view, I don't have the money to fix that kind of damage. I'm already digging well into my pocket just to keep things going. I want to stay around here because I honestly believe the NHRA's future is bright.

"Regardless, you have to look at the big picture and ask how much of this can we endure? We still have five races left."

McMillen said his mistake was in pedaling the car to stay ahead when he began to smoke the tires.

"Shouldn't pedal the car, and just coast and let them pass me ... that's not racing," said McMillen. "I'm here to win and represent my partners the best I can."

McMillen said its never his goal to oil the track ever.

'We really want to put on a great show for the fans, but right now I am at a point where I still owe the NHRA money from Indy. I qualified here, and that would have given me some money, but then I oiled it down again. Now I leave here with nothing, and it disrupts my cash flow pretty hard.

"I just need to look at things and reevaluate the direction we are headed. I don't even have the money to pay NHRA in trying to replace the parts we just blew up in order to race St. Louis. I'm mad, angry. There's no doubt the oildowns are our fault, been our fault. It's a racing issue, you can put nitro in the tank and everything can go right, and stuff still happens." 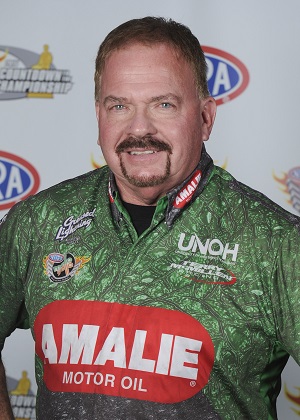 McMillen, if he decides to park, would be the second team to park. Steve Chrisman made a post on Facebook announcing his team was for sale.

"I just don't want to see us running off teams," McMillen said. "We have a great sport and great sponsor platform. I know we didn't have a full field here. There are cars that could run out here, but they are nervous about the oildown penalties. A lot of guys have just parked their car for the rest of the year. We have to come up with a better solution.

"I don't think there's anything that's going to stop these explosions or reduce the number of oildowns," McMillen said. "NHRA and teams have done a good job at containing the bottom end of these engines but what are you going to do about the upper half of the motor? There was nothing we could have done here. It was a racing incident and that bites. But, I knew what the rules were going into this season.

"I understand NHRA is trying to get prepared for the new television platform, but at the same time we gotta have race cars going down the drag strip. I'm frustrated and mad, and have no problem admitting when it is my fault. But some of it, is just racing."

NHRA has an incentive program that will reward individual Top Fuel and Funny Car teams who make it through the 2015 NHRA Mello Yello Drag Racing Series season without an oildown. A bonus fund of $50,000 will be divided among the top 10 nitro race teams with the greatest number of oil-free runs at season’s end.

The fines collected are utilized for equipment purchases, personnel training, new technology and support of the NHRA Safety Safari.