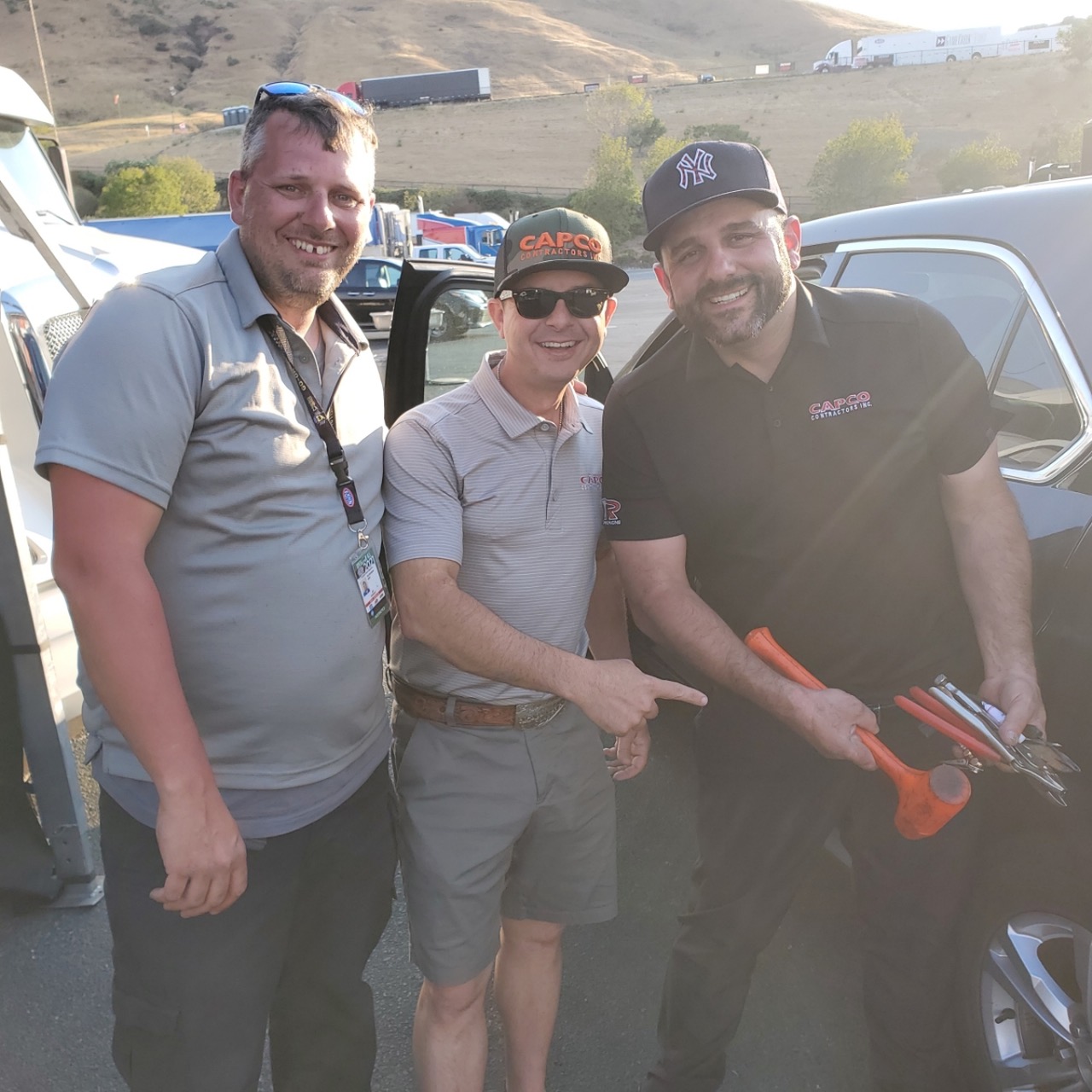 Steve Torrence and car chief Bobby Lagana reveled in the applause from grandstands of fans Sunday afternoon for winning the Top Fuel final round at the NHRA Sonoma Nationals.

But they were true heroes when almost nobody was looking, after the winners-circle picture-taking was finished, the TV cameras were packed away, and the crowd had gone home from Sonoma Raceway.

This Capco Contractors Dragster team that had earned three straight Top Fuel championships, that leads the points by a wide margin, that an hour or so before had pocketed its sixth victory in the year’s first nine events . . . that team set aside its celebration to help the father-son photographer team of Mike and Jeff Burghardt fix a flat tire on their passenger car.

But he soon realized that they were needing some help and thinking, in his words, “Aw, shucks, there aren’t many people at the track [to help].”

Lagana said of dad Mike Burghardt, “He was asking if we have some tools to fix a tire. I said, ‘Yeah, of course. We’ve got lots of stuff. What do ya got? We’ll try to fix it.’ He said, ‘We got a nail in the tire.’ It was a little more difficult than we thought, but we got it. Steve saw me running back and forth with stuff and he was wondering what was going on. He jumped down [on the ground] and was helping us. We got it plugged up. I’m thinking they made it home.”

They did – but not without grateful hearts and a desire to share the good news of kindness.

“I was impressed – actually shocked,” Mike Burghardt said. “They were celebrating winning. They were all having food and having a good time and laughing and stuff. And they broke that up and came and did this, for all intents and purposes, for a couple of nobodies.”

That’s not how Lagana looked at it.

“We help. That’s just what we do. Nobody even thinks twice about it,” the veteran drag-racing driver/mechanic/car chief said.

Moreover, he said, “Good thing we had a tire-plug kit. If we hadn’t had the tire-plug kit, it would’ve been tough. We carry a lot of things. We never complain, but let me tell you – some weird stuff happens to us. We’ve had incidents where you’ve got nails in three of your four tires. So we’re just always kind of prepared for stuff. Weird things happen – which is fine. It makes it interesting.” 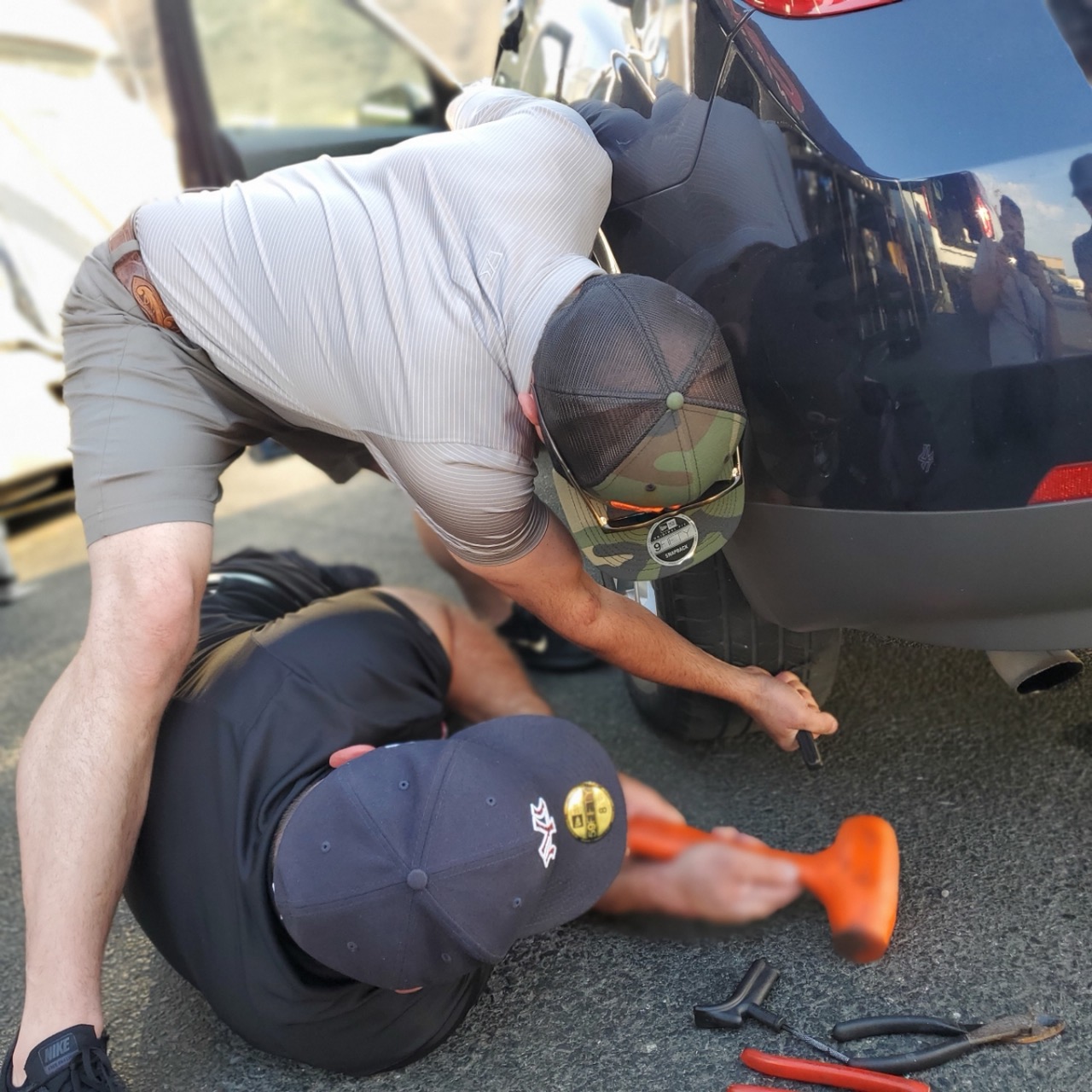 Lagana and his younger brother Dom never were Boy Scouts, but their motto has been “Be Prepared.” Referring to their late father, Bobby Lagana Sr., Bobby Lagana said, “I guess working on the race cars with the old man kind of made us a sort of version of that. We were definitely using MacGyver’s thought process just to survive.”

And the Burghardts, who live nearby at Oakdale, Calif., travel to many events on the Camping World Drag Racing Series tour, said they were thrilled to have asked Lagana for assistance.

The car was son Jeff Burghardt’s, and dad Mike said, “Before I know it, I got Bobby Lagana under the car, working the plunger to get the hole [in the tire] set. Then Steve shows up and looks at it. The next thing I know, Steve’s crawling under the car. He’s down there, telling Bobby Lagana, ‘Let me try this.’ A couple of crew guys came over and asked if they needed to get a jack to lift the car.

“And I’m thinking, ‘I’ve got Team Torrence here, working on my son's car.’ I’m thinking, ‘This is totally unreal. Nobody’s ever going to believe this,” he said.” I’ve got a three-time Top Fuel champion crawling on his knees, fixing my son’s car. It was pretty impressive.”

Burghardt said, “I want to let everybody know that there’s a lot of good people in this sport. In the world today, the only thing everybody talks about is how somebody was bad. That’s all the news is. But you know what? These guys didn’t have to do that. I really thought this was neat. This team’s got a lot of good people. This is auto racing. These people are really family. We are part of one big family, so we all kind of look out for each other.

“Steve is very competitive, and he gets ragged on for it,” Burghardt said. “People need to know this guy’s a real guy. And I want to say thank-you to him and Bobby Lagana. I can’t think of too many sports where you get a superstar who does anything for somebody else he doesn’t really know. This sport’s different. Drag racing’s special.”

Lagana said it took only about 15 minutes to repair the tire “by the time we rounded up the right tools.” Besides, he said, “people continue to do things for us, like all the support that Dom received last year.” [Dom Lagana is back at the racetrack, working with Torrence Racing, after many months of healing and rehabilitation following a serious auto accident last September.] “It’s pretty special.”