It’s been almost two months since Jon and James Herbert, sons of Top Fuel pilot
Doug Herbert, lost their lives in an automobile accident on Jetton Road near
their home in Cornelius, N.C. Since their passing, friends and family members
have sought ways to heal and to keep the memory of these two special young men
alive.

On Saturday, March 22, 2008, a
special ceremony will take place at Jetton Park. Friends of the family have worked
with park officials to dedicate a spot at the beach overlooking scenic
Lake
Norman to the memory of Jon
and James.

Rev. Jody Seymour of Davidson United Methodist Church and Jeff Tarte, mayor of Cornelius,
will officiate the ceremony. Two benches, one in memoriam of Jon and one in
memoriam of James, will offer a place for friends and family to sit and
remember, reflect, and begin to heal.

In a rare four-car showing for all of the Ypsilanti, Michigan-based Kalitta
Motorsports nitro-fueled entries, Team Kalitta took the opportunity Monday to
test and refine the tune-ups of its race cars at Gainesville Raceway after this
past weekend’s running of the ACDelco NHRA Gatornationals in Gainesville,
Fla.

The Mac Tools dragster team started “from scratch” Monday in an effort to
pinpoint the woes that have followed them since the end of the 2007 season. “We
basically took everything off of the car and started over,” crew chief Jon
Oberhofer said. “It was time to just step back and re-work the whole car.”

Doug Kalitta, driver of the “Big Red” Mac Tools machine, and his team have
struggled to get their hot rod to perform at the level that has seen them be
perennial championship contenders since Doug’s inaugural season in 1998, in
which he won Rookie of the Year honors. “It’s been tough,” Doug, a 43-year old
resident of Ann Arbor, Mich., said. “We know that our Mac Tools car can be one
of the most dominating cars on the tour, so it’s definitely been frustrating,
but I think we’ve taken the right steps now to get everything figured out and
get back to the level of performance we know we’re capable of.” 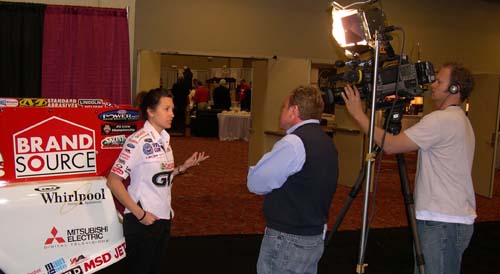 The torrential rainstorms that blew through Dallas did not dampen the excitement
level of participants at 2008 BrandSource Summit who were thrilled to spend a
few minutes with 14-time POWERade Funny Car Champion John Force and 2007 Rookie
of the Year and Funny Car rising star Ashley Force. The BrandSource Summit
brought together thousands of representatives from some of the biggest companies
including Whirlpool, Serta, LG, GE, Mitsubishi and many more. Fans lined up for
two hours to get autographs, pass along positive messages to the recuperating
elder Force and offer words of encouragement to Ashley, one of only two Funny
Car females competing at one of the highest levels of motor sports.

In addition to autographs, fans also snapped photos and gawked at Ashley
Force’s 8,000 horsepower Castrol GTX Ford Mustang which served as a high powered
backdrop. Both of the Forces enjoyed spending time with new and old fans. It
comes as no surprise to anyone who knows John Force that spending time at
sponsor appearances is as important as getting a win light during eliminations
at an NHRA POWERade national event.

Spring will soon make its long-awaited return, bringing with it birds
in song, flowers in bloom—and Mopar Performance HEMI®-powered 1968
Plymouth Barracudas and Dodge Darts in full-throated roar as they
compete in pitched battle in the 2008 Mopar® HEMI Challenge Race Series.

The performance gains would be substantial; The cost would be devastating to many ...

The topic has not even reached the NHRA’s radar screen, but a month
ago, Torco’s CompetitionPlus.com asked multi-time champion Greg
Anderson what would he feel about increasing the cubic inch for the
NHRA’s Pro Stock division.

Anderson admitted a cubic inch increase would be great for the NHRA's
Pro Stock class. Virtually every other one of his opponents said
the move would the final nail in the coffin for their racing efforts.

Torco’s CompetitionPlus.com discussed the idea with several teams in
the wake of the real possibility IHRA’s Pro Stockers will soon dip into
the 6-teens, leaving the five-second zone on the not-so-distant
horizon. The consensus was the extreme cost would never be justified by
the meager amount of publicity and performance gains they'd achieve. 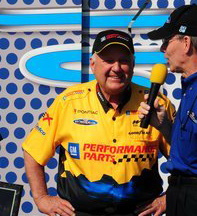 “Truth be known, we’ve burned two holes in the body because of it,”
Johnson said. “We did that in Valdosta where the downforce is
compressing the rear so much.

“The situation wasn’t so bad in Gainesville but when we get to a
facility that is bumpy at the finish line – then we’ll have problems.
Someone is going to get in some serious trouble past the finish line.
There is too much downforce for these cars.

There are times when the difference between winning and losing is attitude.

Even though six-time IHRA Top Fuel world champion Clay Millican didn’t
light a single win-light during the NHRA ACDelco Gatornationals in
Gainesville, Fla., he and his SinFuel Choppers Top Fuel dragster
presented by Torco Race Fuels/Knoll Gas might as well have scored the
overall victory.

The real triumph was in providing a measure of encouragement for team
owner Evan Knoll, who was sidelined earlier in the year with serious
health issues. Millican drove his way into a tough sixteen car field
with only one testing weekend’s worth of preparation.

All of a sudden, the sting of a first round loss doesn’t burn as much for Cory McClenathan. The 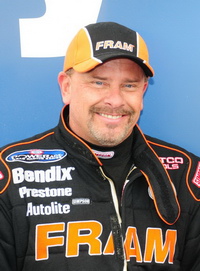 Cory McClenathan admits drag racing has been good to him over the years. He's just happy to give back to the sport today. (Roger Richards)

Fram-sponsored
driver from Avon, Indiana lost in the first round during the NHRA
Gatornationals to Hillary Will but the impression of a Saturday
afternoon encounter remained emblazoned in his memory banks.

McClenathan, a 29-time winner in Top Fuel, was asked by a family of
race fans to place the ashes of their patriarch inside the parachute.
He obliged without hesitation.

“I do this every once in a while,” McClenathan pointed out. “This is
twice we’ve done this in 2008. How can you say no to a request like
that?”

Tony Pedregon pointed out on Saturday during the NHRA Gatornationals
in Gainesville, Florida, he didn’t subscribe to the superstition of the
No. 1 qualifier jinx. On 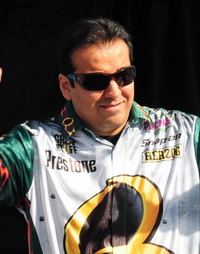 Tony Pedregon wanted to use this event to earn his way back into the top ten. Sunday's Gainesville victory made it happen.

Sunday,
he showed why. The two-time NHRA world champion from Torrence,
California drove his Quaker State-sponsored flopper to his first
victory of 2008 by stopping Gary Densham in the final round.

“Qualifying number one anytime is an accomplishment in itself but to be
able to go into eliminations with that kind of pressure, and we had
some pretty tough opponents, this is a good day,” said Pedregon. “The
weather hung in there, it got a little warmer than the crew chiefs
would've liked, but under these circumstances the teams who can adapt
better are going to have an advantage.”

Sometimes championship prowess doesn’t mean scoring low elapsed time
every single round. Even though Pedregon nailed the best run of the
first round, he did what was necessary to win from then on.