MIKE BAKER GETS PROMOTION AT IHRA

Michael Baker has been promoted to IHRA Senior Director of Racing
Operations. Baker, who has spent the last decade as Director of
Competition and Technical Services, will have expanded duties that
include acting as internal liaison between IHRA’s Competition and
Communications departments.

He will retain all responsibilities
regarding development of IHRA rules, supervision of IHRA’s six Pro-Am
divisions and on-site national event rules enforcement.

Eight more deaths in a street racing incident this past weekend and many more
seriously injured. I don't understand it.  Just a few weeks ago,  we had two
of our fellow racers and friends killed right here in Alabama.  As a matter
of fact, one them drove right past MMP just to have a fatal street racing
incident 90 miles away. .

I am a rookie track owner-operator, so every
place I go I ask people, "Do you like drag racing?" Last Saturday,  I got an
answer that scared me. I was talking to a  young lady (an employee of a local
business) and I asked her the same question,  "Do you like drag racing?"  She
said "I have never  been to a drag strip but my friends and I enjoy watching
the street racing that goes on in Montgomery".  I asked if she heard about
the people who had been killed the night before; she had not and it scared
her to death!

I gave her free tickets to Montgomery Motorsports Park and
invited her and her friends to come out and enjoy running their cars and
watching during one of our Friday Test and Tune sessions (beginning March 7),
to race in a safe and controlled environment. She was very excited at that
idea.  But I want to do more. 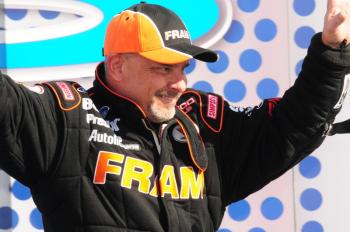 FRAM Top Fuel dragster driver Cory McClenathan is looking to carry the momentum
of his consistent performance at the season-opening Winternationals into this
weekend's NHRA Nationals at Firebird Raceway. 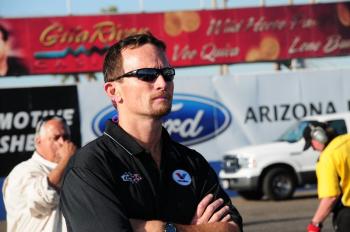 With the first of 24 NHRA POWERade Drag Racing Series national events of 2008 in
the books, "Fast" Jack Beckman is poised for an improved performance of the
Valvoline/Mail Terminal Services Dodge Charger R/T Funny Car he drives for Don
Schumacher Racing in this weekend's second national event of the
year.

Beckman advanced to the quarterfinals at the season-opener in
Pomona, Calif., and left tied in fifth place in the point standings with three
other drivers. Not a bad way to start off a season, despite experiencing some
new-car glitches. This weekend's NHRA Nationals at Firebird Raceway, just
outside of Phoenix, should see a revitalized team effort.

"We're a top-10
team right now," said Beckman, who still holds the national speed record of
333.66 mph he set in 2006. "We didn't run as well as we would have liked to have
run in Pomona, which is the bad news. The great news is that before the
Valvoline/MTS guys loaded the car to leave we found what the problem was in that
second round. We had a fuel control valve that was sticking. We could make a
good, hard, fast run and get good data on the computer, but in the next run it
would go out and drop a cylinder, and the data wouldn't match. We
trouble-shooted that with the help of the other DSR crew chiefs and the
Valvoline/MTS guys narrowed it down.

Gordie Rivera finished last in Pomona's qualifying but that didn’t hurt
his feelings one iota. In fact, he'll be in competition this weekend
during the NHRA CSK Nationals in Phoenix, Arizona.

The longtime veteran from Yuma, Arizona, has been pulling the gears in
NHRA Pro Stock competition since 1970. He used to run in the
competitive circles and finished as high as fifth place in the points
during the mid-1980s.

“Well, we'd like to be a little more competitive even though we don't
have the financial backing to kind of do that stuff in research and
development,” said Rivera. “For what we do I think we get it out of
there. We're doing pretty good with what we've got. 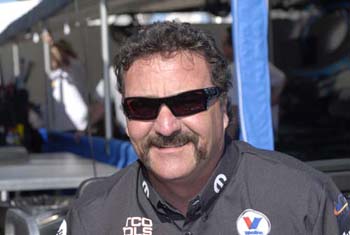 Gary Scelzi will bring out his new Brad Hadman chassis in Phoenix for testing. If that goes well the car could run Gainesville.

This new Hadman chassis will make runs during the
traditional post-event test session at Firebird.

Scelzi told Torco’s CompetitionPlus.com that this season he
would be driving a chassis he was going to pay for himself that would be built
by his long time buddy,
Brad Hadman.  When that car did not make
it to , Scelzi
began the season in the Murf McKinney-built car that he drove last year.

“What happened was that all of the last minute changes that
came down while the car was being built meant that it couldn’t be ready in
time,” Scelzi said.  “NHRA didn’t make up
their minds until the last minute.  Brad
was working on dragster chassis until the last minute because we didn’t know
what the tubing size was going to be.  We
thought it was going to call for .095-wall tubing, but we didn’t want to build
a car that we would have to throw away in June (when all of the new F/C chassis
specs go into effect). 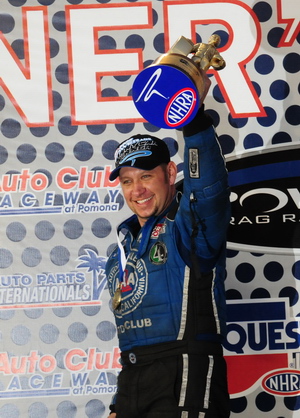 Just twenty four hours before Hight’s
dramatic win at the 48th annual CARQUEST Auto Parts Nationals in
Pomona the level of confidence Hight felt was somewhere between low and
lower.

Now the 38 year-old
, resident is
excited to be heading back to Firebird Raceway with the No. 1 points position, a
consistent race car, and momentum on his side.

“I am definitely looking forward to getting
back to Firebird. Last year we were in the final with Tony Pedregon and we lost
the race at the top end when we had a malfunction in our Auto Club Ford
Mustang,” Hight said. “We were going for a national record to beat or back-up
our 4.636 second run from earlier in the race (last year). If we get good
conditions there again I think we can put up some more big numbers.”

Tom
Hammonds admitted he sacrificed much of his 2007 season but did so with
a bright future in mind. He’s hoping to write a new chapter in the book
this weekend.

Mon, 2008-02-18 15:40
For the first time since its introduction as an exhibition category in
2001, the Pro Modified division could be absent from this year’s NHRA
Gatornationals in Gainesville, Florida, and beyond that, forever.
Reportedly, two key players in the NHRA Pro Modified sponsorship
fraternity withdrew their support in the last week citing the NHRA’s unwillingness
to offer a future of the class as well as a reasonable contract. Pending an 11th
hour savior, the division could be history leaving as many as 23 teams
re-evaluating their 2008 plans.
NHRA Pro Modified series coordinator Matthew Brammer couldn’t offer a solid
plan for the future of the class when asked by Torco’s CompetitionPlus.com
regarding the status of the 2008 season.