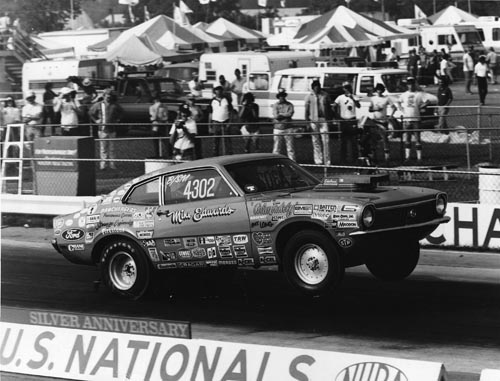 EDITOR'S NOTE: Mike Edwards dominated the 2009 NHRA Pro Stock like few have ever done. While this title was Edwards' first as a professional drag racer, it wasn't his first championship. Edwards captured the NHRA's Modified eliminator title in 1981 and then the class was discontinued, denying Edwards the opportunity to run the No. 1 on his car in championship defense. Fifteen months ago, CompetitionPlus.com ran an article on the time Edwards won a championship as a sportsman racer. We felt it appropriate on a slow news day to rerun this informative article.

Whether or not Mike Edwards ever wins another national event, or sets a world record, his name will be forever etched in the history books of  drag racing. His accolades come not as a professional drag racer but as a dedicated sportsman racer.

In the class Edwards competed, dedication is an understatement for those who chased the titles throughout the United States and Canada.

One week a racer could be at the cutting edge of domination and the next week, with a swift stroke of the pencil, could be battling for their mere existence.

Edwards raced in the legendary Modified eliminator category, a division filled with a plethora of screaming small-blocks, four-speed mid-1960s Corvettes and first-generation Camaros. Running a close third were the Novas and Chevy IIs. 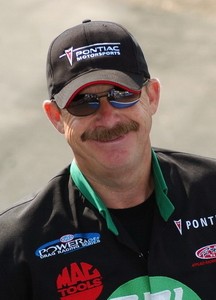 Since coming to the professional ranks in the early 1980s, Edwards has been a dyed-in-the-wool GM racer. That’s why it’s ironic that his inclusion into drag racing history is with a small-block Ford Maverick.

Edwards cherishes those old Modified memories and while he doesn’t dwell on his success in those days, he smiles when reminded he was the last driver to win a world championship in the class.

“Yeah it’s pretty cool, I guess,” said the soft-spoken Edwards, when the aforementioned line was uttered in his presence. “I never thought of it that way but I cherish those days. That’s my roots. I really came up through the ranks there. I’m still missing that class. I know we have Comp now too but I can’t help but miss it. It just seemed like back in the days that Modified class, everyone enjoyed it. I really cherish the time that I had to run that class.”

Edwards ran the Modified division with authority and a humble nature. His personality was non-confrontational, but the car he drove was anything but a pushover. 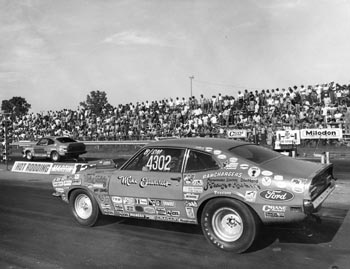 "You could race pretty heavily, go to 8 or 10 races a year and it wouldn’t cost a whole lot. The whole class was just fun, the indexes were able to let you be real competitive back then. I just enjoyed running that class." - Mike Edwards on racing Modified eliminator.

He competed in the B/Super Modified, a pounds-per-inch division, which ran on a mid-to-low ten-second index. The former Arlen Fadely Super Stock & Drag Illustrated project car did battle with a 302-inch engine shifting a Doug Nash 5-speed transmission on a ten-and-a-half inch tire with a Maverick body.

Edwards said the Modified eliminator heavy-hitters hung out in the Super Modified division.

“If you showed up for Indy in C/Super Modified you better have a lot of gas because you’re going to go a lot of rounds,” Edwards said. “When they first came out with that class, they would let the canted valve Ford run C. We started dominating and they took it out and made us run A or B. I switched over to B and ran real good there but it seemed like the Super Modified were the best. That’s a ten inch tire and a 750-cfm carburetor. They weight over 3400 or 3500 pounds so it’s hard to hook those little things up.”

For Edwards, the moderately inexpensive class was a purists division that carried a lesser price tag than Comp eliminator and an opportunity to race against other stick shift racers since Super Stock was largely comprised of automatic cars.

“You could race pretty heavily, go to 8 or 10 races a year and it wouldn’t cost a whole lot,” Edwards recalled. “The whole class was just fun, the indexes were able to let you be real competitive back then. I just enjoyed running that class. There were a lot of good cars in [NHRA] Division Four, that’s the division I ran in.”

Edwards raced against the best of the best Modified had to offer and didn’t even have to go to the nationals to gain the experience.

“If you could win Modified in Division Four you were pretty hateful,” Edwards beamed. “I was fortunate to do that a couple times. That’s back when Bear Barrilleaux ran the old Volkswagen, he was so hard to beat.

“Then you had others like Dick Maris, David Nickens, you could go to Houston and just about fill a Modified eliminator event, there were that many cars there. I mean good cars, I miss those times. I’m just blessed and fortunate I had a chance to race back then.”

The rules makers in Modified eliminator could be downright brutal in maintaining parity as Edwards recalled. There was no formula in place such as the Competition Index Committee utilizes today. A good day on Sunday could obsolete a combination on Monday. Or on the spot, you were adjusted.

“If NHRA thought you had an advantage they would adjust you,” Edwards recalled. “I know Buddy Ingersoll, when he was running that turbo Pinto he got hit .15 in the staging lanes at Pomona. They didn’t know how fast the car would run. He just smoked everybody and they adjusted him right there on the line. Buddy had a turbo he would just turn it right back up. They took it to a point that he had the thing running on the edge and breaking the little old four-cylinder. He won a lot of races, though.

“That’s the fun part about Modified back then is you could build an off the wall car that could do something like that. That’s what made it fun.”

Modified provided the right setting for Edwards. This class was similar to Competition eliminator where drivers would qualify against their index and battle their way into the top thirty-two positions. The NHRA U.S. Nationals provided a unique challenge with class eliminations and an expanded 64-car field.

“It just seemed like in Modified everybody was competitive, I don’t know if it was just the way it was back then,” Edwards said. “There just weren’t any easy runs. That’s what made it such a good class I think. It was a bad day when they took that class away from us and for a lot of people. A lot of people, actually - I guess, quit racing. You know their cars wouldn’t be competitive in Comp; they had the opportunity to run Super Stock, that’s a great class, but when you build a car to run a class. You put all your time and effort into a class. It’s tough to move into another class so I regret it for me and everyone who was in that class. I cherished that class.”

Those who raced Modified didn’t take the elimination of their class in passing. In fact, in the midst of Top Fuel eliminations, the Modified fraternity staged a parade on the return road in front of the spectators.

“I was in the parade,” Edwards admitted. “If I wasn’t in the front, I was close to it.”

Modified was absorbed into Comp and Super Stock to make room for a then up-and-coming tend of Pro Gas, later renamed to Super Gas. This new style of indexed bracket racing signaled a changing of the guard in sportsman racing.

There were no tears or lamenting over what would no longer be, just a signal to Edwards the time had come to move up the ladder into the professional ranks.

“I was just disappointed,” Edwards said, recalling the slow ride down the return road. “I wasn’t sad, just disappointed more than anything. But I guess you look back and it was something they felt like they had to do. I don’t know the reasoning. I never got the reasoning. But hey it’s over and done with. It was tough for all of us.”

Edwards admitted that something had to go to make room for the index bracket racing crazy, but added Modified was the wrong place to cut.

“I would’ve looked another way because I’m telling you the blue collar fans loved Modified. Period.”