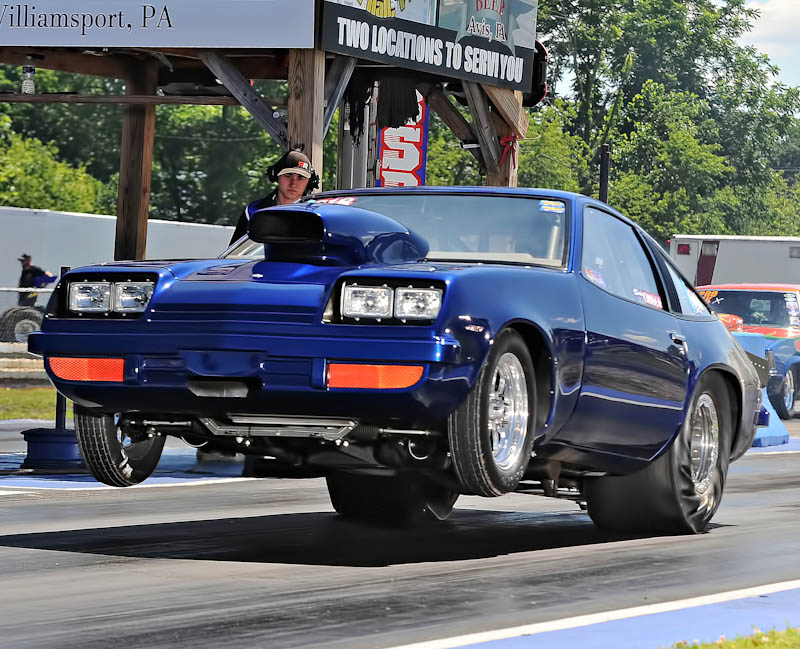 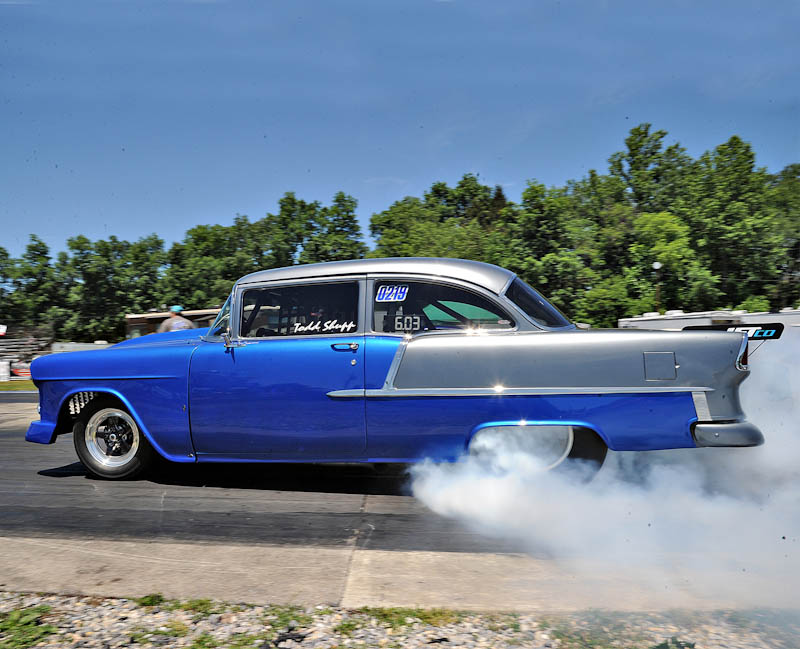 The three-day race came to a close today with $10,000 awarded to one last winner, except…

After two days of gorgeous weather with low humidity, Mother Nature may have said, “Enough is enough.”

Halfway through the third round of eliminations, the rains came essentially completing the event. Even if the rain stopped, it would take hours to re-prep the track. With Sunday as Father’s Day and most wanting to be home with their families, the executive decision was to go back to all second round winners, as if third round never began. The purse was then split amongst those second round winners.

“We apologize for this but there really isn’t much we could do,” said Burruss. “We can’t thank everyone enough for participating and we hope to see everyone our next event, the Fall Brawl in October. For 2021, that dream is going to be expanded with a second race; the Fall Brawl; held back at Mason Dixon Raceway in October. Pre-entry for that event began today and for more information, visit www.muttandjeffpromotions.com.

“This has been a great event,” added Burruss, “but it wouldn’t have been possible had I have a great crew; Tina Mohle, Kelly Russell, Dave Lane, Mark and Jim Decker, Jason Overstreet, Andy Dolan, Kathy Gerhart, Mar and Christina Coover, Ray Thurston III, Scotty Bodmer and Blaise Raia. Each of those have believed in the dream as much as we do and it’s to their credit the vent is the success that it is.

“I also can’t thank enough Mike McCracken and his Beaver Springs Dragway crew for allowing us to hold the event here and keeping it in tip-top shape every day,” added Burruss. “That has led more racers to see just how great the facility is and want to attend even more.”

What began seven years ago with only 32 race cars at South Mountain Raceway in southern Pennsylvania, is now a reality that will continue to grow. 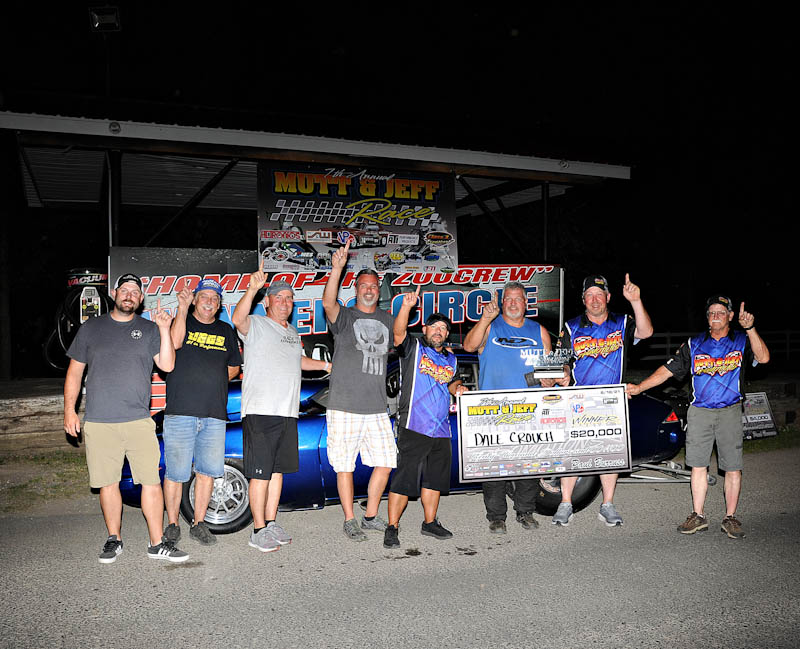 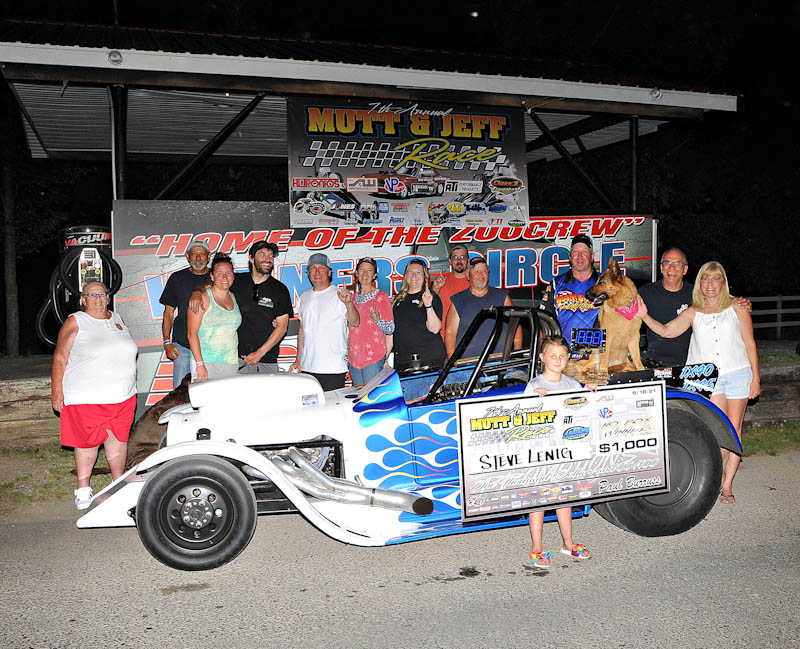 With all of the action being streamed live as it happens by MotorManiaTV.com, eliminations began early in a very timely fashion. With $20,000 on the line for one lucky winner, racers were locked and loaded for win lights. Also on order for today was the Door Car Shootout with a limited 32-car field with $4,000 on the line for the winner.

First up as the day advanced was final round six of the Footbrake class where Scott Lenig defeated Soggie Dunn to advance to round seven of the Top Bulb class.

In the meanwhile, the Top Bulb racers left to do battle in their sixth round were Dale Crouch, Mike Barber, Joey Harrison, Brad Northrop, Mike Shupp, David Shaw, Tim Sansone, Lane Kahley, Bill Moroun and Bill Prest Jr. Survivors of that round were Kahley, Sansone, Harrison, Shupp, and Crouch.

Round seven, six cars left; four of which were door cars. First up, up was Footbrake winner Lenig against Sansone with another round win for the Footbrake crowd. Next up was Crouch and Shupp, with Crouch moving on. In the final pair, Harrison defeated Kahley to make it an all-door car semifinal.

With Harrison and his door car earning the odd car bye run to the final, it was Crouch and Lenig doing battle with Crouch taking the reaction time advantage to move into the final round against Harrison for $20,000. A Chevrolet Monza versus a Chevy Blazer.

Final round and only .006 separated the pair in reaction time with Crouch running dead-on his dial with an “9” to take home $20K.

In the final round of the Door Car Shootout, it was Colby Imes against Chuck Wishard with Imes holding the reaction time advantage and running dead-on his dial-in with a “0” for the win. 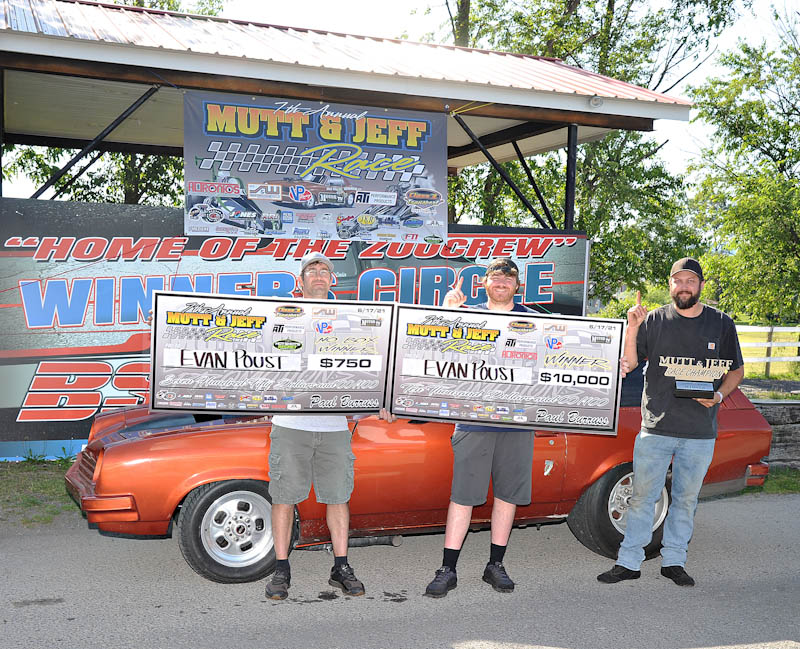 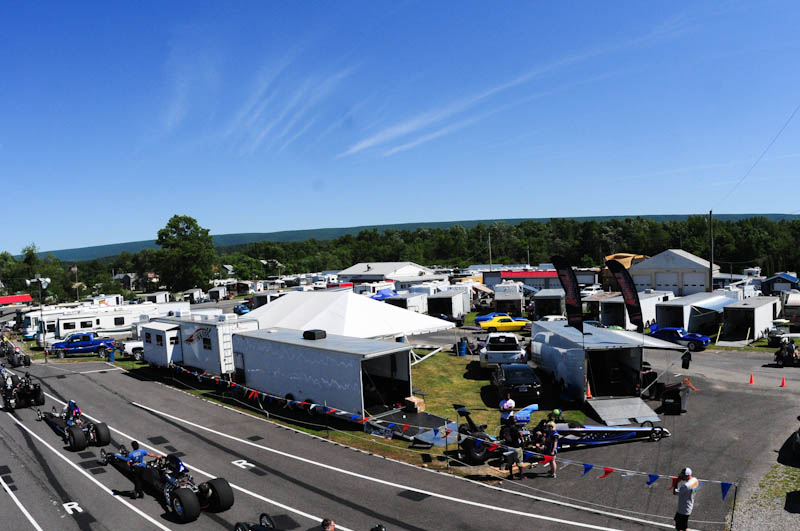 For 50 years, Beaver Springs Dragway, located amongst Amish farmlands in central Pennsylvania, has hosted a number of big events, maybe though, none bigger than the seventh edition of the Mutt & Jeff Promotions big bracket race.

Built in 1971 as a 30-day wonder by “Beaver Bob” McCardle and his family, the track is now owned by Mike McCracken and his Zoo Crew Racing organization. When built, the order of the day was pick-up trucks, open trailers and other flat-towed race cars. Today, quite a bit has changed in that regard and for this weekend, the facility is stretched to its limits with motorhomes and stacker trailers carrying multiple race cars. A limited pre-entered field of 250 racers came to do battle for big bucks.

“We’re over the top excited to get this event underway,” says Mutt & Jeff Promotions promoter Paul Burruss earlier in the week. “With a great weather forecast, along with a great Mutt & Jeff staff along with the track’s staff, this is going to be great event.”

Today’s race featured $10,000-to-win for the all-run field. Also on tap for today is a limited field of dragsters vying for $4,000-to-win. In addition to the purse, thousandths more in random prizes were given away as part of the day and will continue all weekend. Because of the great weather, time trials began promptly at 10:00 with every entrant afforded one time run. By 1:00, eliminations were set to begin after the traditional singing of our National Anthem.

Footbrake racers were run separately down to one winner, with Jesse Alberts and Evan Poust facing off with Alberts turning on the red-light to advance Poust to the sixth round of the Top Bulb box class after round five of the top bulb cars. 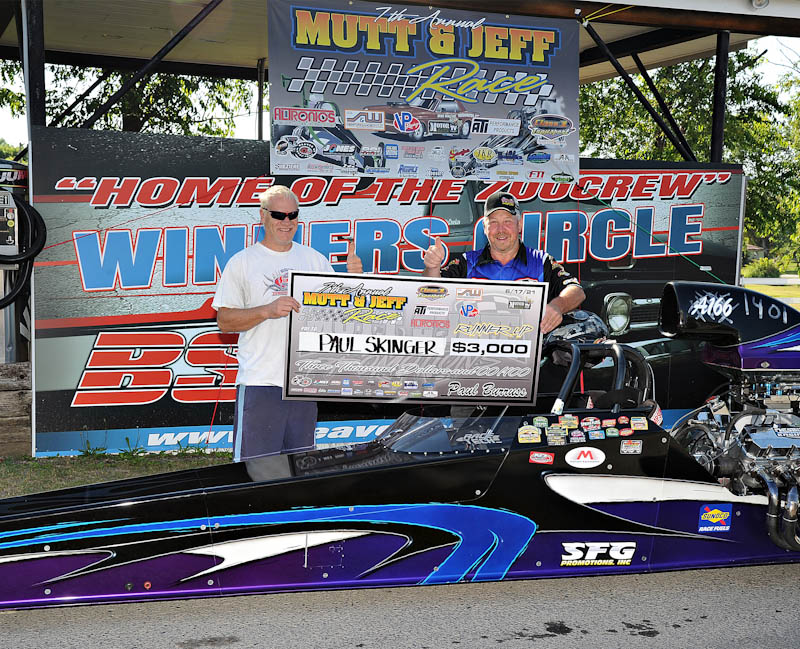 First up in round six were the two door cars of Shrawder and Poust with footbrake winner Poust taking the win. Next up, Castetter and Davis squared off with another door car win by Davis. Finally, Skinger and Decker faced off with Skinger moving on to the semifinals where at three cars left, Skinger will receive the odd car bye run to the final. Two door cars and one dragster left for $10K.

Semifinals and the Cinderella Footbrake story for Poust continued with a win over Davis, setting up the final round of a dragster versus door car. A New York versus Pennsylvania final round and the Footbraker left first with a .002 reaction time to hold off Stinger wheeling Jimmy DiCiacco’s dragster for the big $10K win.

In the 32-car Dragster Shootout, the two finalists were Bill Prest Jr. and Cody Hoover. Only .005 separated them at the starting line but a double break-out gave the win to Prest to close out the night. 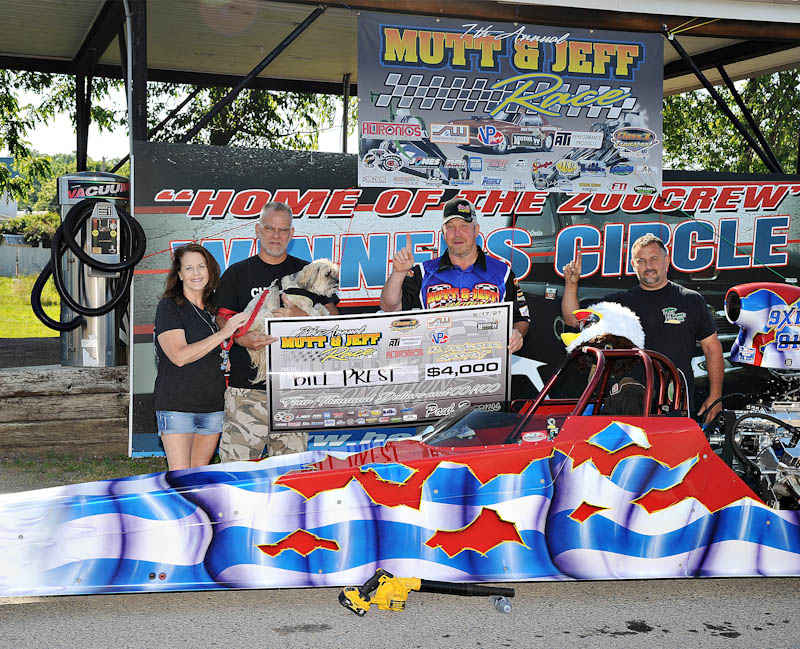 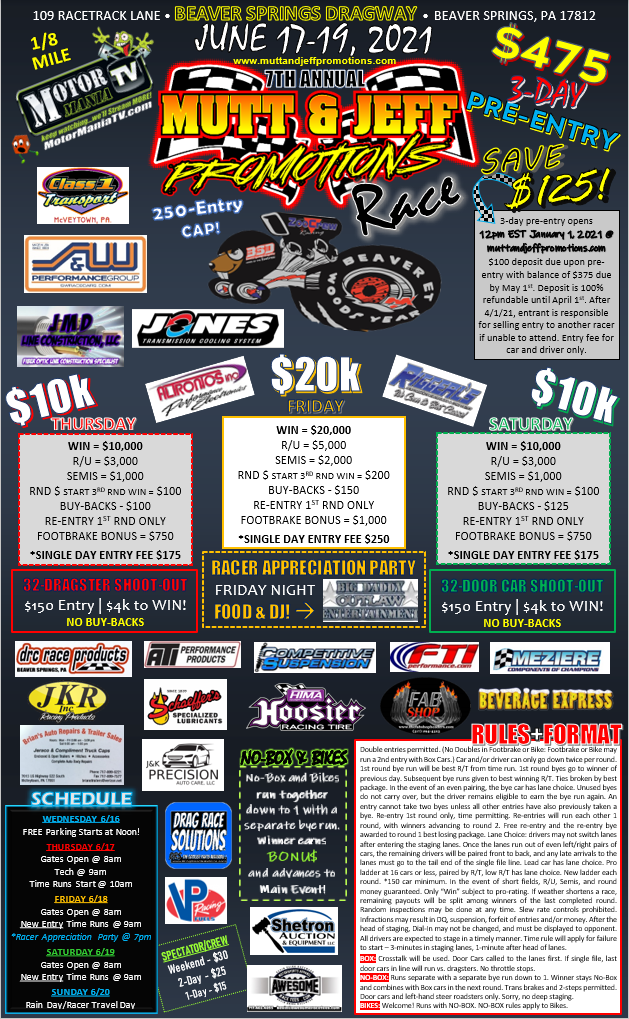 In what was a long-running comic trip beginning in 1907, cartoonist Bud Fisher created the concept of two mis-matched characters, Mutt and Jeff. Over a decade ago, two almost similarly unlikely friends, Paul Burruss and Dylan Griffey began racing together known as Mutt and Jeff.

Now seven years later, their Mutt & Jeff Promotions Races have been on the minds of bracket racers in the northeast corner of the country. This week, hundreds will descend upon Pennsylvania’s Beaver Springs Dragway to do battle for thousandths of dollars in prizes along with more in random product and giveaway awards.

“We’re always looking forward to visiting Beaver Springs Dragway,” says Burruss. “The track owner, Mike McCarcken has done so a great job transforming that facility into a great place where taking care of his customers is paramount. We can’t wait to get this party started. In addition to the purse, we’ve got a whole handbag full of product awards from a variety of sponsors. On Friday night, we’ll also have a Racer Appreciation Party with food and a DJ playing music.

“The success we’ve had over the years has to be credited to the great staff we have in addition to the Beaver Springs staff,” added Burruss. “Without them, all of this wouldn’t be possible.”

This year will also mark Mutt & Jeff’s Fall Brawl at Mason Dixon Dragway in Maryland on October 8-10. Pre-entries for that event will open this Saturday, June 19 online at www.muttandjeffpromotions.com, or can be done this weekend at Beaver Springs Dragway. The format for that event will follow the same $10K-$20K-$10K.