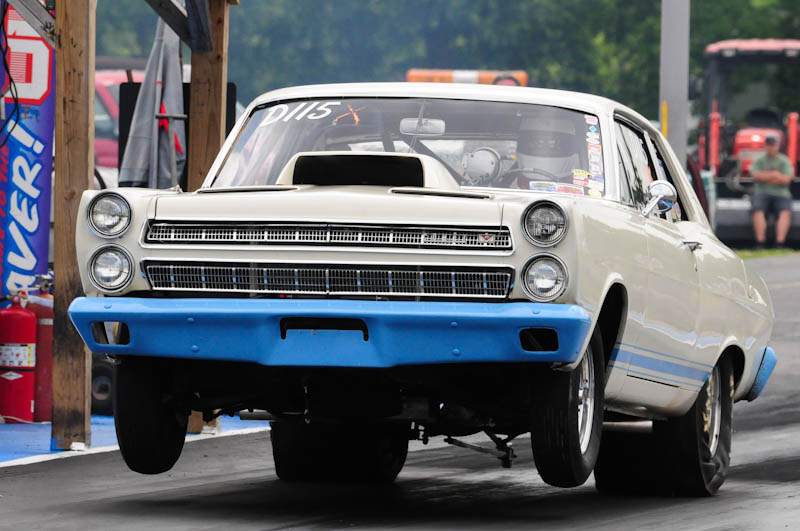 Nothing And Overall, The Sport Itself Is Healthy

When the sport of bracket racing came into existence some almost 60 years ago, it was done so as a stop-gap measure to temporarily turn the tide of money as the overwhelming reason for wins and losses. Here now was a class where driving ability far out-weighed “the one with the most money wins.”

So what is wrong with it? Very little actually!

If there is anything wrong, it may just be the expense of everything today. “No matter where you go, the price of everything is going up; restaurants, stores, gas, etc.,” says Jared Pennington, the promoter of the World Footbrake Challenge and noted racer himself. “There’s just no way around it and it affects everything we do. Although, I truly believe the sport itself is very healthy despite that.”

Much like the sport in general, bracket racing appears to be in a good spot today. One only has to look at the big dollar events being held all over the country and the car counts are up at almost all of them. This is not to say there are no problems, but most are minor if that. It may be the fact that 2020 was a year of uncertainty and racers just want to race. This year they’re able to. But whatever the reason, it’s all good.

It’s not known for sure just who woke up one morning and astonishingly came up with the idea to put a dial-in on a car and allow any type of vehicle to race any other, but there’s little doubt a number of savvy race track promoters saw it coming and jumped on the proverbial band wagon.

Steve Gibbs, former Director of Competition for the NHRA said several years ago, “I believe the first time I saw bracket racing, it was at Carlsbad Dragstrip in southern California in the early to mid-‘60s. I managed Irwindale Raceway from ’65 to ’68 and we had already started to transition into running brackets on a normal basis.”

Back in those days what was typically run on a weekly basis was your assortment of “class-type cars;” Stock, Modified and so on, including even fuel dragsters. However, racers in those classes were beginning to transition to running just the bigger events and as such, attendance on the local level waned. That same scenario may be happening with racers flocking to the higher paying bracket races, leaving their home track for the bigger payday.

Although, as Royce Miller of Maryland International Raceway points out, ““We’re actually seeing our largest car counts for our weekly bracket races. I think a lot of it might be because of nearby tracks which are closing or running different type events, but our weekly program is highly successful.”

Today, there isn’t a drag strip in the country that doesn’t run their weekly events in some type of bracket format. In fact, some newer racers might think that’s all there’s ever been. But things were a lot different “back then.”

“In 1974, we tried running a $1,000-to-win race in September and we were packed,” Leek added back then. “We did it again in October, and I remember snow even flying, yet I think we had something like 500 cars show up for that race. That’s when we decided to offer a $5,000-to-win bracket racing event on Labor Day in 1975, the U.S. Bracket Nationals. We had entries from 40 states and had to shut it off at 650 cars at that first race.” High-dollar bracket racing was born and has flourished still today.

“I’m not so sure there is much ‘wrong’ about bracket racing itself, any more than any other class,” says Tucson Dragway’s Jim Hughes. “I do however, believe there is a simple lack of understanding bracket racing amongst the aftermarket industry itself. While those classes are very participant-driven, I think it would help to educate those as to just how hard and competitive that type of racing is.”

Hughes has been involved with a number of no prep-style of races which have enabled racers and fans alike to flock to the track. Something which harkens back to the days of “my car is faster than yours.”

“It may just be the evolution of the industry,” says Scott Hall of Moroso Performance, “but there are less people working in our industry who actually race a car, as opposed to years ago where a company’s employment roster was made up with a variety of individuals who raced.

“Bracket racing is hard enough to understand for those of us who do race,” adds Hall, “that for a neophyte, it may seem overwhelming. In addition, racing has become expensive which makes it even harder for a person to afford.”

It’s ironic to think of how expensive bracket racing has become as the whole concept of it was based on the ability to competitively race even the lowest budget car against any high dollar piece. Remember that this is a class where the driver is the key element rather than the car.

For a while, it was thought a dragster was the right tool for the job. The thought of racing a door car against a dragster was akin to taking a knife to a gun fight. That scenario has been changing to where door cars are making a comeback at some of the big dollar races. We’re starting to see door cars hanging around in the late rounds of eliminations, some of which are cars not powered by the myriad of electronics used in today’s racers.

Unfortunately, that just may be the evolution of life itself. As things become more expensive, there appears to be less disposable income with which to enjoy the finer things of life.

All this being said, drag racing is alive and well and there’s not much which will change that.