Smith owns four venues that host a total of six NHRA Full Throttle Drag Racing Series events each season. One will be the June 15-17 Ford NHRA Thunder Valley Nationals at Tennessee's Bristol Dragway, and another will be the Sept. 14-16 O'Reilly Auto Parts Nationals at zMAX Dragway, across the road from Charlotte Motor Speedway.

His Las Vegas facility, The Strip at Las Vegas Motor Speedway, has completed one race but has one remaining, in October. The NHRA will visit his Infineon Raceway at Sonoma, Calif., in July as part of the Western Swing.

So announcer / drag-racing analyst Alan Rinehart got to the heart of the matter in his appearance Tuesday with host Joe Castello on WFO Radio's "Radio Nitro!" program.

"Hopefully people will see, hear -- feel -- what a Top Fuel car is all about and decide they want to come back, whether they come back to Charlotte in the fall or Bristol next month or wherever they end up," Rinehart said. "Anytime we can expose ourselves to a big group of people who are already racing fans, I'll take it. Two thumbs up to Bruton and his staff and the all the guys there at Charlotte.

"NASCAR fans are car people, whether they're aware of drag racing, what it is or how amazing it is in person," he said. "Watching it on TV -- ESPN, the job they do is amazing -- but you can't feel it. You can't experience it. You can't imagine from watching TV. Come out one time and watch it in person. If it's not for you, then it’s not for you, fine. At least give us a chance."

Smith is offering that chance -- in the hope that he can entice them to come to one of HIS racetracks. Even if this crowd lures fans to NHRA races at Chicago, Norwalk, or Reading or even to NHRA-owned tracks at Gainesville and Atlanta next season, at least he is promoting. First he is promoting his own interests, and that is not a character flaw. But if NHRA benefits, then Smith can be happy, for as Rinehart implied, once a fan is hooked, he or she only wants more of the experience.

"Bruton is such a supporter of NHRA drag racing," Rinehart said.

While that's true, he isn't crowding anybody else from the platform. So why didn't the NHRA reach out to the marketing specialists at the Indianapolis Motor Speedway -- or vice versa?

The NHRA owns Lucas Oil Raceway at Indianapolis, about a 10-minute drive down Crawfordsville Road from the world-famous Brickyard. Did the NHRA devise a way to preach its message to the largest single-day motorsports crowd in the world? After all, if just the racing-crazed Hoosiers who never have witnessed drag racing decided to check out the Mac Tools U.S. Nationals during Labor Day weekend became straight-line supporters, that would be a huge boost to the NHRA's "most-prestigious"-touted event. 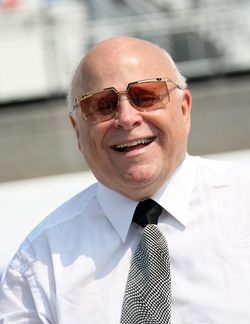 John Force Racing was creative last year, not only taking its Road Show to the circus that cavorts around 16th Street and Georgetown Road on the eve of the 500, but also participating in the open-house effort that a handful of drag-racing teams collectively have hosted for the past few years.  Is it the teams' responsibility to do that?

No fewer than 21 professional drag racers --representing 32 NHRA series championships among the current drivers alone -- operate out of the suburban Indianapolis enclave in Brownsburg. Surely, the NHRA could find a way to capitalize on that to promote its upcoming race. If it's stumped about how to do that, maybe it could receive some tips from Bruton Smith.

Making a splash in Indianapolis should be a no-brainer. It's the only place in the entire world that citizens love living as close to a racetrack as possible so they can brag, "You can hear the race-car noise at my house, just like you were there at the track! It's so cool!"

As for Sunday's spectacle at Charlotte, it just might even outdo John Force's legendary long, smoky Funny Car burnouts.

"The fun part about it is you're not trying to do a launch. You're just there to do a burnout,   a little exhibition. So that's pretty cool. Going into a situation like that where you don't have to worry about 'What if we overheat the motor? What if we overheat the clutch? We're never going to be able to make a good run,'  I think that stretches the parameters a little bit about just how much of a burnout you're allowed to do," Rinehart said.

"Obviously, there used to be guys back in the -- especially back in the Funny Car showman days -- who used to do burnouts half-track or 800 feet and just thrill the crowd. Well, somebody trying to do that now would get shot by their crew chief, just because of the way the cars are set up and the way they run," he said.

"But if you're not planning to make a run and all you're trying to do is show off and make sure that everybody can hear and feel these things," he said, "then it might be fun to watch them do a double-long burnout."

Rinehart and Castello fantasized about a dragster doing more than a simple burnout. A simple review of Competition Plus' article about Gary Beck published last summer serves as a reminder that he did it, not once but twice.

Beck drove his Export A-sponsored dragster around Mosport International Raceway near Toronto and again at Delaware Speedway, a banked oval short track near London, Ontario. Those were publicity stunts for his sponsor. And here's how Beck described the experience:

"When we were sponsored by Export A, the Canadian cigarette company -- that was 1974-75 -- we did a lot of promotions across Canada. One was at Mosport, outside of Toronto, when NASCAR was there. We did an exhibition lap. The dragster is so fast, and the groove is so good. Every time you'd stand on the throttle, it would hike the front end up," he said. "You'd go and you'd slow it down . . . turn and go, turn and go. I made a lap all the way around Mosport, which is a [2.459-mile] track.

"They timed me, but I didn't know they were timing me. And I stopped in front of the grandstands and waved to the people, made another run down the back straightaway, I pulled the parachutes about three-quarters of the way around and dragged them around to put on a show. My time was only a few tenths off what the NASCAR [cars] were running that day. But the dragster's so fast. If I had any idea it was that close, I would have run a time faster than NASCAR," Beck said. "I didn't realize it was going to be that close. So that was fun.'

At London, the ride was bit more harrowing.

"We were going to do a fire burnout and go around and do a lap. It was at night," Beck said. "We start the car. We do this fire burnout in front of the grandstands. They turned the lights out in Turn 1! I can't see nothin'! I give it a little throttle so that the header flames come back up so I can see around the corner. I get around Turn 2 and they turn the lights back on. I stand on the throttle and it picks the front end up and wheew -- down [the track] we go!"

NHRA fans for more than a decade have heard how much the U.S. Army sponsorship means to Tony Schumacher. The Army also sponsors NASCAR driver Ryan Newman, and Newman's team owner and driving teammate at Stewart-Haas Racing, Tony Stewart, echoed the sentiment Schumacher has shared since 2000.

"With our relationship with the U.S. Army, we get to meet so many soldiers and Marines across the country. To be that much closer and that much closer to what is going on, you really realize what Memorial Day really means," Stewart said.

Added Stewart, "It's a shame that more of the people in our country can't do a better job of getting behind our service men and women and realizing what they sacrifice so we can go do the fun things we get to do and the freedoms that we get to have.

"When you hear everybody complaining all the time about this and about that, they have no idea what these soldiers are going through just to give us that opportunity to do it so people can sit behind computer screens and talk trash about other people and never have to face up to it.  . . . It's amazing that people have no clue what our troops really do and what freedoms they allow us to have with what they do," Stewart said. "It kind of makes you disappointed in your country, but I'm really proud of our service men and women that give us the opportunity to get to do what we do."