COMMENTARY: PRO STOCK - THERE WERE TOO MANY VOLUNTEERS, AND NO VICTIMS

Replace it with Pro Modified!

Replace it with Factory Stock!

Those are just a few of the comments I have read over the last three years.

Man, it's been a fall from grace for Pro Stock. It's as if no one cares about racing where the timing equipment determines winners by the ten-thousandths, or if a driver leaves the starting line with an .02 reaction time they are deemed asleep at the wheel.

There used to be a time when drag racing was all about the racing; the entertainment for the gearhead was in the racing.

Not today. In the age of instant gratification and calamity videos at the swipe of a cellphone screen, it’s all about the entertainment value.

Apparently, there's an overwhelming belief that NHRA Pro Stock has none.

In today's age, there are so many options for the entertainment dollar that for one to be successful, it must have the old media mandate, "if it bleeds, it leads."

The only thing Pro Stock has been bleeding lately is teams.

By my last official count, Pro Stock has lost as many as seven teams with four of those being full-time.

Those who have walked away came to the realization that the investment has far outweighed the return for decades. Some are still racing, just not in Pro Stock - the so-called pinnacle for full-bodied drag racing.

Some believe Pro Stock's competitiveness might have been the biggest nail in the soon-to-be-built coffin. Time will tell if the reduction in schedule size will stimulate growth or just prolong the inevitable.

If this is true, haven't we seen this movie before?

I think it was titled, Pro Stock Truck: the class of competitiveness and hefty team counts.

Pro Stock Trucks rarely got crossed up, rarely blew up anything and rarely had anything but side-by-side races. It became apparent within the first few years the class needed something else.

The cries went out for larger engines and nitrous oxide to speed them up. “Do something” the critics said. It was their belief that side-by-side racing was too boring to stomach.

"The best thing you could do for Pro Stock Truck is to put the Pro Stock Motorcycles in the bed, and run them off a cliff," one critic exclaimed in the midst of the cries to kill the class.

And just like that, competitive drag racing was put on notice that it was living on borrowed time, at least in the professional ranks.

Nevermind the fact the Pro Stock Trucks still had 35 cars show up for the U.S. Nationals even after it was announced the class would not be part of the program in 2002. At the same event, Pro Stock had 45 entries.

In the end, the NHRA, in a combination of acquiescing to the peanut gallery and sporting a good measure of arrogance, pulled the rug out from underneath this group of racers who only did what they were supposed to do, race and do what it takes to win.

Some allege the television time they took away from the larger funded fuel teams was an even larger transgression.

The way the NHRA handled the situation landed them in court fighting a lawsuit which alleged the sanctioning body led the Pro Stock Truck racers to believe they'd be racing in 2002.

Sixteen years later, Pro Stock is tiptoeing through the same kind of minefield for its survival.

Unlike Pro Stock Truck, Pro Stock has given the decision-makers all the clout they need to kick it to the curb.

There's enough blame to go around in this fiasco of the factory hot rods.

Here are just a few of the greatest hits as I see it. 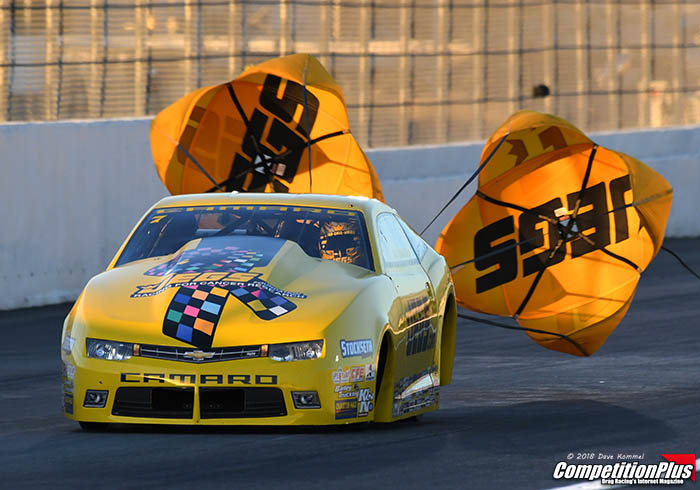 One or two crewmen were replaced with four or five specialists.

Racers began spending exorbitant amounts of money on specialty items such as shocks. It was all in the name of competition and taking the class to the next level.

Racers, back in the prosperous days, allowed the investment to return ratio get so out of whack that the lack of prize money wasn't an immediate problem. After all, there were big-time sponsorships with big-time research & development budgets. These racers were paid to win and spent accordingly with no regard for life down the road.

To hell with the future when, unfortunately, sponsorship money would become nearly impossible to find.  The independent racer was sacrificed in the name of taking the class to the next level of racing.

Guess who also is guilty as hell? The sanctioning body.

NHRA did little to squelch the arms race. They made a few token gestures like banning exotic metals, but it was “too little, too late.”

NHRA also did little to adjust to the changing times.

The sanctioning body had the opportunity to embrace electronic fuel injection long before they mandated it on all Mello Yello Drag Racing Series Pro Stockers for the 2015 season.

Did you know that at least two high profile Pro Stock teams went as far as developing electronic fuel injection for use in the class? The earliest was Warren Johnson in 1989, and later in 1992 with Reher & Morrison.

The issue reportedly was that at least one manufacturer didn't want it, forcing NHRA [long before the Glen Cromwell administration] to shelve the idea. They didn't want to bite the hand that fed them.

It was not the first time NHRA's management stared down the barrel of modern technology, and it scared them to death. Case in point, Buddy Ingersoll's turbocharged, V-6 effort in 1986.

Then in 2000, NHRA allowed the first of the composite bodies to come into the class, effectively erasing the original steel/roof-and-quarters linchpin for Pro Stock.

It wasn't long after this the cars lost their identity.

They lost their identity to the point the class even welcomed in a four-door car, but by this time the die was already cast. Instead of the Challenger, Pro Stock got the Dart.

Then the manufacturers, whom the NHRA allowed to be integral in the decision-making process, pulled their support from the class and left it. What you have now is the result of years of the tail wagging the dog. I could point to numerous examples, but at this point, what good would it do?

Then there was the timing of the implementation of the electronic fuel injection.  I have to agree with former Pro Stock champion Allen Johnson that it was a lot of money spent to accomplish so little.

Instead of making the conversation back in the days when money was free-flowing, NHRA ordered the change during an era of financial famine.

I don't blame the NHRA for attempting to do something to stimulate growth in the class, but in the end, it's been too little, too late.

I've always questioned why, when Pro Stock is filled with successful businessmen and drag racing is indeed a business and not a hobby, in what business model does it make sense for one to invest let's say on the extreme lower end, $30,000 to race for $10,000?"

If you keep racing with that kind of deficit, it doesn’t make you a victim, it makes you a volunteer.

Fix that aspect, despite all the other mistakes made, and you fix Pro Stock.