The biggest rumor circulating this season concerned a possible end to NHRA’s nationwide fuel ban for the next one. Member tracks nationwide had been forbidden since 1958 from allowing anything other than pump gas to combust in legal classes and eliminator categories. Booked-in match racing between nitro-burners was grumpily tolerated by dictatorial president Wally Parks as a necessary evil for NHRA operators forced to compete for fans with the fuel-happy American Hot Rod Association and "outlaw" strips—particularly in Wally’s backyard, where, ironically, the ban had been launched in March 1957 by some of the same independent operators now promoting open Top Fuel shows (e.g., Lions manager Mickey Thompson, who in 1961 effectively broke this camel’s back by flipping from NHRA to AHRA affiliation).

Howard’s forward-thinking aluminum bullet, expandable to 500-plus cubic inches, combined a cast block with billet Hemi heads of his own design. Initial testing at Lions with injectors and nitro proved so promising that NHRA freaked out and banned the prototype (which remains in the possession of the Johansen family), effectively postponing the acceptance of aftermarket aluminum engines for nearly a decade.

Art Arfons, Romeo Palamides, and Walt Arfons had respectively introduced jet dragsters that became the sport's biggest attractions and money-makers, outshining the traditional Kings Of The Sport and commanding Top Fuel-ish appearance guarantees of $1000-plus. These earliest examples also tended to run out of shutdown area, however. Soon after ’62 March Meet Top Fuel runner-up Glen Leasher fatally rolled Romeo's LSR car at Bonneville, NHRA outlawed all aircraft-powered vehicles, whether thrust- or wheel-driven. (This ban endured until the mid-1970s, but “weenie roasters” never went out of style at non-NHRA venues.)

Last but not least, two major performance barriers officially fell near season's end at San Gabriel, California: Tommy Ivo clocked 7.99 in a fueler (backed up in 8.10 seconds, within the then-customary two percent), while Doug Cook went 9.96 in the legal gasser of Fred Stone and Tim Woods (10.04 backup). Both marks would be bettered and battered soon enough, as documented in the 1963 clippings that we'll be sharing in the next episode of “Drag Rags.” 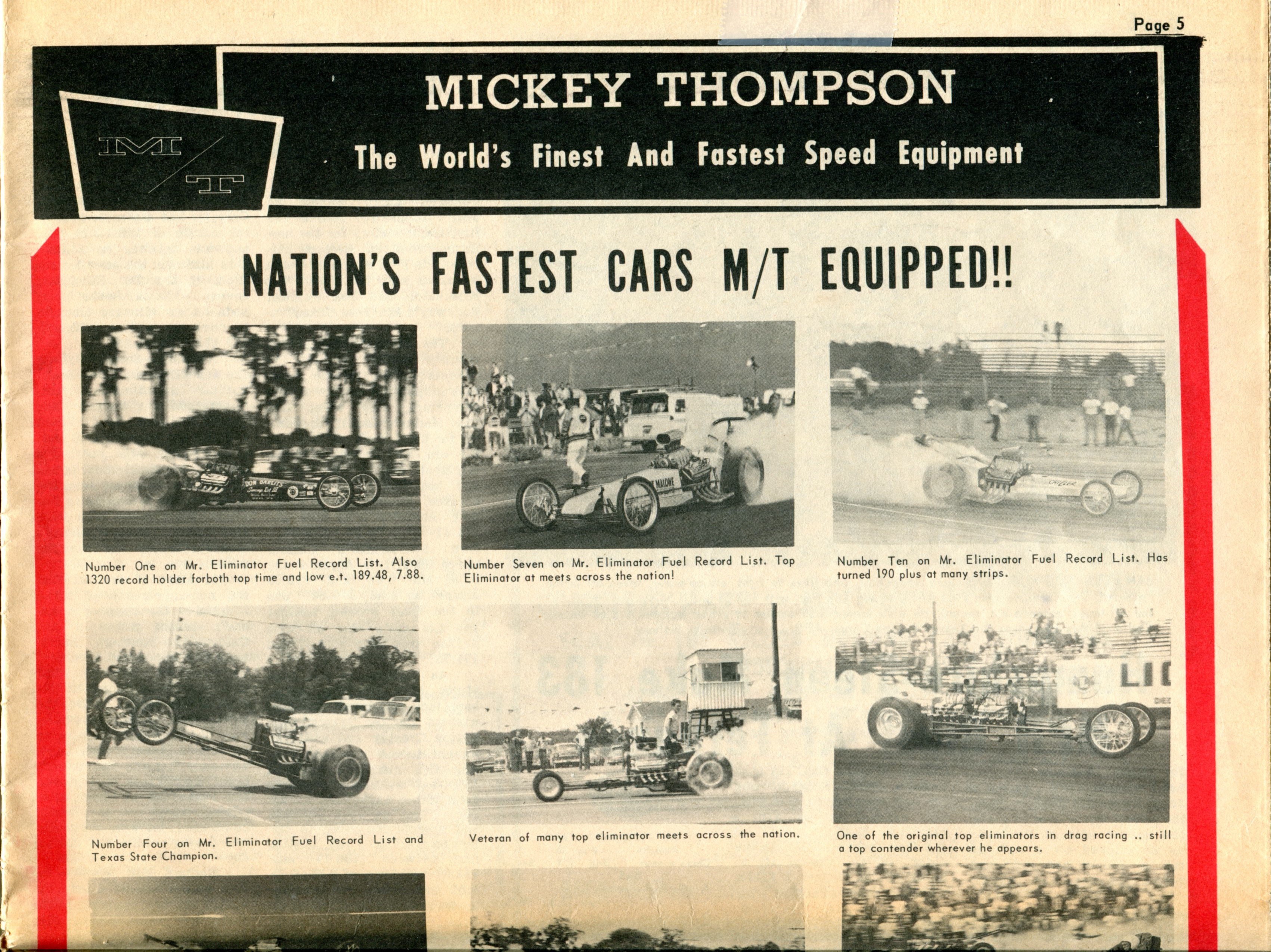