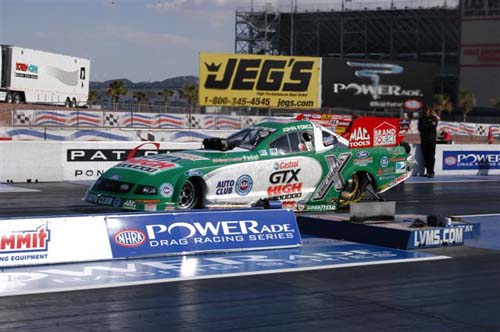 After finally generating tire shake on the last of three test runs Wednesday in his Castrol GTX High Mileage Ford Mustang, 14-time NHRA Funny Car Champion John Force declared his race team ready to compete in this week’s eighth annual SummitRacing.com Nationals.
Force made runs of 200, 300 and 400 feet primarily to check roll cage clearances of newly-installed padding and determine the drive-ability of the Mustang after changes made by chassis builder Murf McKinney. The cockpits of the three John Force Racing Funny Cars and both of the team’s Super Comp dragsters were reconfigured to address safety issues raised by the death of Eric Medlen in a testing accident last month at Gainesville (Fla.) Raceway.  The team did not participate in the most recent event in the NHRA POWERade Series.
“The first run, I had a little blurred vision so we went back and made some adjustments to the padding in the cockpit area,” Force said.  “On the second run, one of the very first times in my career, my vision wasn’t blurred when I left the line.  That was really impressive to me. “On the last run, I made a little longer burnout, about three-quarter track, and I whipped the wheel back and forth, not just once, but three or four times, to get some side-to-side motion and, bottom line, I felt like a baby in a crib,” said the 122-time tour winner.  “It didn’t even try to blur my vision so I’m approving these changes for my drivers, my daughters Ashley, Brittany and Courtney and my son-in-law, Robert Hight. It felt really good out there.
“I want to say that what we did in the driver cockpit area might not be right for everyone, but I’m giving all the clearance data to the NHRA and to Kenny Bernstein to share with the PRO membership.” Force, who was using a seven-point lap belt and a hybrid restraint system, was especially appreciative of the efforts of Trevor Ashline at Safety Solutions, Kris VanGilder of ISP and of the staff at McKinney Corporation, which went above and beyond to make cockpit changes to six race cars in just two-and-a-half weeks.
The 14-time Auto Racing All-America selection was particularly impressed with the new R3 hybrid restraint system which was designed to keep the head from moving side to side as well as front-to-back.  It apparently was side-to-side oscillation that caused Medlen’s fatal head injuries.
“I want to thank the NHRA, Graham Light and Dan Olson especially, for working with us through this tough time and understanding what we’re trying to accomplish,” Force said.  “We’re not through, but I feel that what we’ve done the last three weeks will at least allow us to get back in the game and attempt to race again. It’s a good start.”