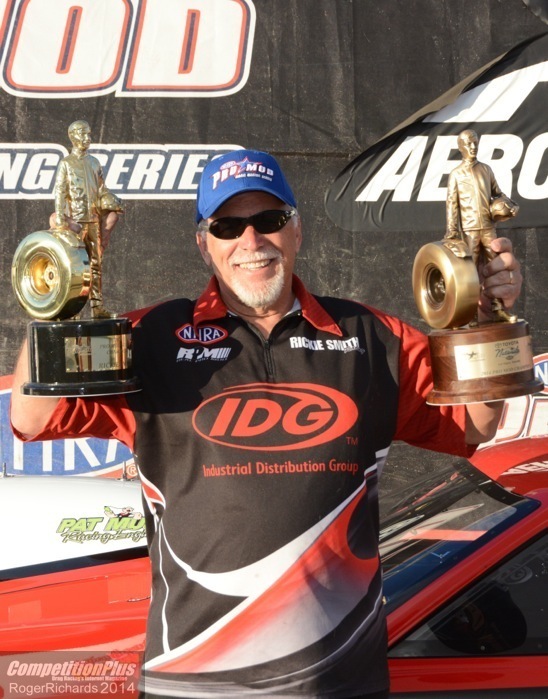 Smith decided to come back for another season in 2014, and the decision paid dividends.

Smith decided to come back for another season in 2014, and the decision paid dividends.

“I had all intentions of retiring,” Smith said. “IDG (Industrial Distribution Group) talked me into staying and I know they have talked about next year (2015), but I will not commit. I have not said anything to them, I just wanted to get through this year. I’m not going to say one way or the other right now, but I will say one thing, we won the first Pro Mod race NHRA ever had and it would be a heck of a time for me to walk away because I won my last race and the championship at the same time. It would just be perfect to go. I don’t know whether I am or not.”

Smith’s victory was his third of the season and seventh of his NHRA Pro Mod career. Smith made history in the process, becoming the first NHRA driver to win back-to-back Pro Mod world championships.

“The only problem is I don’t want to stay out here until I’m not competitive or not winning,” Smith said. “We see some racers stay too long and I’m 61 (years old) pretty soon, and yes, I’m competitive and I feel I can drive these cars probably as good as anybody. I handle it in bad situations. Like I told my crew chief, it isn’t all about cutting lights. You’ve got to know where you want to stage up there. You got to know when it shakes, when to pedal. That’s where I have won these two championships, being able to drive the car when the car isn’t acting right.”

Smith also believes he still has the hunger to drive.

“I don’t know that I have lost my edge, I don’t know that anybody can say that,” Smith said. “I got beat on some holeshots this year, but that’s what we are bitching about with the tech department. They want parity and parity is good, but you can ask any Sportsman racer or anybody out here when you leave it on your thumb with an automatic versus your foot with a clutch, you are two or three hundredths better with that thumb. Electricity is faster than that clutch, and that’s what we are trying to tell them. Every time I’ve got beat this year on a holeshot it has been against somebody with a button. I’m within a hundredth up there with anybody with a clutch, but I can’t leave with those guys with a button and I don’t know anybody else can hardly either.” 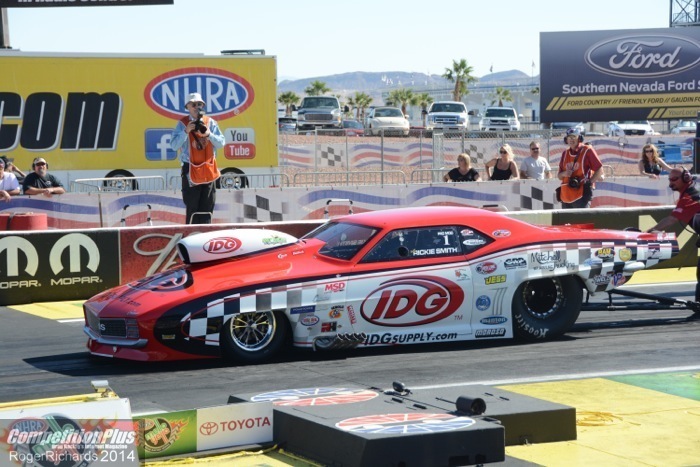 At Vegas, Smith, who resides in King, N.C., clinched another world crown when he defeated Richard Snavely in the second round. Smith added two more wins over points runner-up Troy Coughlin and Don Walsh to grab the victory.

“I just think the world of IDG and NHRA for letting us race in front of these fans,” Smith said. “This is the only ballpark in drag racing, we all know that. You can have all these other sanctioning bodies you want to and the racers need it, but NHRA is the big house and there’s no better place to win than right here.”

“Come Thursday (Oct. 30) I was about a basket case,” Smith said. “I wanted to win this thing. It’s hard to win one round out here with a nitrous car. My car has just been awesome out here and for a nitrous car it has been unreal. It was a lot of stress on me all week. I will never stay out here (Las Vegas) for two weeks again and be this miserable going into the race.”

Smith also wasn’t making any excuses or was upset because he didn’t clinch his latest championship before the season’s final race.

“I was a little disgusted, but I’m not kicking my butt because I didn’t do anything stupid,” Smith said. “I got beat on some holeshots by Von (Smith), and when you go back and look I was within a hundredth or quick as anybody with a clutch. I just got beat. It was meant to be. The Lord meant to bring us down here (Las Vegas) and put a little stress on me and let me enjoy this thing this way. Usually this stuff is meant to be one way or the other and that’s the kind of way I try to race and not try and beat myself up there.”

Smith also took a moment to reflect on his historic season.

“It has been a heck of a year,” Smith said. “I have bitched and moaned and carried on with some of these guys, but I think that is good for the class. You have to have a little camaraderie and you have to have some arguments going on. If you don’t get something going on, it is kind of dead. You take (Bob) Glidden, and Warren (Johnson) and Ronnie Sox and me and we all had that rivalry years ago. It didn’t mean we were going to fight and be mad, but we staged battles and would get out and cuss each other out, but it was good for the sport. Right now the Pro Stock guys just want to come up and here and race like Super Gas guys. They want to do their burnout, stage up and go. Fans don’t get into that. They better start doing something or that class is not looking real happy right now.”