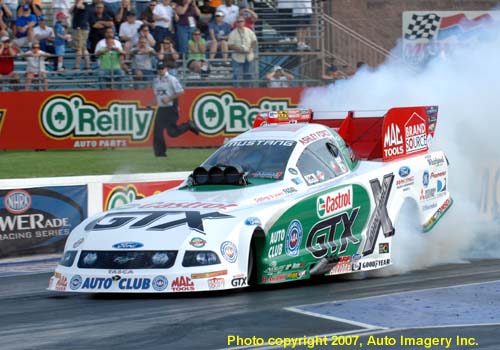 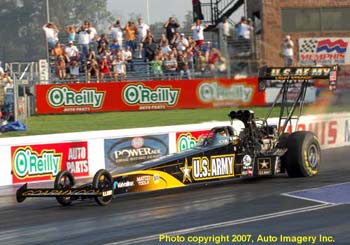 At a track known for it’s domination by John Force, it’s was his daughter, rookie sensation Ashley Force, who was is in prime position to add a No.1 qualifier to her fathers stellar seven No.1 qualifiers, five win career at Memphis Motorsports Park at the 20th annual O'Reilly Mid-South NHRA Nationals with a steady 4.810 at 316.38 mph.

Force's run completed a sweep of the top three qualifying positions by John Force Racing Funny Cars. It's been a banner week for the 24-year-old daughter of drag racing legend John Force as she was voted the "Hottest Athlete" in the country by AOL readers, which prompted a guest appearance on The Tonight Show with Jay Leno Monday evening. Now she's set to complete the best qualifying session of her rookie campaign. 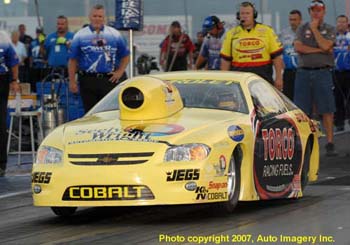 "The most exciting thing of today is getting down the track both times," said Force, who opened with a 4.905 in her Castrol GTX Ford Mustang. "When you get down the track it allows the guys to push it harder in the next run because you know you're in and you can afford to try things. To have all three of our cars at the top really has everyone pumped up and excited, especially dad [John Force] and his crew because they've been really down after not qualifying in Indy.

"Being No. 1 is really cool but I would trade it for a win in a second. I keep having people come up and congratulate me on winning the AOL deal. That was a neat contest but the win I want is on the racetrack. I told the guys we have to win one so the AOL thing isn't our only win of the year."

Ashley's teammates Robert Hight and John Force, her famous father, follow in second and third place, respectively, making it a sweep for John Force Racing. Hight is just one thousandth of a second back with a 4.811 in his Auto Club of Southern California Ford, while Force posted a 4.821 in his Castrol GTX High Mileage Mustang. 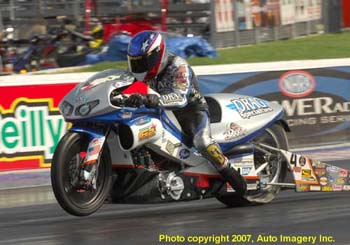 Top Fuel leader Schumacher used the last pairing of the day to grab the No. 1 position away from early frontrunner Brandon Bernstein. Schumacher's 4.565 at 325.45 mph in the U.S. Army dragster was just enough to put him out front once again. Should the time hold it will mark Schumacher's ninth pole of the season. Bernstein's hot rod wound up fourth with a best of 4.573 at 327.35 mph.


"It won't hold up if it's in the 70s tomorrow like they're saying," Schumacher said. "But if the track can hold more we should be able to get more. We were soft just now in the middle so we have room to improve. I'm sure there are other teams saying the same thing."

Winner of the last two national events, Pro Stock top qualifier Connolly remains the hottest driver in the class after a track record 6.673 at 205.26 mph in his Torco Chevrolet Cobalt.

"Indy was a big race for us and a big win, especially with the Countdown to Four starting and there only being four races until the next cutoff," Connolly said. "So to come in here and pick it up where we were leaving Indy is exciting."

Pro Stock Motorcycle leader Ellis knocked half a tenth off the former MMP elapsed time record with his 6.997 at 187.44 mph on his Drag Specialties S&S Buell V-Twin. And he did it without the help of crew chief George Smith, who was grounded in route from Wisconsin when his airplane flew through a flock of birds.

"It's been a crazy day but I like how it ended," Ellis said. "George called and we talked about what to do and he said, 'Handle it.' So that's what we did. I tuned the thing and George Bryce came over and did the clutch and it all worked out."