ENCORE - IACONIO NO LONGER WONDERING "WHAT IF" 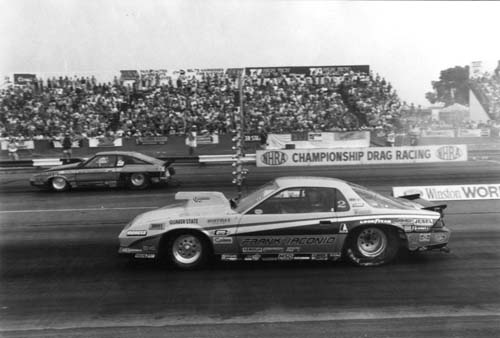 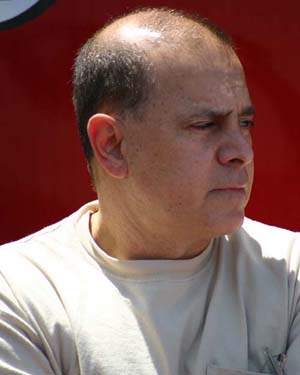 He was one of Pro Stock’s superstars in the late 1970s and early ‘80s, winning 11 NHRA national events and having his name mentioned in the same breath as Bob Glidden, Reher-Morrison-Shepherd and the other icons of the class for a few of those years.

Yet today, Frank Iaconio might best be remembered for something he didn’t win – the 1983 NHRA World Championship.

The controversial finish to that year overshadows the breadth of Iaconio’s career, in which he was a major player for about a decade despite a serious crash, a major NHRA Pro Stock rules change, a misguided effort to be part of a “superteam” and the legendarily fanatical efforts of his competition, who, like Iaconio, ran professionally without oodles of prize or sponsorship money.

“You’re kinda caught up in the whole thing,” Iaconio said about his dogged efforts against the teams of Glidden, R-M-S, Bill “Grumpy” Jenkins and Warren Johnson. “The thought crossed our minds that we were doing this without a lot of money. The only thing we got were parts; we just survived on what we won and selling a motor now and then. We just kept having fun, just worked that much harder.”

Iaconio didn’t dominate Pro Stock the way Glidden did through the 1970s or R-M-S shoe Lee Shepherd did from 1980 until his untimely death in early 1985. But he was always in the mix, winning national events here and there and consistently finishing in the top four of the season-long points chase, taking the runner-up spot in 1979, 1982 … and 1983.

Right up to the last race of the season, 1983 seemed like Iaconio’s year to break the Glidden/R-M-S stranglehold on Pro Stock. He had won three national events and runner-upped in four more; the last win came in the penultimate race at Fremont, Calif., where a 7.69-7.68 holeshot win over Shepherd gave Iaconio a 50-point lead and a bunch of momentum heading to the World Finals at Orange County International Raceway.

The impending duel never happened, though, because of an incident still discussed today. After qualifying in the No. 1 spot with a 7.65 time, Iaconio matched up in the opening round against Reid Whisnant and his Dodge Daytona.

Instead of the race being the expected walkover, Whisnant left well ahead of Iaconio, beat him to the stripe and received the win light and an official time slip of 7.62 seconds, which was not only the quickest NHRA Pro Stock time ever but about two-tenths quicker than he’d ever run. That meant Shepherd only had to win his second-round race to take a third straight championship, which he did.

Ask Iaconio about the ’83 World Finals today, and you can hear a little anger, occasionally the word “screwed,” in his Jersey-accented baritone.

“Yeah, it was definitely a malfunction,” Iaconio said from his shop in Flanders, N.J. “The next round, Reid was back to normal (running a 7.82). The same thing happened to Kenny Dondero against Reid the next year at Gainesville (for the Gatornationals).”

It was suspected that something on Whisnant’s car hung low enough to delay activating the green light on the tree, allowing him a headstart without tripping a redlight, but tech inspectors couldn’t find a problem. Iaconio said NHRA never officially acknowledged the problem then or has apologized to this day.

“We talked in the trailer for while, but they decided we wouldn’t rerun it,” Iaconio said. “Reid believed it – he didn’t want to rerun, he believed he ran that time. (NHRA official) Steve Gibbs knew I kinda got the shaft; he said something to me.”

Iaconio never would get so close to the NHRA points title again. But he said he doesn’t lie awake nights thinking what-ifs.

“Nah – the championship would have been nice, but - whatever …” he said. “You can’t live in the past like that.”

Iaconio started his dragging career from his auto repair shop in the mid-1960s with a Stock Eliminator ’57 Chevy, which he ran through 1970. He said his biggest win in the car came at the 1969 Super Stock Magazine Nationals at York, Pa. Besides the honors, Iaconio said he won a brand-new Mercury Cougar and, with prizes and contingency money, ended up taking in about $10,000 with his $2,000 Chevy.

“It was a three-day race. The most points after three days won,” he said. “I won Sunday’s eliminations, might have been runner-up Saturday. ‘Grumpy’ won Super Stock, so there I was with him in the winner’s circle.” 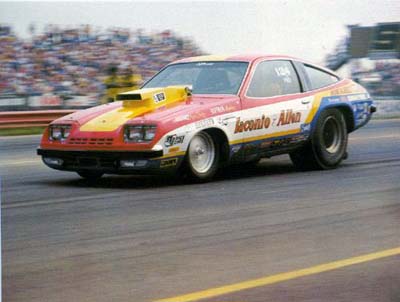 After about a year driving someone else’s Plymouth in Stock, Iaconio made the move to Pro Stock in ’72, running an SRD-built small-block Vega ala Jenkins, who was re-writing the book on how to win Pro Stock with his light, tube-framed, SRD Vega.

That lasted until the 1974 season when Iaconio suffered two accidents, the last in testing that injured him badly and caused him to leave the sport.

But not for long. Iaconio was friends with Ray Allen, the Pro Stock upset winner at the 1972 U.S. Nationals. Allen had sold his racer and “wasn’t doing anything,” Iaconio said, when the two joined forces and started putting together a Pro Stock Chevy Monza in ’75.

“I had my repair shop, and (Ray) was the zone rep for Chevy,” Iaconio said. “I’d work on the car all day; Ray would come by after work. Another guy with us was Jerry Spinner at Truppi-Kling (a New Jersey engine/performance shop).”

The new car was ready to debut at Englishtown, N.J., for the ’76 Summernationals – except a driver was needed.

“Ray was supposed to drive,” Iaconio said, “but he didn’t have his license (renewed). I had my license, so I wound up driving. I wasn’t gonna drive, because of the accidents, but it was either I drove or we weren’t gonna run.”

Run they did. After qualifying at the Summernationals, the team went to Indy for the ’76 U.S. Nationals. There, Iaconio laid down a string of 8.70s and 8.80s – at a time when 9 seconds got a Pro Stock into shows and 8.60s were the realm of the top dogs – and made it to the finals, where he lost to Wally Booth’s AMC.

“Yeah, that was a surprise,” Iaconio said of the Indy result. “But both Ray and I had pretty good racing backgrounds. Everything just clicked.”

The Iaconio and Allen Monza kept going the next year, with three more runner-up finishes and a fourth place in points in the team’s first full season. About that time, Iaconio said he closed up his repair shop and went racing full-time, building the occasional customer engine as well. 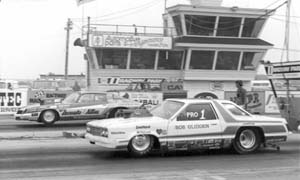 The debut win everyone knew was coming finally came at in the 1978 Gatornationals – a bit lucky, perhaps, because Glidden fouled away what would have been a Low E.T. 8.54 in the final. Facing the 1978 Glidden juggernaut (seven wins in nine races), Iaconio ended the season third in points.

Nineteen seventy-nine brought Iaconio a new Camaro built by Don Ness, second place in points to Glidden and two NHRA wins, both over Glidden – the Summernationals on another redlight and the Fallnationals on a 8.49-8.47 holeshot in the quickest Pro Stock race ever at the time. 1980 saw no such luck, as Glidden and Shepherd won every race between them, although Iaconio managed another third in points.

Iaconio still ran the ’79 Ness Camaro in 1981, but there was one noticeable change – Ray Allen’s name was gone from the sides of the car, as he went to drive Jenkins’ “Grumpy’s Toy.” Iaconio returned to the winner’s circle, taking two nationals and – yep - third place in points behind Shepherd and Glidden.

“We just needed a change,” Iaconio said about losing Allen.

More change came in 1982, as NHRA gave up on its body style and cubic inch-based weight breaks for Pro Stock and mandated 500 cubic inches for everybody’s engine, as the IHRA had run since 1977. Allen returned to help his old partner for

the 1982 campaign, and it paid dividends when Iaconio won the first race under the new rules, the Winternationals, over Shepherd. Later, he added the U.S. Nationals to his resume and placed second to Shepherd in the points, as he, Shepherd and Glidden ran within hundredths of each other all year.

“Everybody thought all these IHRA guys would come over and just kill us (with their 500-inch experience),” Iaconio said, “but it was the same guys in front. It’s the people, you know.”

That led to the already-discussed 1983 season. After a lackluster 1984 (seventh in points), Iaconio came to a career fork in the road, abandoning the General Motors products he’d run almost his entire career to run a Ford Thunderbird for a new “superteam” formed by Funny Car star Kenny Bernstein with Budweiser and Motorcraft support.

“I actually had an offer from Oldsmobile at the time,” Iaconio said. “The financials were pretty similar. I just was intrigued by trying to run a Ford, so I went with Bernstein – which was a mistake.” 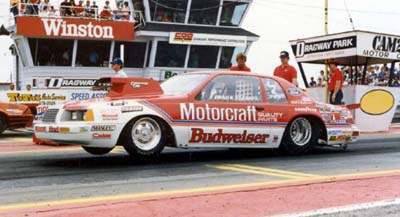 Iaconio said in two years under the Bernstein umbrella, he had plenty of money and parts but never could get the Ford running well. He took just one national event, the ’86 Winternationals, before Bernstein pulled the plug on Pro Stock when Buick replaced Ford as a major sponsor (which also led to Bernstein running a Buick on NASCAR’s Winston Cup Series and, eventually, a Buick-powered CART effort).

Iaconio tried running a Ford on his own in 1987 but returned to the GM fold the next year, getting a Pontiac Firebird from Jerry Haas.

“The Ford, trying to do it myself was a money pit,” Iaconio said. “It was just harder (to get working right). With the Firebird, I was back in the hunt in no time.”

He ran the Firebird through 1989, the last year with Super Shops backing as a teammate to Kenny Koretsky, then an Olds Cutlass with a little help from the manufacturer. Iaconio picked up a few more runner-ups, the last in 1993 at Sears Point, Calif.

“Then Olds pulled out in ’95, so that was pretty much the end,” Iaconio said. Since then, he worked a little with Barry Grant’s Pro Stock team and built Pro Stock motors under the acronym FIRE – Frank Iaconio Racing Engines – at his Flanders shop. For a half-decade, his powerplants were exclusively run by Mike Edwards, a 13-time winner in the class.

Oh, and if anyone has a spare car for the engine builder who was one of the top three or four drivers in his class, but had his best shot at a championship ripped away from him.

“I’d still like to be racing,” Iaconio said. ”But without $2 million, you’re not going to do it. I just kinda miss the whole experience.”