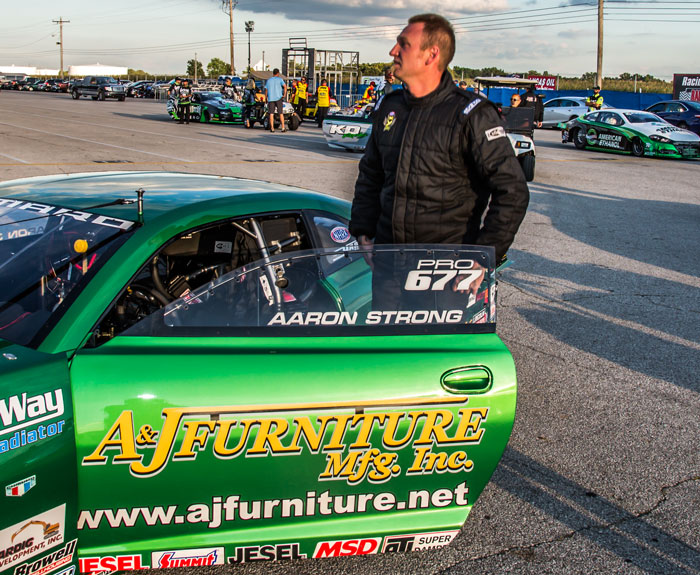 Strong, who won the 2016 Seattle event, which was completed at the U.S. Nationals and beat Vincent Nobile in the finals, was back in the seat at the end of the 2020 season following an out-of-the blue text from Pro Stock team owner Richard Freeman.

“Richard sent me a text that said, ‘Is your Pro Stock license current?’ I texted back ‘yes.’ Then, I sent him back a text that said ‘Why?’,” Strong said. “He said Friday (Oct. 30) at noon that (Bob) Benza’s not going to race and if I could get down there, I could race the car. I woke up Friday morning not knowing I was going to race the car and my wife and kids got on a plane and I was going down the track Saturday. I hadn’t been down a dragstrip since the World Finals in 2016 at Pomona, (Calif.).”

Strong qualified for the season-ending event at The Strip at Las Vegas Motor Speedway in the No. 16 spot and lost in the first round to Greg Anderson, Nov. 1.

“We ran faster in round one, but it wasn’t enough to beat Greg,” Strong said.

Strong will make his return to Pro Stock racing at NHRA’s Denso Spark Plugs Four-Wide Nationals in Las Vegas, April 16-18. He will be driving the same Camaro he had prepared by Freeman’s Elite Motorsports team at the final race of 2020.

“When I ran Pro Stock before Richard’s team would do my motors for me,” Strong said. “I bought a motorhome and a trailer from them in 2016. I owned two of his motors. I’m really excited to race again. I decided about a month ago I was going to race this race (upcoming in Las Vegas) instead of 24 hours before the race. I have never raced the Four-Wide, so I’m really looking forward to that.”

The Camaro Strong will be in at the upcoming Vegas race is the one Benza drove at the season-opening Gatornationals in Gainesville, Fla. Strong, meanwhile, doesn’t have any definite plans for the 2021 season.

“I’m really not sure,” Strong said. “They were so good to me to let me drive the car last year at the Vegas race. I can’t afford to run full-time, but if I could some sponsorship help and get out there and run a little bit it will help. I’ve raced a lot of times in Vegas in Comp. I like the track. I want to qualify higher this time and I think the car is a car that can qualifying in the No. 8 to No. 10 spot. You only have to get through two rounds and you’re in the final. I’m pretty good at cutting lights and I’m hoping I can go a couple of rounds. That would be cool. That’s my expectations. The team they have and the power they have I’m ready to get another Wally.”