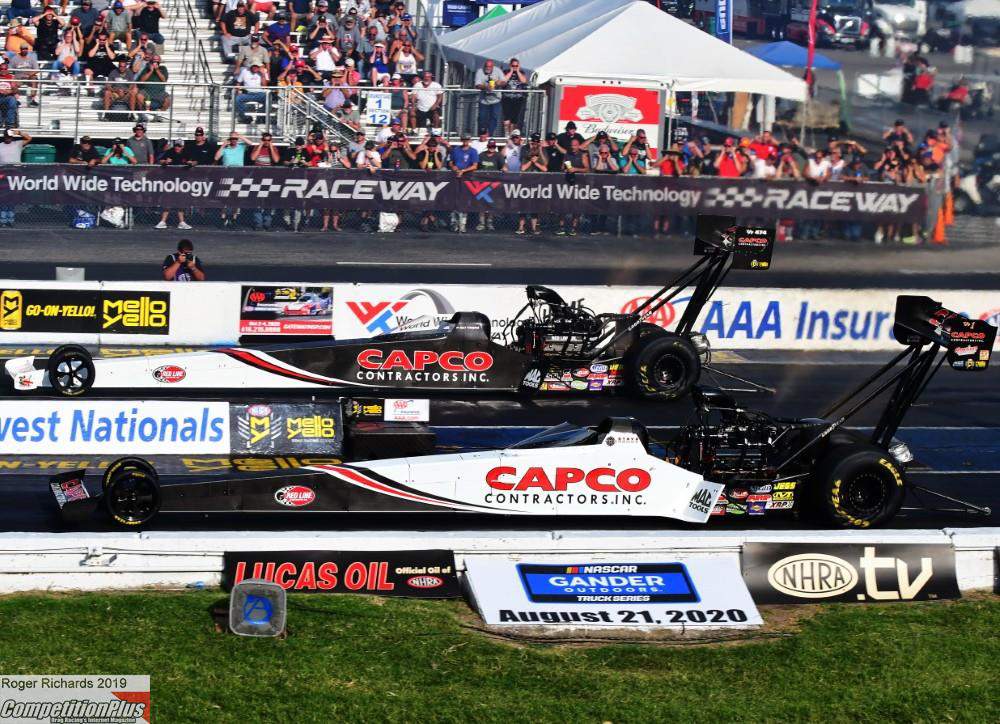 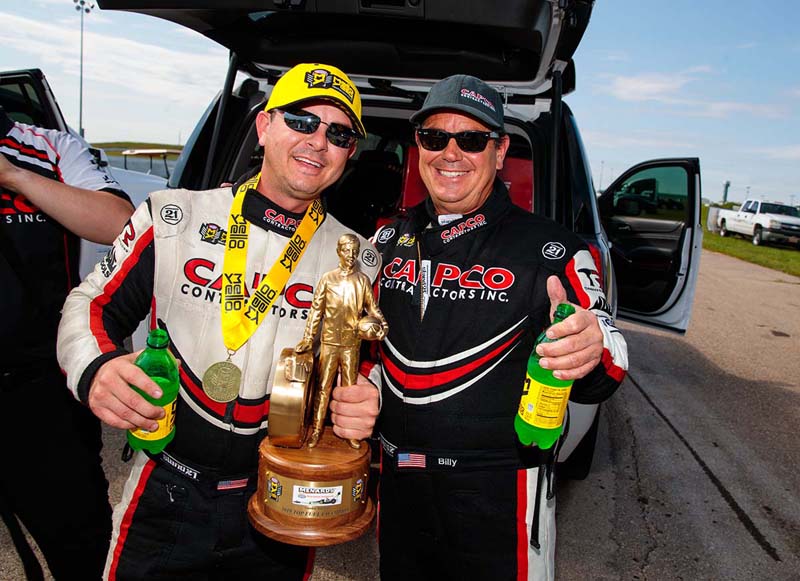 It’s an interesting dynamic, but the father and son Top Fuel team are considered one of the more potent one-two punches in the fast-paced world of NHRA Mello Yello Drag Racing.

Steve is the defending series champion, having made a clean sweep of the 2018 Countdown to the Championship. Billy is the most recent winner on tour, raking in the victory at the NHRA Midwest Nationals, outside of St. Louis, and beating Steve all in one fell swoop.

The Torrences aren’t in the business of laying down for one another, as Billy puts it when the visor comes down, it’s all business.  And for Steve, the road the two generations have traveled in drag racing creates an interesting dynamic.

“I’ve experienced all different emotions through the deal,” Steve said. “The first time I ever put him in the Top Fuel car and tied him in, I got to thinking,” this is a terrible idea. I’m putting somebody that I really love in this dang Top Fuel car, and this ain’t safe.”

Of course, Steve understands Top Fuel drag racing is as safe as it’s ever been, and he knows by experience. It’s been almost two years since he crashed in Dallas, Texas while racing at 300 miles per hour and walked away without a scratch.

“I mean, it’s just different when you’re putting your family member in it,” Steve admitted. “It kind of put me in the parental tole, I guess. But it’s been very fun; it’s been very special to be able to do that. I’m not going to say that I’m the best teacher, but you tell my dad what to do, and he just goes and does it. To see the success that he’s had and to see how well he’s actually driven the car, I mean he has far less laps out there in a Top Fuel car than probably 90% of the people there, maybe more and he’s won the second most amount of races this season. So he’s doing something, and he’s doing it pretty good.”

If pretty good means winning three races in five finals, in only his second season, then Billy is indeed pretty good.

“He has driven a lot of different race cars, really fast door cars, really fast super Top Dragster. 6.30, 6.40 cars over 200,” Steve explained. “So you know what to expect. You know how to drive; it’s just when you get enough fuel car, you can take half of everything you learned and throw it out the window and keep the fundamentals because these things are a beast.” 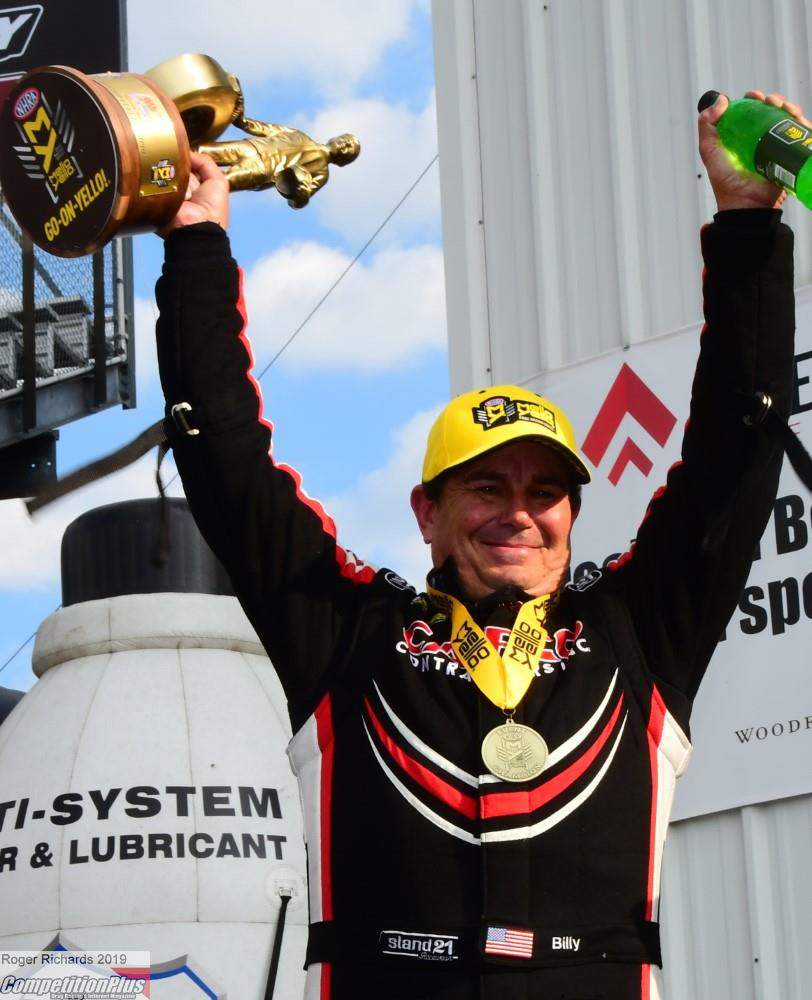 Steve smiles and admits his dad has probably been a better student of the game than he was all those years back.

“Heck, I was 15 years old, and I felt like I was about 10 feet tall and bulletproof and knew everything,” Steve regretfully admits. “So yeah, he’s probably a much better student than I was.”

Billy’s lessons have resonated with his son all these years later, to the tune of two NHRA championships, one in the pro-am, last year’s Top Fuel title as well as 35 national event victories. Beyond that, he’s still teaching Steve the ropes of the pipe-fitting industry.

“The thing that he’s taught me that I hold on today the most is work ethic, and it’s not just only in racing, it’s in everything,” Steve explained. “I think that it’s been a huge part of the success that we’ve had with the race team is just sheer work ethic. Everybody out there has the funding; the big teams have the funding; they have the parts, the pieces, the people. But sometimes you just got to work harder than the next guy to get where you want to be, and that’s what not only myself but every one of those guys on our two teams have strived to do.

“I think that when you have that support, and you have that mentality, when you have it, and somebody else sees it, it carries over to the next person. Dealing with people, my dad’s literally had thousands of employees over the 25 years at Capco and years before that where he was boss, and you get to read people, and you get to know what elevates them, and I’ve seen that firsthand and it works. So every one of those guys on the Capco team, that’s something that he’s just shared with each and every one of us.”

Steve is the outspoken one, often criticizing NHRA’s decision to create a playoff system, and Billy, well, he’s just the one who sits back and smiles.

“Oh, yeah. I’m the loudmouth, trash-talker and he’s just humble as can be, having a good time, great guy, and that’s a double-edged sword because I’m pretty much the spitting image of him, but I think that some of it is just because our personalities are very similar,” Steve said with a smile. “Sometimes, he’ s just a little more close to the vest, and I am.”

And as Steve puts it, father knows best, but sometimes he can learn a lesson or two from the kid.