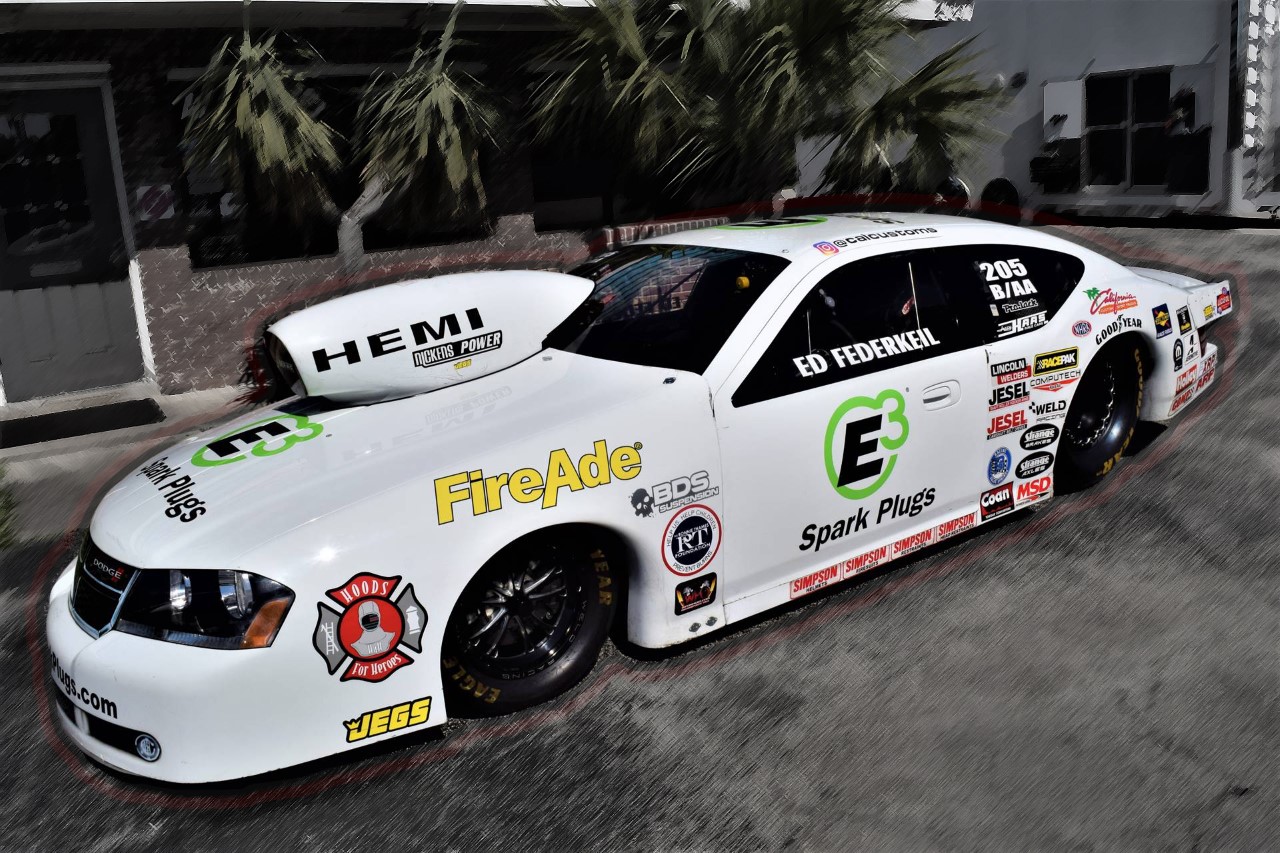 Competition Eliminator racer Ed Federkeil will be competing at the prestigious Chevrolet Performance Parts NHRA U.S. Nationals Labor Day weekend in Indianapolis to raise awareness and interest for the Hoods for Heroes organization and The Ronnie Thames Foundation.  Federkeil will be teaming up with sponsors E3 Spark Plugs and FireAde to run his Nickens Powered Dodge Avenger in one of the most competitive and diverse classes contested on the NHRA Lucas Oil Drag Racing Series. The former firefighter is using his racing career and sponsor relationships to shine a light on two very important charities.

Federkeil, a 33-year professional firefighter, knows the risks firefighters take every day to save lives.

“One of the risks we are now seeing are the effects of the protective hoods that firefighters wear absorbing all sorts of carcinogens and now firefighters are succumbing to cancer years later.  I recently lost a coworker and friend to this very disease. I am getting my sponsors together to team up to promote Hoods for Heroes to get as many firefighters as possible new particulate hoods which are made of barrier materials which shield firefighters from toxic particles.”

Federkeil’s race car will display the E3 Spark Plugs logo for the U.S. Nationals and remainder of the 2019 NHRA season which will join season-long sponsor FireAde as a backer for the racer from Florida. Hoods for Heroes and The Ronnie Thames Foundation will also be prominently displayed on Federkeil’s race car.

“Ed is a true racer’s racer who personifies the E3 customer. He looks for every performance advantage he can get to win races and E3 is all about delivering those advantages so it makes sense for us to partner with him,” said Rob Fisher, E3 vice-president of motorsports. “What Ed is doing with the Hoods for Heroes campaign and The Ronnie Thames Foundation is wonderful and, for us, the icing on the cake. We’re excited to support the effort.”

Federkeil understands the importance of business to business networking as it relates to racing. He is using his firefighting relationships to not only help grow FireAde but to also bring companies like E3 Spark Plugs into the fire service market.

“It’s important to work with companies like FireAde that makes products for both consumers and professional firefighters that are non-toxic and eco-friendly and E3 Spark Plugs whose patented DiamondFIRE plugs deliver better power and more reliable performance in any motor which is especially critical for the gas powered tools that firefighters use on a daily basis,” explained Federkeil. “Both of these companies manufacture products that protect consumers and our environment.

The Ronnie Thames Foundation is dedicated to promoting fire safety and works to prevent pediatric burns as well as supports the Shriner’s Hospitals burn centers. The Ronnie Thames Foundation is committed to being an agent of assistance to firefighters and community organizations by providing educational programs focused on the prevention of fires through safety awareness. Helping children and their families become knowledgeable about the importance of fire safety practices and burn prevention not only keeps our children safe but helps to protect and grow our communities.

The Ronnie Thames Foundation was started by FireAde founder and CEO Ron Thames and his wife Teresa to honor Ron’s son Ronnie who was tragically killed in a motorcycle accident in 2004. Other benefactors include the Shriner Pediatric Burn Hospitals located in Cincinnati, Ohio and Galveston, Texas.

“We are excited to be teamed up with Ed and his team,” said Joey Cudmore, FireAde vice-president of motorsports. “He has done a great job opening doors for FireAde and helping us promote our product. His 33 years as a firefighter is a huge asset for our brand promotion and you can’t put a price on that. We are looking forward to heading into the biggest race of the year in Indy. ”

Hoods for Heroes is working tirelessly to extinguish firefighter cancer. Standard firefighter hoods are commonly referred to as “cancer sponges” because they are made of a material, which when wet can absorb toxins through direct contact with a firefighter’s head and neck. This allows dangerous particles to easily enter the bloodstream through the thinnest skin on a firefighter’s body and puts them at greater risk of developing cancer. Particulate hoods, however, are made of barrier materials, including both new particle filter layers as well as conventional moisture barriers, which shield firefighters from toxic particles. Hoods for Heroes is committed to providing all firefighters with the protective hoods that can help reduce head and neck exposure to carcinogens by 99%.

“Our goal is to continue to serve and assist as many Florida area firefighters as we can. We are also looking at ways to grow this program with grants and donations to serve firefighters nationally. Partnering with Ed and his race team is one of our first national engagements and we are thrilled to be a part of his marketing and promotion team,” added Jeff Rountree, Hoods for Heroes, co-founder and CEO.

This season Federkeil has competed in six national and divisional races as part of the NHRA Lucas Oil Drag Racing Series. His Hemi Powered Dodge Avenger tuned by Mopar legends David Nickens and Mike Sullivan started this season qualifying number 1 at the Winternationals in Pomona and not lower than No. 6 all season long which regularly features two dozen competitors vying for the coveted NHRA Wally. The Competition Eliminator class is made up of nearly 100 individual classes featuring dragsters, roadsters and full-bodied cars, and they run almost every engine combination imaginable.  Federkeil is excited to add E3 to his sponsor roster for the final races of 2019.