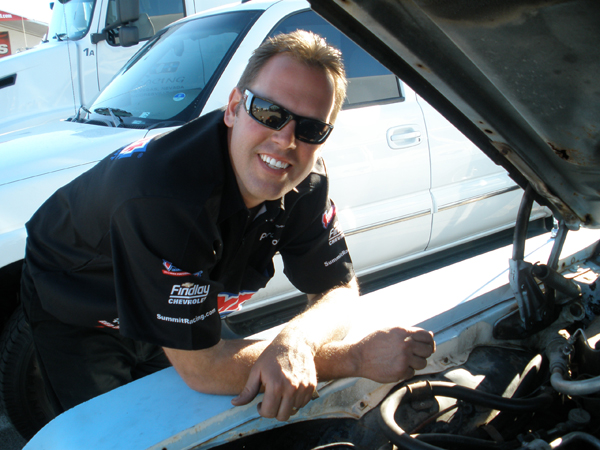 Jason Line’s announcement Wednesday that the 2020 season will be his final campaign as a Pro Stock driver came as quite a surprise to everyone in drag racing.

The 50-year-old racer only broke the news to his team owner, Ken Black, “literally a couple of days ago.”

The 2020 season will mark the end of a most-dynamic pairing in Pro Stock. Teammate Greg Anderson is a four-time NHRA champion with 90-plus victories.

CompetitionPlus caught up with Line at the KB Racing shop in Mooresville, N.C., on Wednesday afternoon.

COMPETITION PLUS: Obviously, this wasn’t a spur-of-the-moment decision. How long have you been thinking about hanging it up? 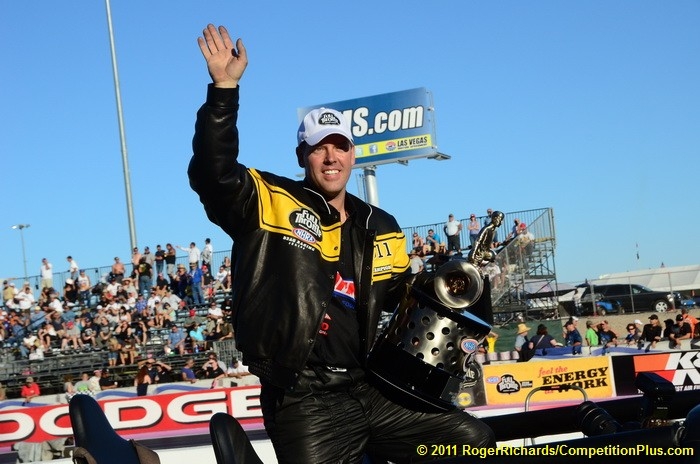 CP: Was the grind of the schedule after all these years a factor in your decision?

JL: No, I don’t think so. You get used to that, and it becomes a way of life. There are parts of that I’ve enjoyed, but there are parts of every job that you don’t enjoy. It’s a little bit, but that’s not the main reason, that’s for sure.

CP: How did you break the word to Ken or Greg? Who’d you tell?

JL: We’ve got a unique way of communicating over here -- or a lack of it, actually (laughs) -- I just told Ken the other day; literally a couple of days ago, and that was a hard thing to talk to him about. He’s obviously been unbelievable to me and my family. He’s one of the few people in my life that has truly changed my life, so I’m indebted to the man forever.

It’s a hard thing to do and talk about. It’s going to be a big adjustment. You get used to doing something for many years. It’s going to take some adjusting, there’s no question. But I am looking forward to it. 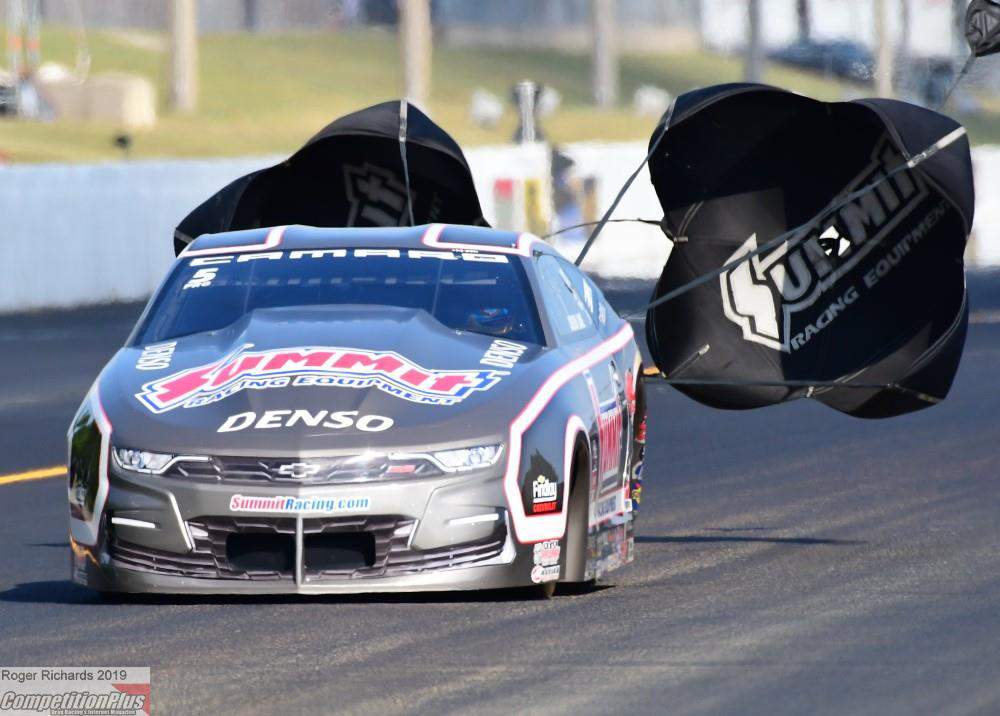 CP: As I understood it in the team’s press release, you’re going to stay on at KB after this season to work with the engines. Is that accurate?

JL: As long as they don’t fire me, you bet. I love these guys and I love working here. The truth is, I feel like I can be serving the team better here at the shop and trying to work on the engine side of things a little bit. You can only split your time so many ways before some thing and some body gets shortchanged. I feel like I haven’t always done that part of the job justice; so, anyway, it’s just time. My kids are getting older (ages 11 and almost 14), and I want to be an influence on them at this point in their lives and it’s hard to do if you’re not there.

CP: How did you wind up in North Carolina with a NASCAR team from Minnesota before you joined KB?

JL: The short version is I got hired by Joe Gibbs to be a dyno operator over there, and I worked with the Cup team over there for five years (including Bobby Labonte’s 2000 championship). …

I was a drag racer first. I won the NHRA Stock championship (in 1993) when I was really a young kid at 22 or 23. I did that for awhile, and I eventually bought a dyno and tried to dyno engines and to learn about stuff. And because I had this particular type of dyno and Gibbs had bought the same kind, they were looking for somebody that had experience running it and I was recommended to them.

CP: So the dyno manufacturer actually recommended you to them?

JL: They definitely did.

CP: What was that experience like, working with a NASCAR team?

JL: It was super cool. Working at Gibbs was a heck of an opportunity, and I’m still friends with a lot of guys over there. I was exposed to a whole ‘nother world that I didn’t even know existed.

CP: How’d you wind up getting back into drag racing?

JL: Eventually, Greg Anderson moved here to Charlotte, and he moved into a place in Concord. He was renting shop space from another fellow from Minnesota, and I used to hang out over there because I was from Minnesodta. It was Jerry Hemmingson from Jerico Transmissions.

I just kind of volunteered to help Greg because I loved Pro Stock and that’s what I always really wanted to do. You never really think it’s even an option, but him moving there was just plain good luck for me. I didn’t know Greg but I knew his father because I dabbled in some snowmobile racing as well and his dad did that. It was just a good natural fit.

CP: Was Greg aware that you had a drag racing background and had won an NHRA Stock championship?

JL: Greg’s pretty focused and I think he had maybe heard of Stock Eliminator, but didn’t have any interest and still doesn’t like my interest in it to this day, I don’t think.

One thing led to another and he offered me a job. I said I wouldn’t leave Gibbs unless it was for the chance to drive a Pro Stock car. To me, I was hoping that meant to get a chance to just drive it and maybe get my license. He said, ‘Well, we’re going to start a two-car team and you can drive the second car.’ It was as simple as that. Greg is not a man of many words, so it took a few days for that to sink in because I didn’t know if he was serious. But that’s what it came down to, so they took a heckuva gamble on me. 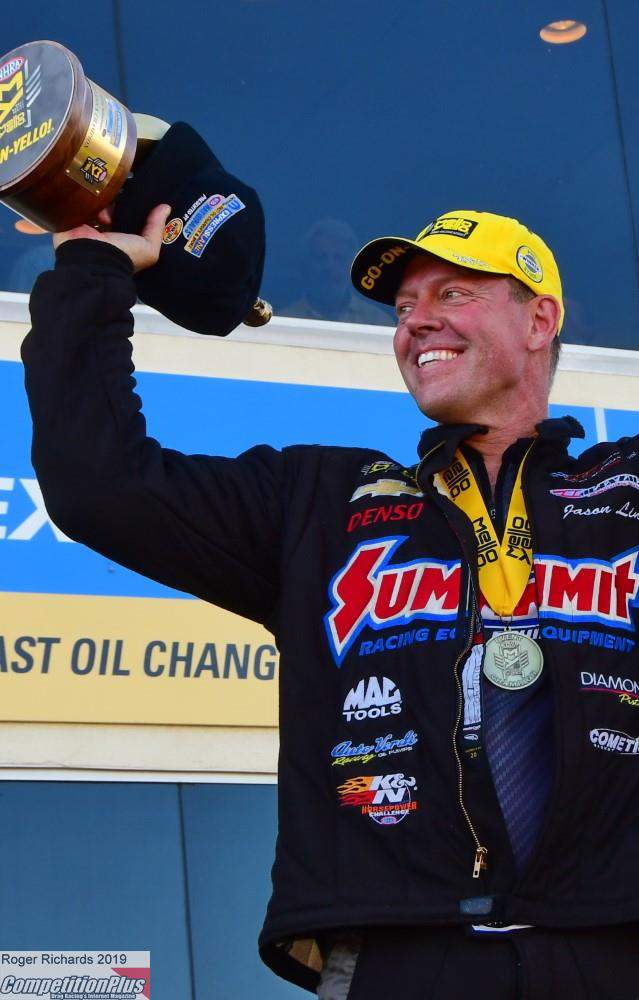 CP: So it was straight from Stock to the grind of Pro Stock ...

JL: Yeah, I skipped a coupla steps in there. My Stocker, it ran 10.60s at the time, I think. Trust me, the first time I let the clutch out (in the Pro Stocker), I pushed it in as fast as I could and I said, ‘Man, this thing’s crazy. I don’t know if I’m going to be able to do this.’ It takes some getting used to, like anything else. It proves one thing: It’s amazing what can become normal. My transition wasn’t exactly silky smooth, but nonetheless it worked out in the long run.

CP: You won four races in your first season, but that first race ...

JL: I did. but the very first event I entered (Columbus, 2003), I crashed and ruined a brand-new racecar.

CP: And they gave you a second chance?

CP: Now that you’ve made the decision to retire, have you thought about what you’ve accomplished in Pro Stock with three championships and 50 wins?

CP: So, ideally, you would win the championship this year and go out on top. How cool would that be for you?

JL: I like your thinking, sounds like a nice plan. We have as good a chance as anybody, that’s for sure, and great, great people. We certainly have a great chance. In all our years of doing this, I think we’ve had a top-five car all but one year. I don’t see any reason for that to change. The playoff format kind of throws a wrench into that, but it’s certainly a possibility.

We are back in the archives again, this time with an article published in January 2007. Would you believe Bob Glidden almost ended up in an Oldsmobile? The 1983 Hurst/Olds specifically. - #ClassicDragRacing #DragRacingNews - https://t.co/158COKNjMC pic.twitter.com/tTxR3cE8CT