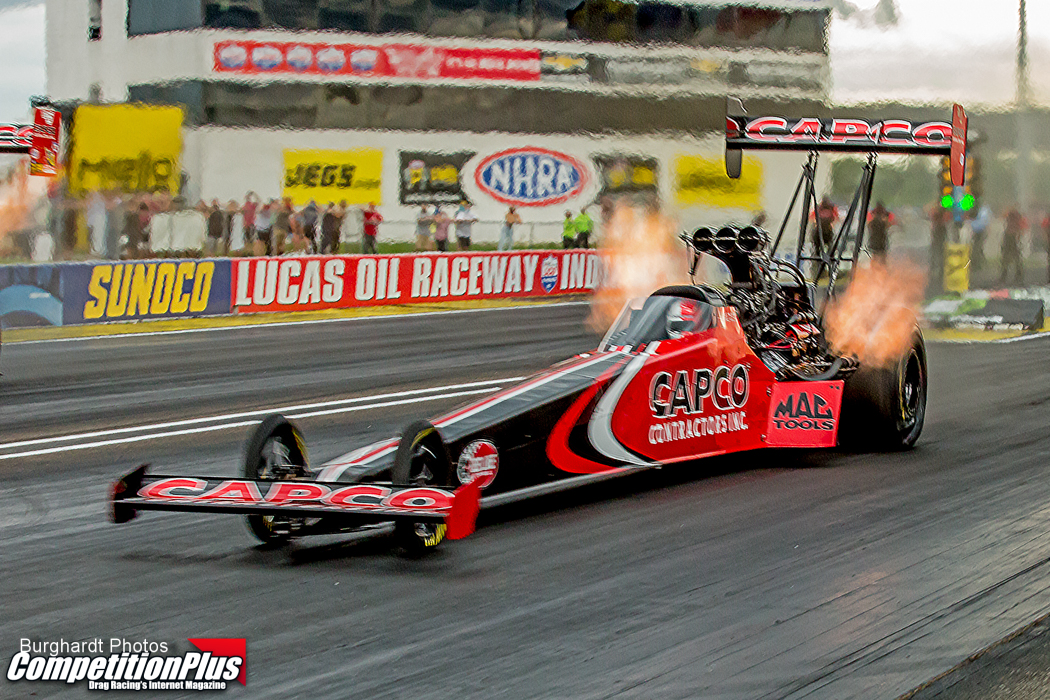 Heading into race week, few knew exactly what was happening at Torrence Racing.

On Saturday, the team made little doubt of their racing intentions moving forward.

Not even on the entry list as of Monday morning, defending class champion Steve Torrence blasted to the top spot Saturday in the second of two sessions at the E3 Spark Plugs NHRA Nationals at Lucas Oil Raceway to earn his 25th career No. 1 qualifier and first of the year.

“Those bad-to-the-bone Capco boys made it fly during Q2 and we’re headed into race day No. 1,” Torrence said. “Now the fun begins."

Torrence climbed four positions from Q1 in the deciding session to take the top spot in the Capco Contractors dragster with a 3.779-second pass at 321.19 mph. This is the first time Torrence has started No. 1 at Indy in Top Fuel.

Torrence just held off early season points leader Doug Kalitta, who qualified second with a 3.804 at 316.30 mph. Before the season hiatus, Kalitta opened the year with two final round visits and a win at the Winternationals.

“It was raining up until we started the car," Kalitta said. "Then we staged and I thought ‘we have got this’ because there was no rain on the windshield. It was a great run. The car stayed hooked up. I knew it was a good run and then no sooner than we got around the corner it started raining. Hats off the to Mac Tools Toyota guys because they made it happen. With the first round at 9 a.m., It will definitely be cooler and I’m sure my boys will have something for them.”

The top two qualifiers from Q1, Clay Millican and Tony Schumacher, were due up in the final pairing, but as they were backing up from their burnouts it began to rain and the NHRA called the session. Millican and Schumacher slipped to sixth and seventh respectively. Millican was itching for the opportunity.

"You have a huge adrenaline buildup completely focused and ready to go excited for the opportunity to go out there and retake number one spot and then get told to shut down," Millican said. "Nobody can help the rain but it is definitely disappointing to get shut off when you’re about to stop on that loud pedal."

Torrence, the other early-season race winner from Phoenix, will face Luigi Novelli in round one on Sunday.

“You can’t take anyone lightly,” Torrence said. “If we make a mistake, Luigi has proved he’s capable of just stepping up and slapping us. That said, I’m just glad to be back racing. I’ll be even better once we can get all of our fans back in the mix.”