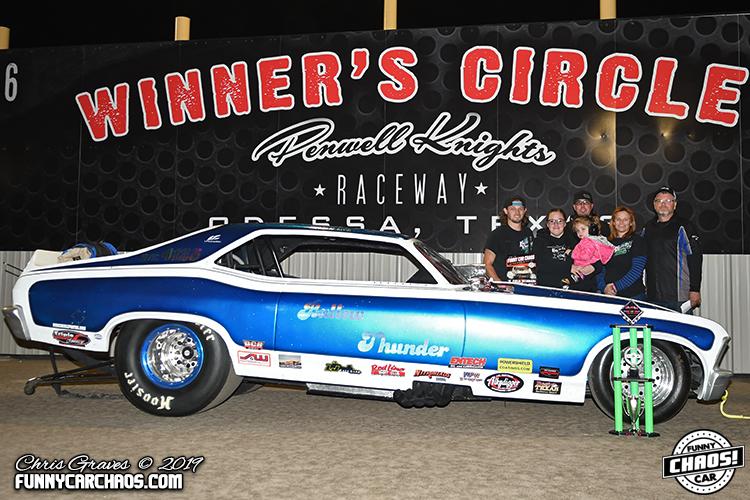 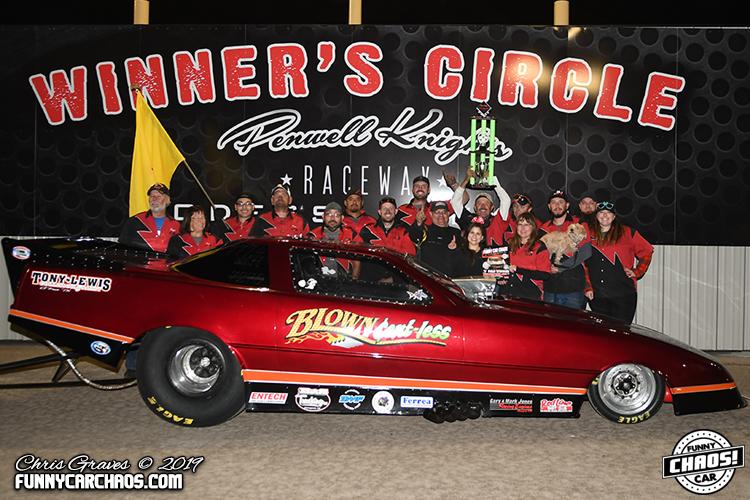 The 2019 Funny Car Chaos season officially concluded on November 1st & 2nd at Penwell Knights Raceway in Odessa, Texas with the "Oil Field Nationals" non-points, exhibition event. With the epic Best of Texas BBQ Sauce Championship battle concluded in September, the no pressure event satisfied the final Chaos fix for fourteen drivers who made the tow to West Texas and marked the return of nitro funny cars to the 53-year-old facility located just off I-20 West of Odessa. Track owner Gary Gardenhire had taken notice of the Funny Car Chaos series throughout the 2019 season and jumped at the opportunity to squeeze this event in before the end of the season. Joined by the Dirty South Gassers, heads up shootouts, brackets and junior dragster the event had something for everyone as the pits filled on Friday afternoon for a fabulous weekend of drag racing.

Literally none of the fourteen entered Chaos drivers had ever raced down Penwell Knights Raceway, making the learning curve equal for everyone as both drivers and their crew chiefs did their best to provide the best performance. Friday night's two qualifying sessions resulted in hot and cold results for many, certainly hot for one driver, your 2019 Funny Car Chaos Champion. Ken Singleton ripped off a jaw-dropping track record elapsed time of 3.82 at 188 mph in the "High Risk" screw blown Monte Carlo to lead the charts and raise the eyebrows of the Penwell Knights Raceway staff as their track record had already been beat!

Nick Poloson clicked off a 4.16 at 181 mph in the Doak family-owned “Bucket List” nitro burner to score the second qualifying position and Dustin Bradford posted a career-best 4.37 at 161 mph in the San Antonio based “American Dream” to claim the number three spot. Jeff Cameron’s 4.50 rounded out the top half of the Rodak’s Custom Coffee ‘A’ Field after two of three qualifying rounds. Singleton flexed his muscle yet again as he improved on the track record in the final qualifier with a 3.81 at a booming 200 mph, clearly the car to beat heading into eliminations.

Funny Car Chaos welcomed three new teams to the series as Bill Ort made his debut in the “Giddy Up & Go” Ford Mustang bodied alcohol burner from New Mexico. Ort was joined by fellow newcomer Shane “Smokey” Blanton” who debuted his “Bad Company” alcohol burning 1991 Chevy Lumina from Dumas, Texas. Finally, Gary Smith’s “Seismic Activity” entry was on hand but mechanical issues kept the car from taking the track, but we look forward to Smith’s 2020 ‘on-track’ debut with his flopper from Lubbock, Texas.

This week's @ARPBolts Question of the Week asks, "Who is your NHRA Rookie of the Year?" CLICK LINK BELOW TO CAST YOUR VOTE #DragRacingNews #nhra - https://t.co/jxGgyY7qFz pic.twitter.com/H5ir9cguhe 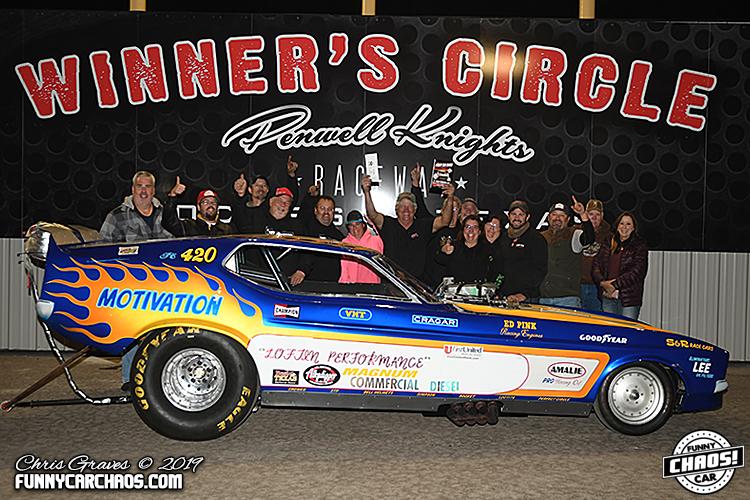 An overnight cold front brought a chilly Saturday morning to Penwell Knights Raceway, but consistent sunshine helped warm things up to a comfortable 63 degrees as the final qualifying session was on tap as teams battled for their final positions. Tod Barker’s “Back in Black” alcohol Hemi from Oklahoma clicked off a solid 4.33 at 162 mph to jump into the ‘A’ Field and was joined by Jordan Ballew, Bill Ort and Chuck Loftin who’s 4.87 at 150 mph rounded out the top eight. AlkyDigger ‘B’ Field action was led by Tera Graves who wheeled the Keith Jackson owned “High Heaven” to a best of 4.92 in qualifying. Nitro-a-plenty in the big power ‘B’ Field as Graves was joined by fellow CH3NO2 burners Dave Gallegos, Lyle Greenberg and Eric Eoff with the lone alcohol burner Shane Blanton joining the mix heading into eliminations.

Nick Poloson and Bill Ort kicked off eliminations as Poloson stepped up to a 4.07 at 183 mph to best Ort’s 4.62 at 150 mph. Chuck Loftin was out next alongside top qualifier Ken Singelton. Loftin has proved his ability to run in the 3.80 zone in his nitro burner but had struggled thus far to find their tune-up, while Singelton clearly had a handle on his track record-setting entry. At the flash of amber, Singelton blasted off the line first with Loftin charging hard with the front wheels in the air. At half-track, they were side by side and Singleton’s car broke loose sending him wildly close to the wall as dust and debris scattered, while Loftin had the loud pedal smashed through the floor and drove around with an impressive 3.99 at 179 mph to defeat Singleton’s wild 4.22 at 178 mph. What a drag race! Rodak’s Custom Coffee ‘A’ Field eliminations continued as Dustin Bradford got the best of Jeff Cameron in a pedal fest and Jordan Ballew soloed into the semi-finals after his opponent Tod Barker was unable to make the call with a burnt piston.

AlkyDigger ‘B’ Field action got underway with Eric Eoff and Dave Gallegos taking the line. Eoff drove all morning and pulled into Penwell Knights Raceway just a few hours before final qualifying to earn his spot in the show, but needed another cup of coffee in first round as his 5.06 came up short to Gallegos’ holeshot 5.20 round win. Lyle Greenberg is usually found wheeling his own “Cone Hunter” Corvette nitro burner, but this weekend was handling the driving duties for the Stringer family’s “Blown Cent-less” nitro-powered Chevy. Greenberg sent the crew into a wild celebration as they posted a career-best 4.09 at 182 mph to take the first-round win over Shane Blanton. Tera Graves benefitted from the bye run in the odd-numbered ‘B’ field and posted her best time thus far with a 4.27 at 162 to move into the semi-finals.