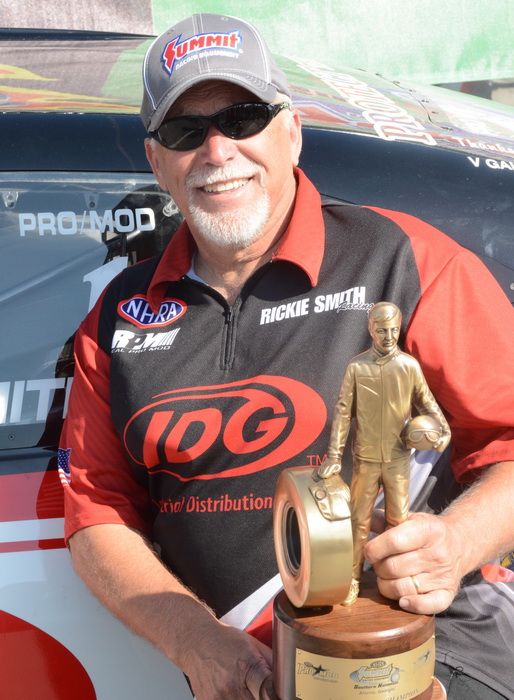 Rickie Smith, an 11-time national champion, is in the midst of one of the strangest, most frustrating years of his long, stellar career.

One of the godfathers of Pro Modified racing, the King, N.C., veteran has reached the finals only once in the eight of 12 races for the class on the NHRA schedule. He’s made it to the semifinals at one other race, been eliminated in the first round of eliminations four times, and was a non-qualifier in back-to-back races at Bristol and Topeka.

Most of the performance shortfalls have been in a turbocharged ‘67 Mustang, though he did finish second to Mike Janis at Charlotte at the 4-Wide Nationals. His nitrous-boosted 2018 Camaro is having difficulty keeping pace with the supercharged entries that have won most of the events to date.

Smith will go into more detail on these topics, but his current state of frustration is based in two areas:

* NHRA has historically kept supercharged, turbocharged and nitrous cars competitive by means such as adding weight to whichever one has a distinct performance advantage … but hasn’t made any such adjustments this year.

* He’s truly concerned that if NHRA doesn’t announce changes to rectify that situation for the 2020 season -- if not sooner, such as during the current long break for the Pro Mods before the Chevrolet Performance U.S. Nationals on Labor Day weekend -- it could ruin the fan-favorite class. 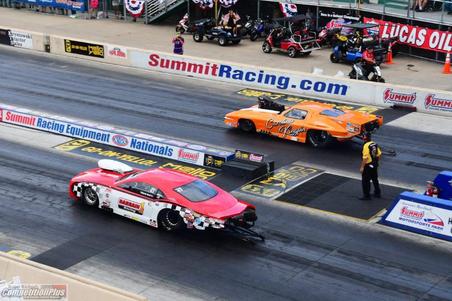 CP: So, back to the disadvantage you feel the nitrous cars are facing. What do you think will happen before Indy? You’ve only got four Pro Mod races left on the schedule.

Smith:  I don’t know. The tech department keeps telling everybody, ‘We’re looking at this, we’re probably going to make a change.’ Well, if they don’t make a change now, when everybody’s got a month, month and a half to test after they make a change, well …

I don’t know what I”m going to run at Indy. I’ve got to get through the end of the year with my sponsors and make a decision based on where the rules go, and if they don’t go where we’re competitive, it’s just not right for me to have to change from what I’m good at. … The fans want to see all three of us (blower, turbo, nitrous). I just hate it. (NHRA has) done it all the years we’ve raced, and then this year they don’t do anything. I don’t know if the management’s not there like it used to be or what’s going on, but I hope sooner or later they figure out that they need to do something or this class will start to suffer with car count.

CP: Have you brought your concerns to NHRA?

Smith: I brought up to the tech people -- Josh Peterson (VP of Racing Administration) and Ned, the main tech guy -- I had a meeting with them on Thursday at Topeka. It wasn’t about rules, but ‘What I asked to speak to y’all about is I’d like to open y’all’s eyes about what’s going on here and I’d like to see something happen. I like Pro Modified, the fans like Pro Modified, and I hate to see the way this class is going.’ They kind of looked at me and said, ‘What do you mean?’ I pointed right outside the door of my trailer at Balooshi’s car, which is a late model Camaro. I said, ‘Guys, I bet you this -- and I quoted them a significant amount of money -- that come Gainesville next year, there’ll be minimum -- I think 13 -- but a minimum of 12 out of 16 cars will be late model Camaros. You’ve ruined Pro Stock by letting that happen. That’s exactly what’s going to happen in Pro Mod.’

There could be more than that because the ones I’m talking to you about, these 12 cars that I’m telling you about right now that I know of are cars that qualify. There are two more being built at Bickel’s and probably a third. Jason Scruggs is coming out with a late model car, Todd Tutterow’s got another brand-new late model car ordered. Al-Anabi group, he’s got one sitting in the shop right now. I said, ‘You’re forcing everyone to do this.’ They just kind of said, ‘Well, we’re going to look at that.’ So Saturday at Topeka, when I went to talk to them about whether we were back in the field or not, they brought that up again. ‘Well, we thought about that rule you said. What would you run if you didn’t run a late model Camaro?’ I said, ‘I’m building a ‘69 Camaro right now to do either turbo or ProCharger being done at Bickel’s now. I don’t like these new Camaros, that’s not Pro Modified.’ They looked at me and said, ‘Well, that’s what we’re afraid of, everybody will build ‘69 Camaros.’ I looked right back at them and said, ‘That’s where you just don’t know what’s going on here.’ They looked at me like, what do you mean? I said, ‘Guys, it’s pretty simple: A ‘69 Camaro is no more aerodynamic than that ‘67 Mustang I’ve got. It’s no more aerodynamic than Pete Farber’s (Dodge Super)Bird. It’s no more aerodynamic than Jim Whiteley’s ‘69 Chevelle. So now everybody can build something different and it’s not about aerodynamics, it’s about what they’d like run out here in older cars. For this new model Camaro, you are forcing everybody to build this particular car, period, if you want to run up front. You don’t think that everybody’s going to do it? They’re already doing it. You’ve already got a problem, and you need to stop it. You can add weight to these cars, you can discourage these cars from being out here.’ And so far, I don’t know if they’ve thought about that or doing that. 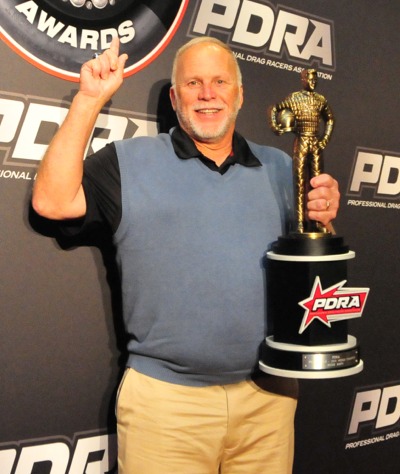 What I want people to understand is that I am not out here to hurt this class, I am out here to bring this class far and hope it does better for people down the road. The fans out there want to watch all different kinds of old cars. They’re not wanting to see another fast Pro Stock class with all late model Camaros racing. That is just plum unreal, that they’re going to let this happen. If they don’t make a change -- mark this down right now -- if they don’t make a change, 12 to 13 out of 16 cars at Gainesville next year will be late model Camaros. I don’t know what’s going to happen. I don’t really want to badmouth anybody, I just want the sanctioning body to look at what’s going on and help this class out so it’s not a disaster in another year. That’s all I’m asking is for them to stop and help this class where you’ve got 30 or 40 cars trying to get in. It’s sure not that way now, and it’s sure going to get worse if they don’t figure out how to fix it.

CP: What would you have NHRA do to bring the blower cars ‘back’ to where the nitrous cars, and the non-late model cars, are competitive?

A pure example of the difference in the cars was Stevie (Jackson) at Topeka. He was not in the show. Stevie goes out in what wasn’t the fast sessions -- not in the field -- and makes a run that puts him No. 1 qualifier. Stevie’s a good racer, I’m a good racer, anybody that is a good racer knows f you’re leading the points, you’re not going out there balls out to be the No. 1 qualifier and you’re not in the show. You’re going out there, cut back a little bit, try to make sure you get down the track, get in the show and be ready to race on Sunday. Stevie pops up, not in the show, and beats the No. 1 qualifier. … Sunday, first round, he made another run just to try to get the feel of the track and then what’d he do, the closest car to him was a turbo car and was four hundreths away. It don’t take a 10-year-old kid to see what’s going on. I just ask these adults to make the right decision and let us all go race.