IT'S THE AUTHENTICITY THAT'S THE FACTOR FOR STOTT'S SOUTHEAST GASSERS SUCCESS 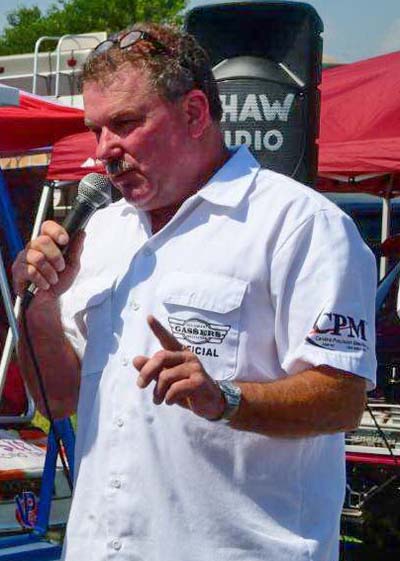 Quain Stott makes no bones about why the Southeast Gassers Association is successful -- and why it continues to grow in popularity with fans young and old, and with racers who relish reliving the past in the present.

It’s the authenticity factor that’s the difference, and you’ll never convince Stott that he’s wrong. The organization’s founder and promoter, Stott possesses a ‘my way or the highway’ mentality when it comes to what a SEGA race will be for the fans and his diehard belief in his strict set of rules. If you don’t want to race by his playbook, go somewhere else. If you don’t want to be ‘period authentic,’ hit the road, Jack, and run with the “copy cats,” which is how he generically refers to the other organizations that bill themselves as gasser groups.

“I wanted to build a car like they raced in the 60s and see what it was really like to have to manhandle a racecar down a racetrack,” said Stott, who competed in Pro Modified from 1994-2013, primarily with IHRA. “So I built me a Willys, and I built it as close to 1960s specs as I could. I bought magnesium wheels. I did every little detail -- the gauges, everything. I wanted to look at a Sun tach and Stewart-Warner gauges. I wanted it to feel just like it would’ve felt like back then.

“Then I found out there wasn’t anywhere to race it. I could bracket race it, but that’s the last thing I want to do. I went to what they call ‘nostalgia racing,’ but you get there, and it’s just a big test and tune -- ain’t nobody racing. None of the rest of the people cared about the car being correct.

“I said, ‘Well, this ain’t nostalgia.’ So I found another guy that had a car like mine, and we started match racing. It evolved from there.” 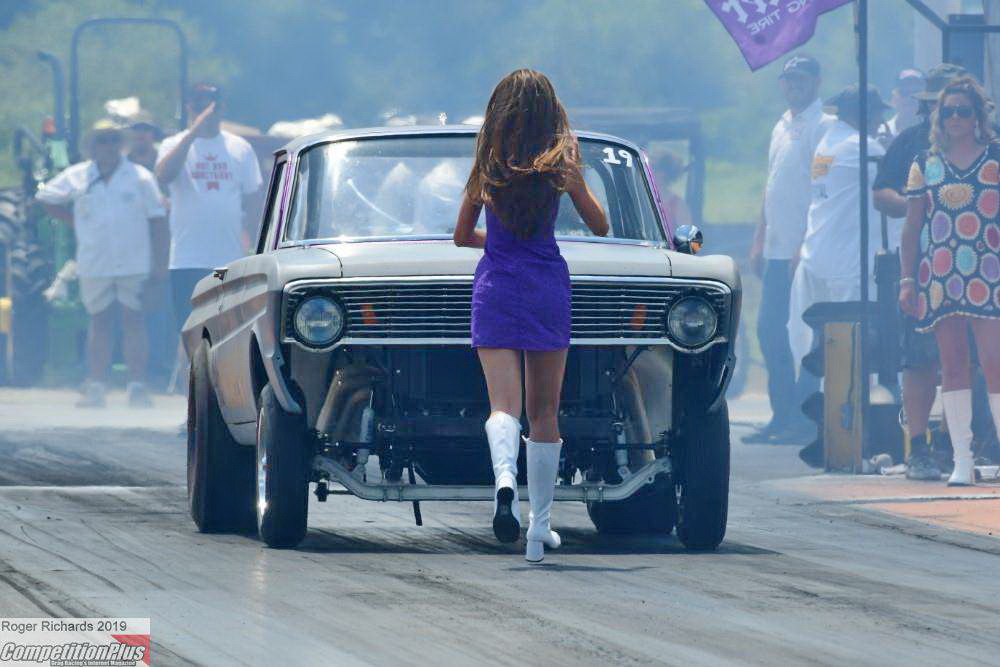 Fast-forward to today and the conclusion of the Southeast Gassers’ eighth season. There were 112 different cars in competition, and Stott estimates there are another 75 in the works. SEGA will put on 11 races next year at 10 tracks -- that’s the maximum number of events Stott wants to promote -- and he said there are 22 other tracks on the waiting list.

One Texas racer, Rod Burgner, made every SEGA race in 2019, with the track closest to him being 14 hours from home. Sweden’s Magnus Karlsson is having a ’55 Chevy built to SEGA rules for 2020 competition.

“The part that makes that so amazing is that when I started this, I was told I was stupid, that there was no way it would ever work, that my rules were too strict,” Stott said. “People would tell me, ‘Your rules are causing people to build cars wrong on purpose. Who in the world is going to spend the money to build a racecar with this old, 1960s technology when the new stuff is here?’

“You kind of have to turn your head to what’s right to build one of these cars. Here I am, a Pro Mod car builder trying to build a car using ’60s standards. But it ended up catching on, and we think now that’s because it is a challenge to drive. It’s more of a race now.” 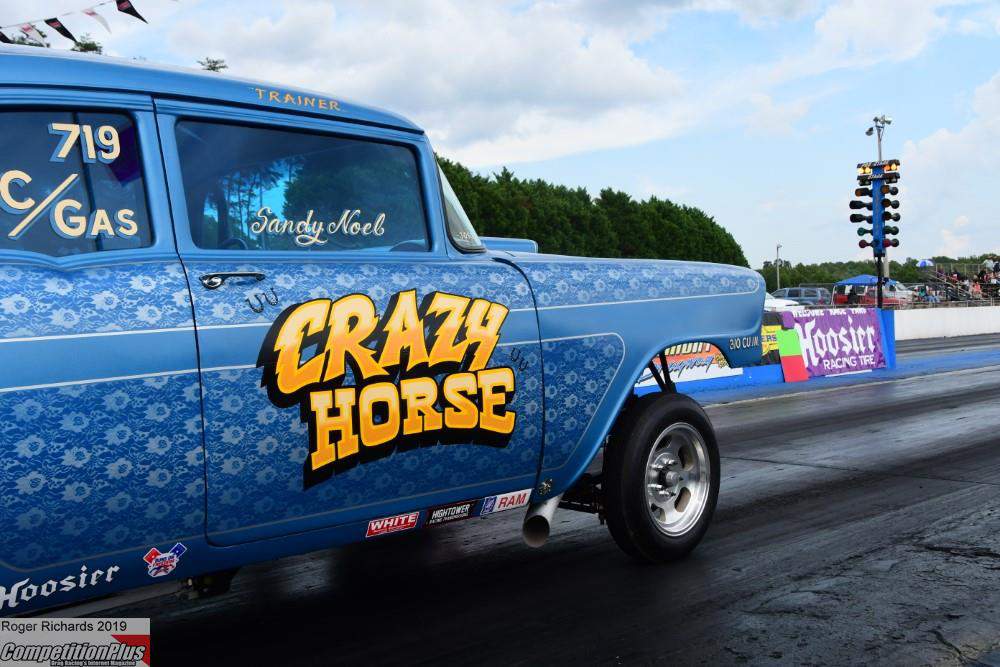 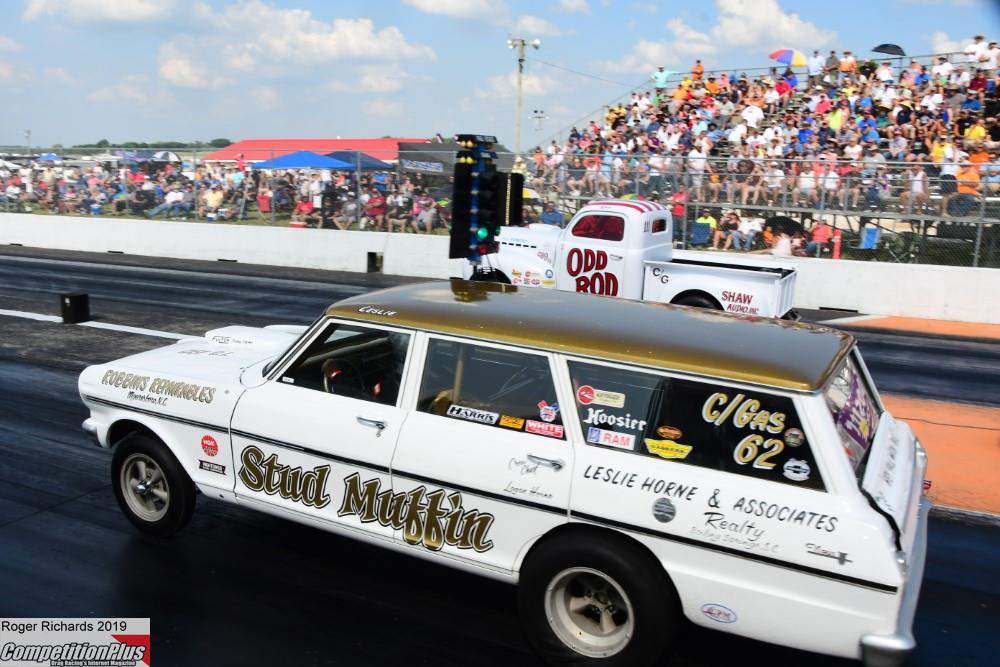 When Stott says he wants authenticity, he’s as serious as a heart attack, all the way down to the appearance of the decals on every car. And if a company wasn’t around back then, then its decals have to be altered in a way that they have an old-school look.

No driver aids of any type are allowed on SEGA cars. The cars must be equipped with 60s-era suspension technology, “so they drive horrible,” Stott said, and they have to have a four-speed transmission. All gear shifting by the drivers must be done through the clutch. Tires are limited to an 11-inch maximum, just as in the ’60s, and there’s a standard ride height because Stott doesn’t “want them stuck to the ground,” he said. 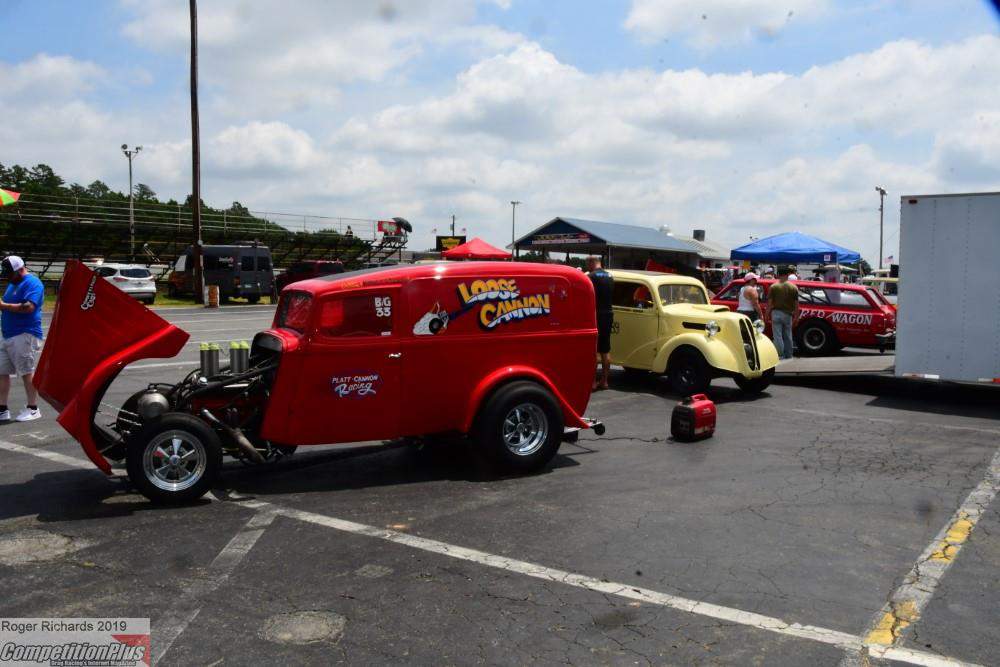 “We want you to show up at one of our races and feel like you’ve come through a time tunnel,” he said.

Playing an important role in achieving that effect is the fact that a Southeast Gassers event is Southeast Gassers cars and absolutely nothing else. In fact, cars that don’t fit SEGA’s rules aren’t so much as allowed to park in the pit area of a given track.

“That way, we can put on a 1960s show,” Stott said. “We don’t want them going back and forth from the ’60s to some fox-bodied Mustang that pulls up in the middle of the show, purges the nitrous system and destroys the whole effect. I tell people, ‘Forget your age. Pretend that today is 1967. Think back to when you were 18 years old and enjoy the race.’ I’ve had people tell me, ‘I forgot how old I was today.’ “

One such example of that is Art Copeland of Buford, Ga. 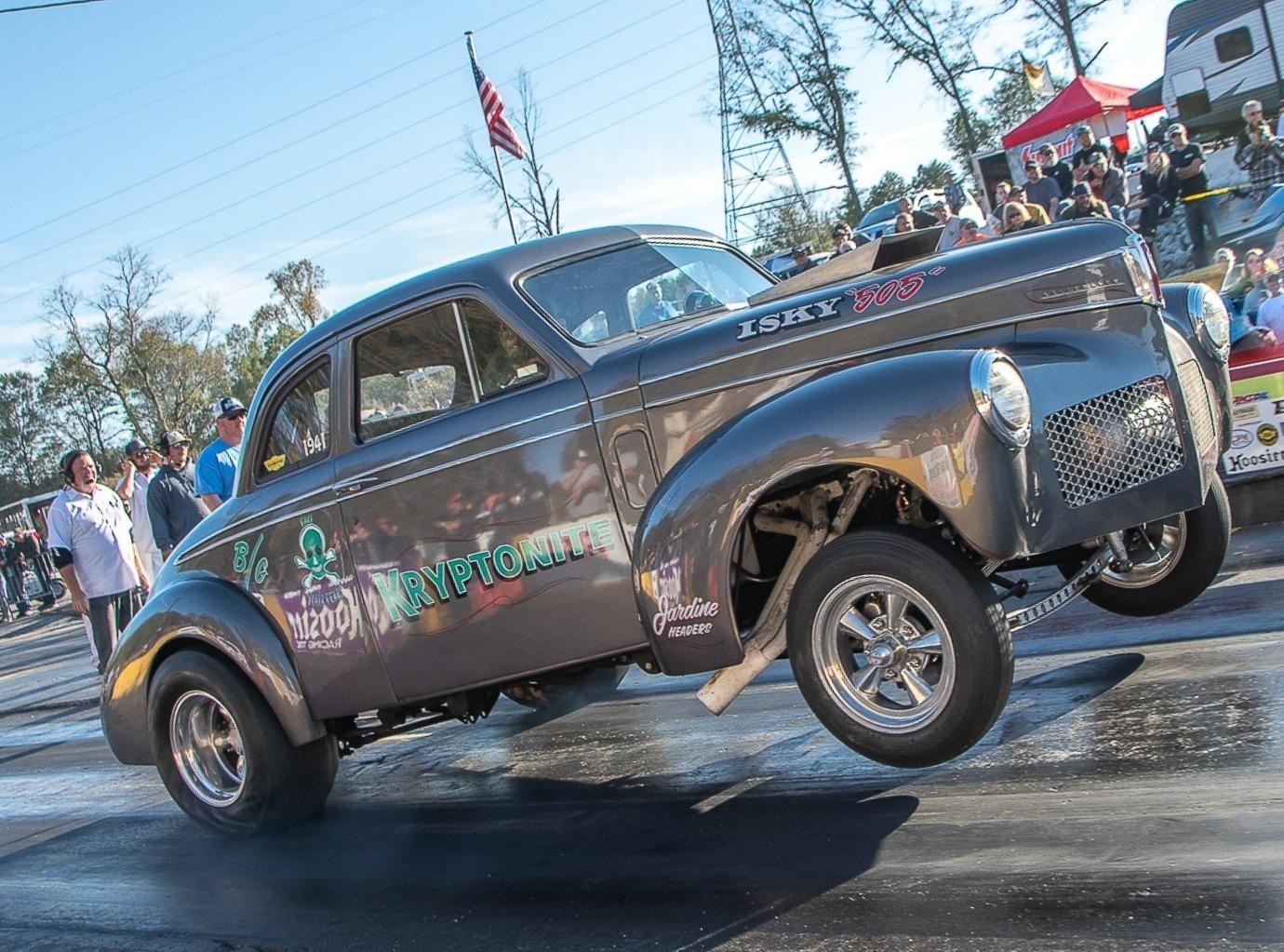 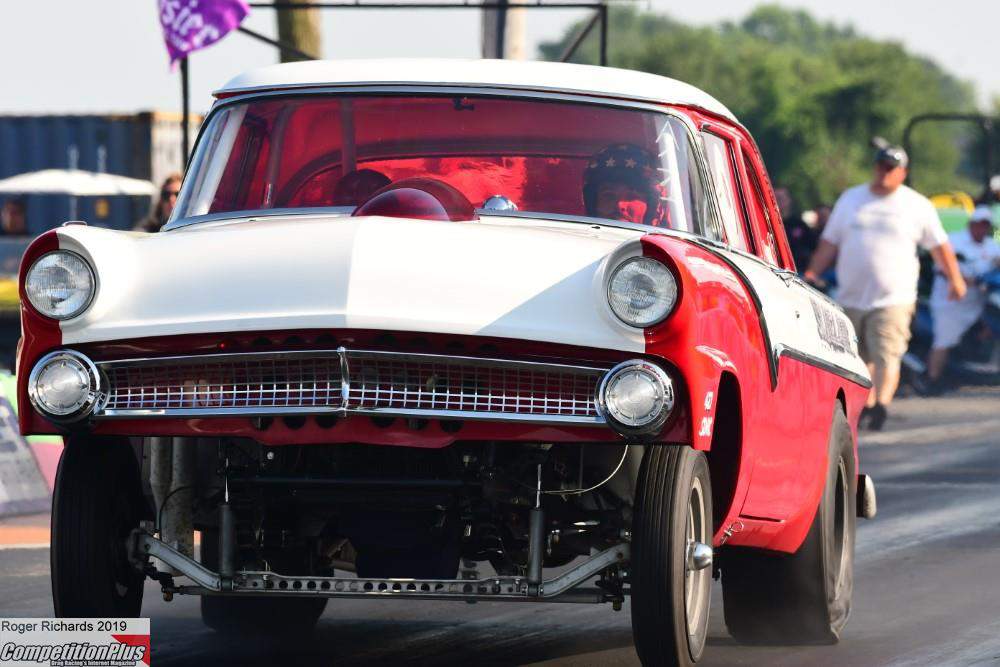 After a four-year stint in the Air Force, Copeland came home and began racing, at one point in the mid-70s fielding a Pro Stock car he’d bought from former IHRA competitor Billy Ewing. Then came the responsibilities of marriage, raising children and providing for his family, and Copeland put racing on the back burner and forgot about it.

Eventually, friends told him about a great vintage drag racing show they’d seen, so Copeland decided to make the drive to Chattanooga, Tenn., to check out one advertised as a “gasser” event. To describe him as disappointed is an understatement.

“It was a total joke,” Copeland said. “There were maybe 20 cars racing. There was bracket racing, and everybody ran an automatic. I don’t think there was a four-speed car in the crowd. There wasn’t anything that was period-correct. I’d made up my mind I’d never go to another so-called ‘gasser’ race.

“Well, this buddy of mine and I get together every Wednesday night to drink beer and bench race, and we found a video of one of Quain’s races. We watched five or six races, and it really piqued my interest.”

Those videos were enough to convince Copeland to make a three-hour drive north to Shadyside Dragway in Shelby, N.C., for a SEGA race. While there, he found a 1941 Studebaker coupe racer that was for sale, and he wound up acquiring the car. 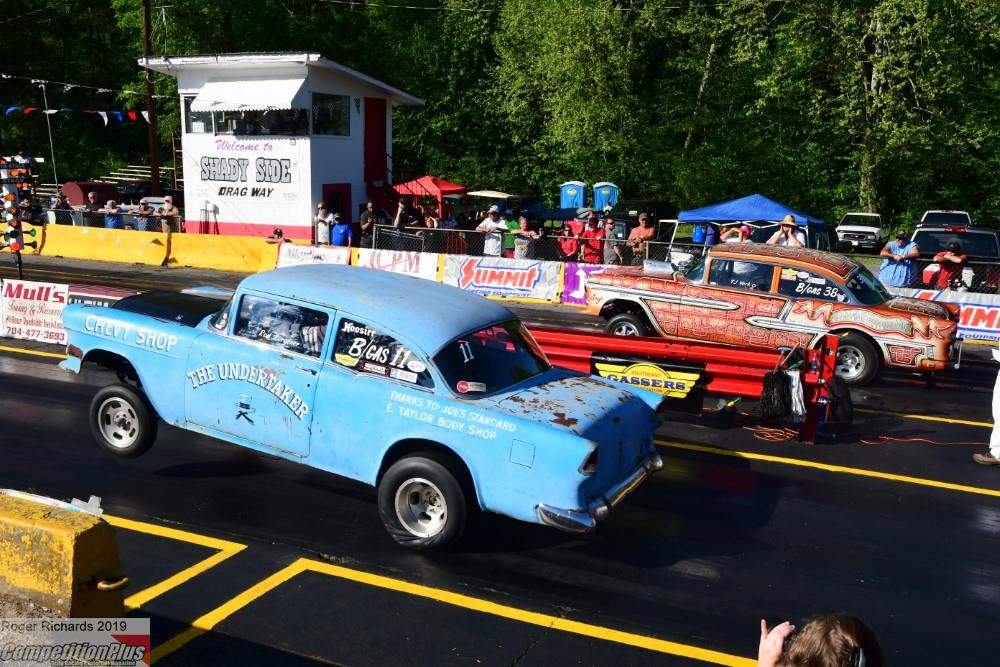 Now the B/Gas entry called “Krytonite” is a SEGA regular. Copeland’s business, Vintage Pine Flooring, sponsored the 2019 Southeast Gassers race at Knoxville Dragstrip and will be the title sponsor at the track’s Sept. 26, 2020, event.

“I’ve got the fever,” Copeland said, “so we’re in the process of tearing the car down now and doing some upgrades for next year. If we hadn’t found the videos of Quain’s races online, I’d have never even gone to another gasser race.”

Promoting a racing series is far more difficult than driving a Pro Mod car, Stott said from his Columbus, N.C., office. In hindsight, if he’d known how much of a time-consuming challenge it was going to be, he might have shied away from the notion.

“I talked to (former IHRA president) Bill Bader Sr. a few weeks ago, and I told him I wanted to apologize for being such a pain in his ass all those years,” Stott said. “I never knew how much trouble it was to run a racing organization.”

And now, he said he’d discovered, “I’m dealing with a bunch of Quain Stotts aggravating the s*** out of me.” 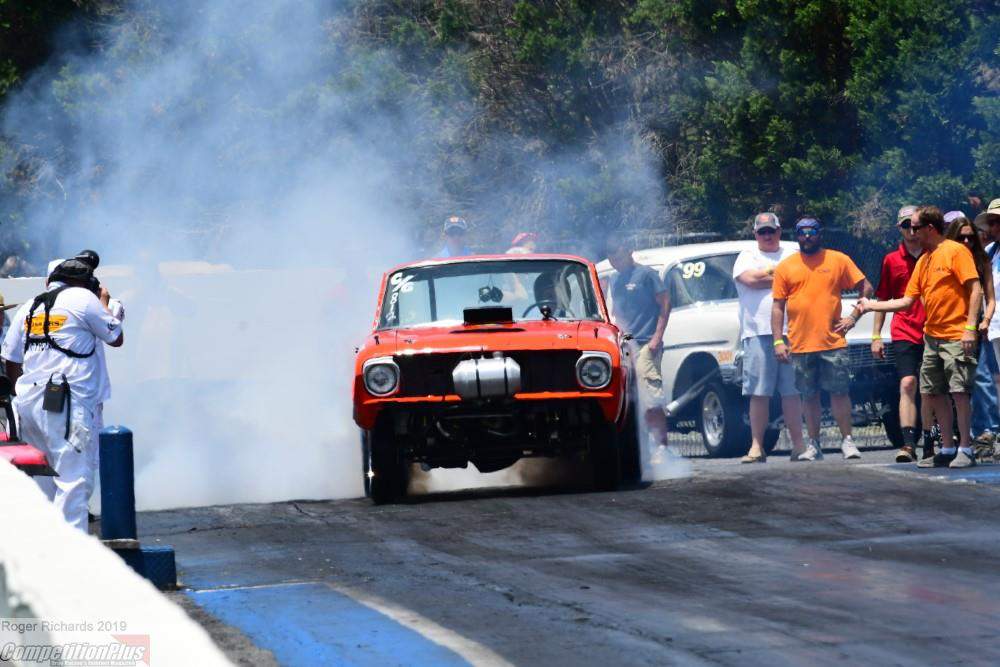 But nothing gets under Stott’s skin as much as the others who bill themselves as gasser groups. He said there are nearly three dozen organizations that loosely fall under that umbrella, but boasts that SEGA is the only one that requires its cars to burn gasoline and nothing else. Southeast Gasser competitors fit into A/Gas, B/Gas, C/Gas, or Super Stock, and they’re classified by cubic inch-to-weight ratio. Yes, the cars are weighed, and the engine displacement checked.

The other groups are “dummies are leaving out the main stuff that’s made it work,” he said.

“There’s a new so-called gasser group that pops up just about every day,” Stott added. “Everybody’s jumping on the bandwagon, but all they’re doing it is destroying it by diluting the product and giving it a bad name.”

There’s more behind Stott’s philosophy for the Southeast Gassers than simply producing an event with old-time cars on the track. It goes much deeper than that. 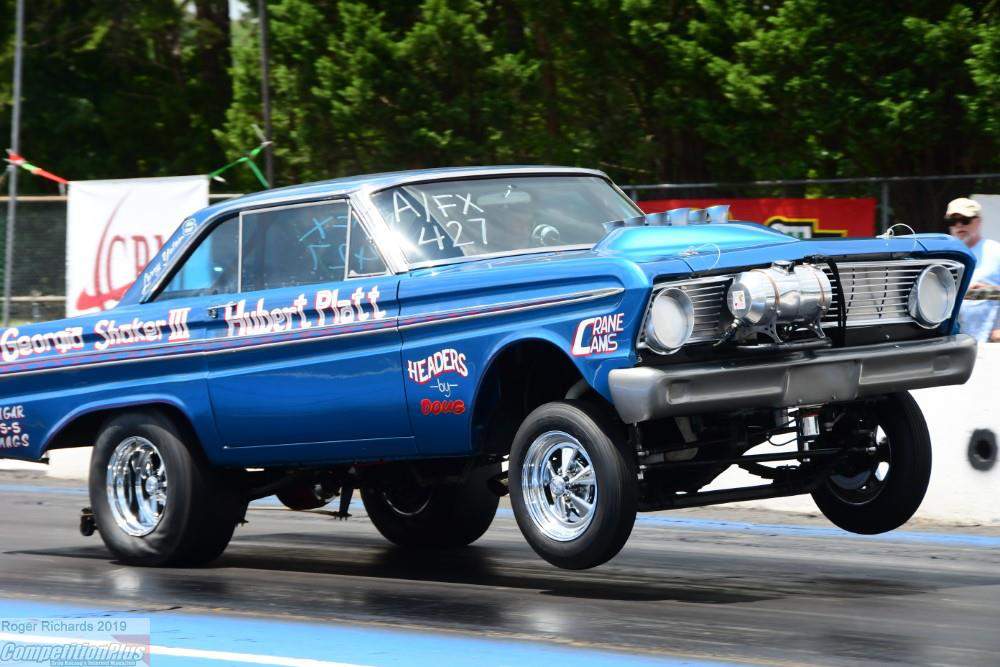 “The racer mentality has been lost for so long in sportsman racing. Nobody has any incentive to go home and work on their car to make it faster,” he said. “People nowadays go buy the parts, they order an engine, they order a transmission and converter, they order a chassis, they put this stuff together, and whatever it runs, they’re happy with it.

“You can do that over here, but you’re going to be behind if you do. You can bet the man in the lane next to you has been laying under his car all week working on it. That’s what racing’s lost. When all you had to do was swing by the shoe store and get a bottle of shoe polish, and you’re competitive, it killed it for spectators.

“I go to some tracks now, the bleachers are in shambles, and the P.A. system doesn’t work. When I ask what’s up, they say, ‘We don’t have spectators anymore, so why do we need bleachers? Why do we need a sound system?’ They’re making their living off the back gate, which means the racer. I don’t charge my racers. They come in free; their crew members come in free. Our races have something called spectators. Track owners ask me, ‘How do you make that work if you’re not charging the racers?’ I tell ’em, ‘Buddy, if your show sucks so bad that you’ve got to charge your racers to get in, something’s bad wrong.’ “

At Southeast Gasser shows, Stott’s take is 60 percent of the spectator gate and zero from concessions, and that’s what he uses to pay the race purse and his staff of nine. The track operators, Stott said, are “knocking a home run” financially when they get a SEGA race.

“All they’ve got to do is unlock the gate for me and prep the track,” he said. “Even if it rains out, all they’ve lost is the track prep.”

The 2020 Southeastern Gassers schedule kicks off a few weeks earlier than usual due to a Deep South locale. The lidlifter will be March 21 at Emerald Coast Dragway in Holt, Fla., followed by an April 18 show at Shadyside. The other confirmed dates are July 25 at Wagler Motorsports Park in Lyons, Ind., Knoxville on Sept. 26, and the season finale at Shadyside on Nov. 7.

To find updates on the 2020 itinerary, visit southeastgassers.com.