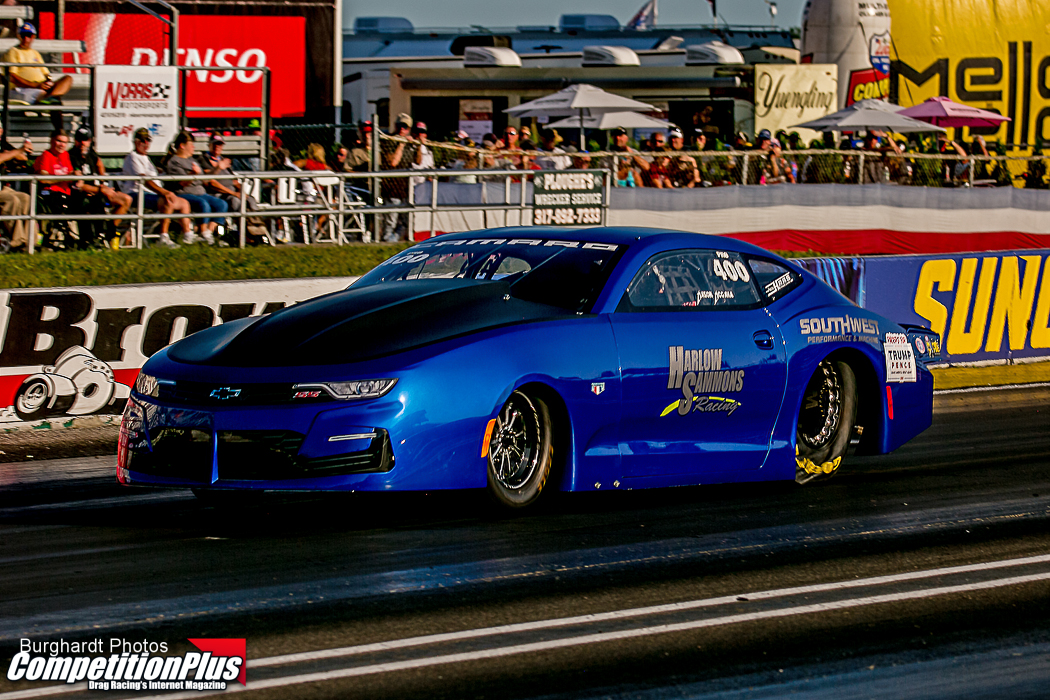 The Pro Stock debut of Mason McGaha was a year in the making.

McGaha, 18, made his debut in the 2020 season and not surprisingly there has been some growing pains.

Mason’s reward was racing against his father, Chris for the first time in round one.

“It wouldn’t be 2020 without my dad and I pairing up in my first-ever elimination round and the whole way it went,” Mason said. “That was the first I ever had the light flicker like that. My dad and I discussed that, and he said if I ever did that and got on the chip don’t let off because that light is going to be coming if the tree comes down. I must have obviously thought about it enough in my head where I was prepared, I guess.”

Once Mason left the starting line with a hole-shot the rest was a blur.

“I never really saw (my dad),” Mason said. “I’m also not used to all of it yet, so I don’t see any of the outside stuff. I was going and it felt like a good run and then I saw the win light come on. At the end of the track, my dad laughed and gave me a hug. I told him I was sorry I flickered the light and he said don’t be sorry. I don’t know how to describe it. It was like that really just happened.

“It gave me confidence and will let me relax more and just go up there and do my thing.”

According to an NHRA official, the only other time fathers have raced sons in Pro Stock eliminations was Bob and Billy Glidden, Warren and Kurt Johnson and Shane and Johnny Gray.

In second round, after a lengthy rain delay, Mason beat Kyle Koretsky, who registered a red-light.

“I knew I got at the tree, but I dropped a valve and she was able to get around me,” he said.

Mason was pleased with his progress was made this past weekend.

“We got better,” Mason said. “I’ve always wanted to race Pro Stock. Ever since I was a little kid watching it on TV Pro Stock is what I wanted to do.”

Mason raced Junior Dragsters from age 8 to 16. Then, bracketed raced in his family-owned cars.

“The hardest thing for me (with Pro Stock) is the burnout,” Mason said. “There’s a lot you have to do in such a short period of time. It is all getting easier and getting where I can do it pretty well.

“It was probably all this got delayed for me because (of COVID-19) because we were planning on getting going early in the year and it was such a hard transition and I got behind. We tested in Bradenton (Fla.) in January and after the Phoenix race in February and we were hoping to debut in Gainesville (Fla.) in March and then it got canceled. We were able to catch back up and debut at the first Indy race.”

In addition to racing, Mason recently started his freshman year at the University of Texas Permian Basin in Odessa.

“I’m going to major in mechanical engineering,” Mason said. “I’m always around this sort of (Pro Stock) stuff so it is what I know. I got incentive from grandma and grandpa that I get an engineering degree that I will have incentives if I can get there.”