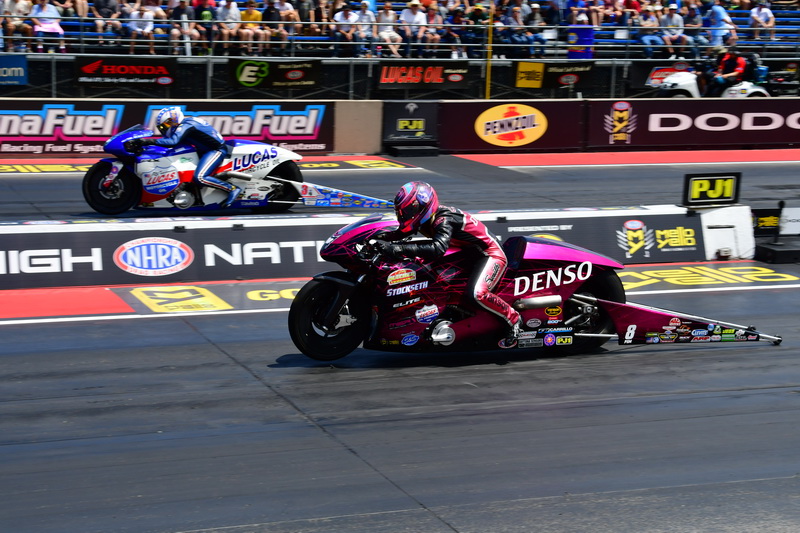 Smith, the reigning world champion, wasn’t happy about the perennial powerhouse Vance & Hines Harley-Davidson team of Andrew Hines, Eddie Krawiec and Angelle Sampey getting to debut a new FXDR body over the weekend at the Mile-High Nationals – a race Hines won.

Now, Smith has another issue that has him fuming. The NHRA tech department informed Pro Stock Motorcycle competitors it was making some rule changes for use of the Erik Buell Racing (EBR) body in competition.

An NHRA spokesperson told Competition Plus that part, (the belly pan on the EBR bodies) is not approved for competition currently.

Therein lies the rub for Smith and every rider using the latest EBR design, with the bellypan declared unapproved by NHRA's technical department. Apparently NHRA tech officials were made aware of the dimple design last August at the NHRA event in Brainerd, Minn. The same design, also with the "unapproved" bellypan, once again went through the NHRA's design template in Gainesville, Fla. Each component of the body has a chip embedded, including the bellypan, when the bodies are approved in competition.

CompetitionPlus.com contacted NHRA for comment as to why the bellypan, which was legal for almost a calendar year, all of a sudden became unapproved the week before the eight-bike Michkey Thompson Shootout which includes three Harley-Davidson and five Buell competitors.

‘My beef is over this whole belly pan that NHRA put a new rule out after Denver (July 21),” Smith said. “I don’t know how it got on the internet, the letter, but then everybody started calling us cheaters. ‘Oh, Matt Smith, you have had illegal body work and your 200 mph runs should not count and your championship (2018) shouldn’t count and your wins. I just want to go on the record and state this rule change effects team MSR (Matt Smith Racing, Matt, Angie Smith and Scotty Pollacheck), Ryan Oehler and the Aranas (Hector Sr. and Hector Jr.). There are also two more (people with EBR bodies) who haven’t come to the track yet that have bought body kits from them. The biggest thing is I wanted to get it out that we are customers of Hector Arana (Sr.) who is selling the bike. So, this beef with the belly pan is between Hector Arana Sr. and NHRA. NHRA approved the belly pan.”

“The belly pan is underneath the motor and I took the belly pan off my bike and showed everybody what they are griping about,” Smith said. “In the rule book it says that you don’t have to run a belly pan on the bike. It says you can run an engine diaper, but they allow you to run a belly pan if you want. In the thing it says the belly pan can not consist of holes or some vertical walls or whatever. Our belly pan doesn’t have holes and I showed it. Our belly pan, the one that Hector has, has dimples. The bottom of the belly pan kind of looks like a golf ball. They are deeming that as illegal and Hector did not submit that. Hector tells me that he submitted that. I asked NHRA to show me the pictures of where Hector submitted the flat belly pan because through this whole process, I have submitted two bodies over the last five years. One for Victory and one through Victory. We had to submit photos for every body piece and they took pictures. There’s no answer of where the pictures are at or what he submitted. One, somebody has dropped the ball or two he submitted a flat belly pan and now they are wanting to change their minds. That’s not my argument.

"My argument with the whole public was people calling me a cheater. I did what I was supposed to do. I could not make or produce this bodywork, I had to buy it. I bought a legal NHRA body kit and now they are deeming pieces of the body kit illegal.”

Smith also said his EBR bike has been an open book for NHRA to inspect.

That’s hard for Smith to digest.

“This is stuff Hector Arana has been running for over two years,” Smith said. “He brought that body out over two years ago and ran it and I know Junior (Hector Arana Jr.) it was on his bike last year starting the year and he went 200 mph with it at Gainesville. They were the only ones able to run that up until I got the next body, which was at Brainerd. The timing of this is very weird.” 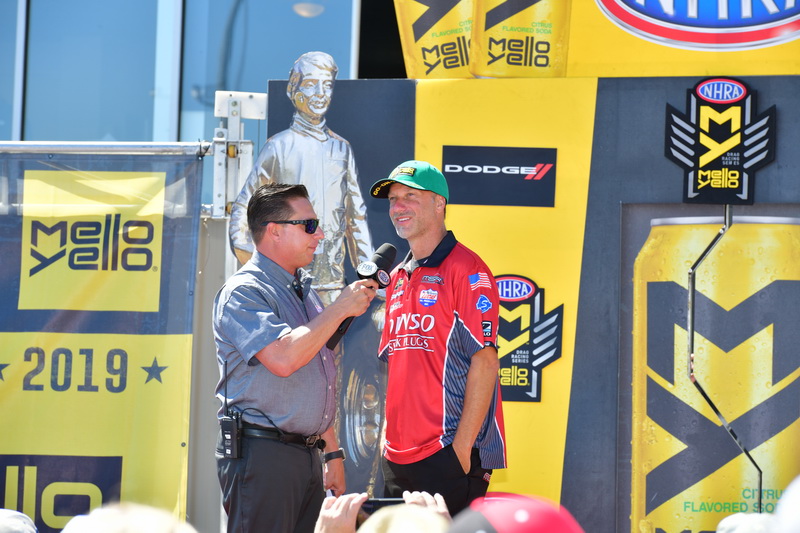 The competitors competing with EBR bodies don’t have much time to comply to the NHRA rules regarding the belly pans on their bodies. They race at the Sonoma (Calif.) Nationals July 26-28 and during the weekend, the Mickey Thompson Pro Bike Battle, a race within the race, will take place Saturday with the top eight riders in the class competing against each other for a $25,000 prize. Smith won the Mickey Thompson Pro Bike Battle a year ago.

“We don’t know what this is going to do,” Smith said about the change he'll have to make to his belly pan. “We don’t know if this bike was designed with this in mind of making it go straight going down the race track because there might be an aero problem, we don’t know. We don’t know the whole thing. I begged NHRA to let us get through Sonoma, let us have time to test the correct belly pan they want on the bike now and we will be ready for Indy (Aug. 28-Sept. 2), and they said absolutely not. I told them we have two days of driving from Denver to Sonoma and then we have a day to monkey up our belly pan to make you all happy. With not being at home, not having anybody fabricate this for us, this is something we have to do before we can race at Sonoma.

The other funny thing about this whole thing is the shootout is this weekend and it is a big-money race. There are five EBRs in there and three Harleys (in the Mickey Thompson Pro Bike Battle). Good timing for this isn’t it? I think this is a plot to try and slow us down and get us off our game.”

That thought process brought Smith back to the place the Vance & Hines Harley-Davidson team has in the class.

“To me, Harley, has been good for our sport because we have grown a little bit, but I think they are bad for our sport because they are not letting any other manufacturers come in,” Smith said. “I had Indian (Motorcycle) coming in after the Victory deal and they ran them out because they would not allow them to be on the Midway to display and do what they needed to do. It is just a bad deal. That’s why Suzuki is not out here. That’s why nobody else can get a manufacturer out here and where the big bucks are at in this racing anymore is manufacturers being in the sport. You have Dodge, you have Toyota, you have Chevrolet and you have Ford, they are all out here in the industry, but we can’t have anybody, but Harley-Davidson and I just think that’s wrong.”