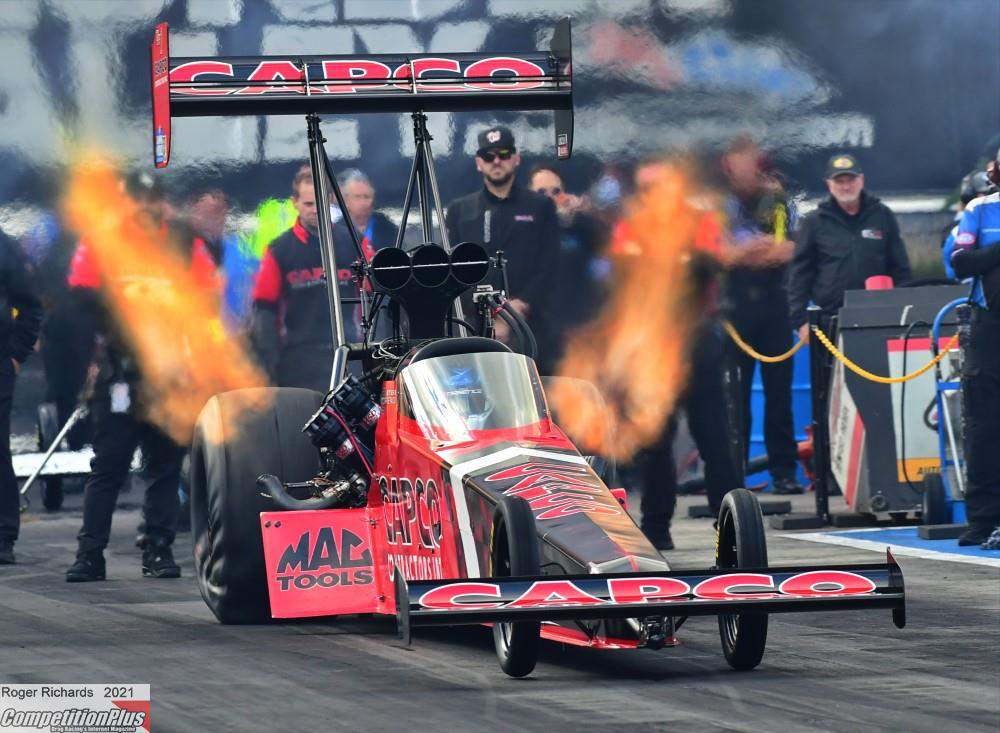 Steve Torrence is used to being the class of the NHRA Camping World Series Top Fuel class.

He’s the reigning three-time world champion and now he’s the No. 1 qualifier at the Thunder Valley Nationals at Bristol (Tenn.) Dragway.

Torrence, who entered the weekend atop the Top Fuel season standings by 52 points, claimed the top spot with a blistering 3.667-second elapsed time – a track record – at 331.28 mph.

“That was actually really big for us,” Torrence said. “We have been picking at that a little bit over the last few races. Grubby (David Grubnic, Brittany Force’s crew chief) has definitely gone out and shown everyone that he’s the home run hitter who swings for the fence and he’s got it more often than not now where it sticks. That’s a weapon in his arsenal we need to try and match and take away.

“Richard (Hogan) and Bobby (Lagana, Torrence’s crew chiefs) have been working really hard at it and it is something you don’t just do over night. You have to work at going 65, 64, 63. Ironically enough, the run my dad (Billy) had in Q2 today should have been a 65 and he’s sitting here and we are not, but he had a little malfunction, and it didn’t work. It gave us a little bit of data we needed, and that information allowed Richard and Bobby to push.”

This is Torrence’s fourth No. 1 qualifying spot this season, with others coming in Gainesville, Fla., Houston and Norwalk, Ohio.

“That run, the car was super quick early, and the wheels were up,” Torrence said. “It is through the 60 foot with the wheels up and then it sets it down and the next thing you know I’m trying to ease the car back over, you don’t want to make a sudden move and upset the car. The car hits the bump and I see the front wheels come off the ground again. I know I’m out of the groove a little bit to the right. These things are so different now than they used to be with the 5-disc and 6-disc clutch, and I felt it pull the motor down. We went 331 mph and we needed to try and run a little bit more mph but when you get that ET early it hits the rev limiter a little sooner. That was a confidence builder.”

“(Sunday) the conditions are going to be just like this, maybe a little bit cooler,” Torrence said. “You have to go, and you have to be able to throw down and we are in thick of this championship hunt. We are going to have to throw our best shot every time. No one has ever raced here in these conditions this time of year when it is this cool. NHRA and Safety Safari has done a great job with the track prep but going into Sunday you have (Mike) Salinas, Brittany (Force) and Josh Hart and Justin Ashley and my dad. That is a team car, but they try and kick my butt every time I come up against it. It is going to be a throwdown and a great show for the fans, for sure.”