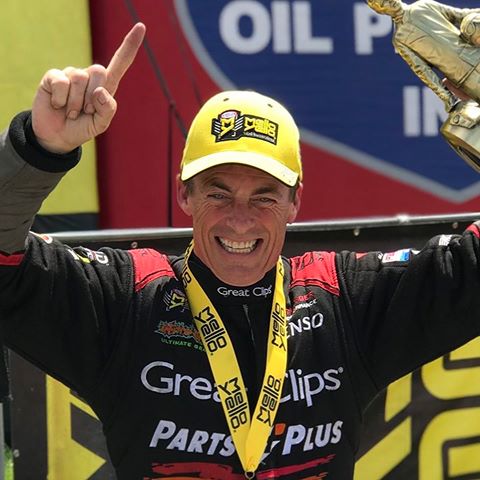 The recently completed event at the Texas Motorplex is a special one for Top Fuel racer Clay Millican, mainly because it’s “one of the first races my parents let me go to without them when I was racing Super Comp. I raced Super Gas first, but one of my parents usually would go.”

However, the high-schooler from tiny Drummonds, Tenn., had chaperones – his two sisters.

“Now, because I travel so much, the Texas Motorplex seems like a short trip to me. It’s basically eight and a half hours from home. But at that age, it was like a trip across the world because it wasn’t like we traveled that often,” Millican said. We certainly raced all the time, but it usually was within an hour or two of the house. So coming here was a huge deal, especially without my parents coming with us.

”But we went there, me and my two sisters, in a single-cab dually with a granny gear four speed, so we were like all cramped together. So it was a trip we always remember. When I think of Dallas, that’s what I think of. I mean it just is. It’s kind of like, kind of like the parents letting us become adults a little bit,” he said. “Now my one sister is three years older than me. It was the first time we had a hotel room that we got our own hotel room, all that sort of thing. It was just one of those things that always comes to mind. My sister’s older than me, but she was still a kid.”

The other sister is younger. “I’m the deprived middle child, unless you ask them. If you ask them, you know, I was the spoiled only boy. I don’t even know what I did at that race. It doesn’t matter. No clue, but I just remember that we made that trip, just me and the sisters, and it was fun,” Millican said. “It's a special spot for me.”

He promised they didn’t do anything wild and rebellious.

“No, we didn’t. I’ve always been a non-drinker. My sisters are, as well. So, nah. No funny business,” Millican said. “We still laugh and remember that I was paranoid because the first night we got here, we couldn’t park our race car in the track. So we had to leave it parked outside at the hotel, being nervous something would happen to the car. What would we do? That sort of thing. It was just a trip, like I said, one of those cool memories you have doing stuff with your sisters. We really enjoyed it. It’s just a cool memory just because we did that. They couldn’t help me drive, because they didn’t want to drive the manual shift truck. Man, it was a blast. I really just enjoyed it.”

Another time he came here to Ennis without his parents – but under far different circumstances. In October 2003, just a day before Millican was set to race at the track located outside of Dallas, his mother, Martha Millican, sustained a gunshot wound to the face when an armed young man held up the family’s grocery store in Drummonds.

Robert Hight climbed behind the wheel of his race car a little over a week after surgery to repair a broken collarbone suffered three days earlier when the engine in his Camaro exploded during the final round of the NHRA Midwest Nationals. https://t.co/1Lfc2Iob1C

“When I went to see her at the hospital after she was shot, the first thing she asked was whether I had packed for the trip," he said. She was released from the hospital that Friday. At his mother's urging, Millican made a last-minute decision to come to the event. He drove his 104+ Octane dragster to a 4.588-second run at 314.57 mph to take the provisional No. 1 qualifying position that Friday night. "After I ran the 4.58, I was able to call my mom, and she listened to the last two pairs of cars run down the track to see if the number was going to hold up," he said. "I was able to give her the No. 1 qualifier [that evening].”

He wound up starting fifth that year and didn’t earn his first No. 1 qualifying position for another 10 years, not until the 2013 Englishtown, N.J. event.

Martha Millican is still active and still has the bullet embedded in or near her sinus cavity. “She’s fine. She can’t go through the airport security very easily, but yeah, mama’s still kicking. She’s doing really well,” Millican said.

At the time of the incident at the store, Martha Millican used to tease, “You’d better watch out or I’m going to sneeze and shoot you.” Her son said she still says it: “every now and then, if we get her wound up too much.”