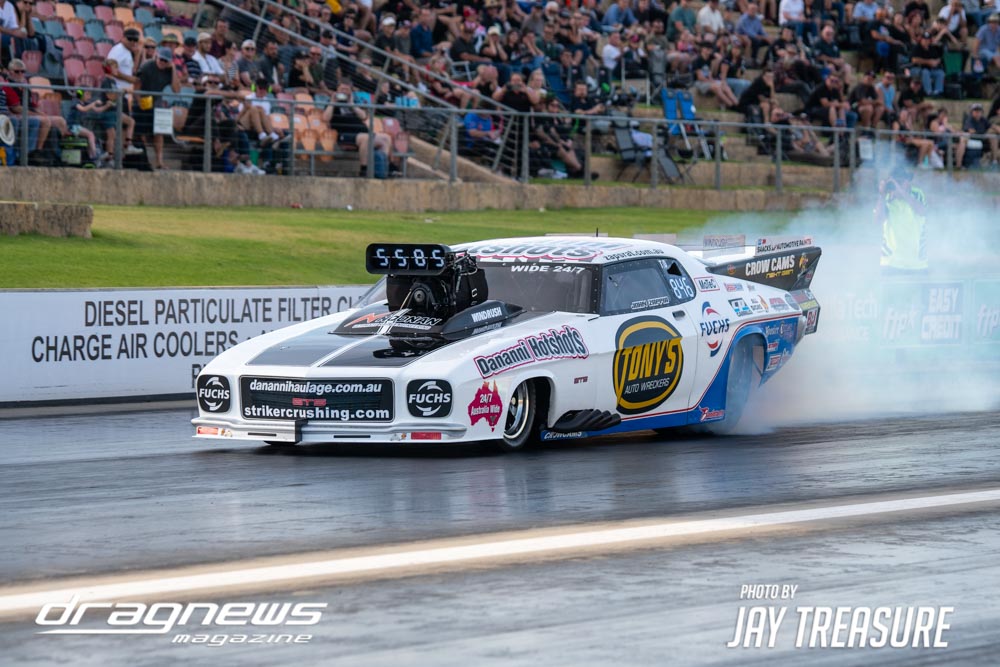 A B-Final win at the Nitro Slam proved enough to leapfrog John Zappia into the lead of the Direct Mining & Industrial Summer Slam Series on Saturday at Perth Motorplex.

Zappia overcame a series of gremlins on a day where his hard-working crew of volunteers was put to the test physically and mentally as they turned the Dananni Hotshots/Tony's Auto Wreckers Monaro Top Doorslammer around.

“On the first run the car had an electrical miss that we chased back to some leads, but the second run was more dramatic when we backfired the supercharger,” he said. “The car left well but when I hit third gear it went pop and we rolled through for a 5.99.”

Zappia qualified fourth and faced Stu Moresby in the elimination round, one of the drivers he needed to get past in the championship.

“We couldn't find any obvious cause for the backfire, so we added more fuel to the tune-up and got back out there with the team working really hard to repair the damage. We needed to beat Stu to move up in the championship and when he had tyre shake it looked like luck was back on our side. Then 'boom' again, backfiring the burst panels on the blower!”

During the run, another backfire slowed Zappia to a 6.08, though fortunately he took the win as Moresby was unable to recover from his woes early in his run.

“This time when we pulled the motor apart we could see the number three cylinder spark plug was burned and so we ended up changing the piston, the rings, gudgeon pin and a couple of valves in the head, not to mention the burst panels. The guys got the supercharger back on and we were back into the staging lanes just in time for the final against Mark Chapman.”

Finally there was relief for the Dananni Hotshots/Tony's Auto Wreckers crew as Zappia bolted to a 5.76/253mph, which would stand as low ET of the class.

“For an event where we had to thrash the whole way, we were pretty happy in the end,” Zappia said. “Kelvin Lyle got the A-Final win with his Zappia Racing (ZR1) engine package so to have two Zappia Racing motors wining both the A and B final and that was pretty cool.”

“Halfway through the season it's anyone's championship to win. We've had three events with three different winners, so the competition is as hot as it has ever been.”

The next round of the Summer Slam Series takes place on January 23 at the Night of Fire featuring Jet Dragsters.