This at 8:00
pm fans will be able to listen in as Scotty Cannon Sr. is
interviewed by Steve Letempt live online on RealRacinUSA.com.

RealRacinUSA.com is an internet motorsports website with
live radio dedicated to many forms of motorsports. Letempt announces for the
IHRA Nitro Jam Series as well as the All Harley Drag Racing Association.

The 2007 season continues to be
a year of major racing infrastructure projects at Bandimere Speedway, with no
slow-down in sight. 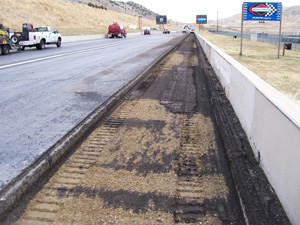 Once
the final car went down the track for the 2007 season, a major track
re-surfacing project began at Bandimere Speedway in Morrison,
Colorado.  Beyond the existing concrete surface extending to the 660’
mark, the remaining asphalt to the finish line at 1320’, plus an
additional 60’ past the finish line has been removed.  Over 4,100 feet
of under-track drainage and 30,000 feet of rebar have been laid in
preparation for over 900 yards of concrete to finish the surface.  Once
complete, it will be one of two all-concrete tracks hosting an NHRA
POWERade event, the other being the Dallas Motorplex.

Many
Flowmaster American Drag Racing League fans will remember John from the 2006
ADRL Gateway Drags, where he was able to fulfill a longtime desire to ride in a
drag racing car. At that event, ADRL President Kenny Nowling made a full pass in
a '69 Camaro Pro Streeter, with a thrilled Winberry safely buckled in on the
passenger side. The heartwarming scene drew a thunderous standing ovation and
led to a lasting friendship between John and the ADRL community.

Due
to the continued record increases in the cost of raw materials and energy,
Yokohama Tire Corporation announced it will increase prices on its consumer
tires up to seven percent; medium truck tires and light truck commercial tires
up to four percent; and Off-The-Road (OTR) tires up to five percent, effective
January 1, 2008.  All three divisions
will include in-line adjustments, which will be announced at a later
date.

Every
Friday, Torco's CompetitionPlus.com brings you our Feedback letters.
Read what our readers have to say about our feature articles and you
can even offer your opinions.

The field is already
shaping up for the inaugural Torco’s CompetitionPlus.com WAR STORIES Showdown.
This will be the competition where members of the drag racing community will be
paired on an eliminations type ladder and eliminate one another on the basis of
who can tell the best war story.

There will be four rounds
of eliminations that will narrow down to a single winner. Each match is
determined via reader vote.

Fri, 2007-11-30 08:27
Torco's CompetitionPlus.com plans on having a national event featuring all
of the legends of drag racing from the old school, but not on the drag strip. In
fact they won't even have to strap into a car. This competition will be who can
tell the best war story.
Our readers will judge each winner by an online vote. We will select 16
individuals, some may be past or present racers, others may be promoters and
some may just be people in the sport.
Torco's CompetitionPlus.com will pair the storytellers through a random
reader vote competition. The highest vote getter will be the top seed and the
rest will follow. They will advance on a ladder just like a regular drag race.
With each winning round, the participants will spin a new yarn.

Donny Chavez has resigned his position as President of the West Coast
Hot Rod Association in order to pursue new challenges in his life for
2008. The WCHRA came to life at Speedworld Dragway in Surprise, AZ in
February of this year provided the west coast racers with another place
to race street legal style racing. The racing was intense through most
of the year and a couple of classes went to the season finale before a
Champion was crowned. Chavez explained his decision in a letter on the
WCHRA website that is published below.