Our friends at Ford Motorsports are conducting a trivia contest this weekend and participants will have the chance to win a $100 Visa gift
card.

Participants  can text "RACE" to 24365 any time before Sunday (the 23rd) at noon.  Trivia
questions will begin arriving after noon on Sunday. The person who wins the most
points by answering trivia questions quickly and correctly will win a $100 Visa
gift card.

Five-time NHRA Top Fuel winner Rod Fuller will pilot the yellow-and-black HOLT
CAT dragster during the 22nd annual O’Reilly Fall Nationals. David Powers
Motorsports and San Antonio-based HOLT CAT have partnered for the Dallas event, Sept. 20-23,
at Texas Motorplex, it was announced today. This is the eighth time that David
Powers Motorsports and a Caterpillar dealer group have joined to back Fuller’s
car this season.

The
relationship between David Powers Motorsports and the CAT dealer groups is a
program to increase technician recruiting. Caterpillar dealers are experiencing
a shortage of technicians and NHRA drag racing offers a technician-rich
recruiting environment to find qualified candidates with experienced mechanical
backgrounds. HOLT CAT is the largest Caterpillar dealer in the nation and
operates 22 locations throughout Texas from the
Red River to the Rio
Grande.

“I’m excited to have HOLT CAT on the car at Dallas,” Fuller said. “We
seem to get to at least the semis when we have a CAT dealer on our dragster and
that’s definitely the goal this weekend. We’ve been to the semis and finals at
the Motorplex the last two years, so now it’s time for us to get into the
winner’s circle. It’s going to be warm and our Caterpillar dragster runs well in
the heat, so we’re excited to get the points lead back and lock in a spot in the
Countdown.”

George Howard of George Howard Racing announced today that he has completed
the sale of New Bama Dragway in Sumiton, West of Birmingham.  Howard said that,
as of October 1, the track will be owned by Bernie and Anne Longjohn of Los
Angeles, California.  Howard had owned the facility since 1998.

The Good Book instructs parents to raise their children in the right way and when they are old, they will not depart. Eli and Bonnie Patrick instilled solid and positive values in their son Robert – honesty and IHRA Mountain Motor Pro Stock racing.

Those are two traits the second-generation Patrick proudly says he holds dear to his heart. The Fredericksburg, Va.-based driver has been on the fast track to success since entering the fast doorslammer ranks in the early 1990s.

“Where I lived the mountain motor cars were king,” Patrick said. “Growing up as a kid there were a lot of old tracks within an hour where the promoters booked in those cars. Whenever those cars came to town, because my dad had a dealership, they would display their cars at the shop. I was a starry-eyed kid. I never wanted to do anything but run like they ran. They had an impact on me. My dream was to be one of them.”

Patrick said that he dreamed one day of driving one of those IHRA Pro Stockers and his inspiration came from watching legends such as Lee Edwards, Rickie Smith, Roy Hill and Ronnie Sox.

While the NHRA event broadcasts were syndicated throughout the country,
the IHRA was on to a new deal with the Mizlou Network and then ESPN.
This one is worth watching if you prefer names like Don Prudhomme,
Raymond Beadle, Al Segrini, Connie Kalitta, Richard Tharp and Mark
Oswald.

Motel 6, the largest corporately owned and operated budget hotel chain
in North America, has renewed its contract with the National Hot Rod
Association (NHRA), continuing to serve as the Official Motel of the
NHRA through the 2010 NHRA POWERade Drag Racing Series season. 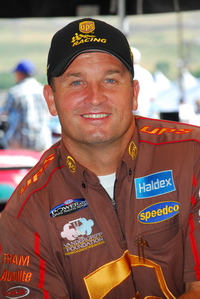 Bob Vandergriff, Jr. is
scratching his head trying to figure out the answer to a question that has been
bugging him for the last few races. The UPS-sponsored driver from Alpharetta, Ga., said he wants to know what it takes to
get on the event broadcasts.

Vandergriff said he
felt that he’s got all the ingredients that should garner sufficient airtime,
such as winning rounds and making the Countdown to the Championship. He said
that despite the logical qualifying factors, he feels he is being treated as an
outcast when it comes to the televison coverage.

“You have one of the
largest companies in the world on the side of our car as a sponsor and they
should want to feature that any way because it sends out a good message about
our sport,” Vandergriff said. “It’s a valuable asset within NHRA Championship
Drag Racing. The big picture is that it might inspire others to look and see UPS
involved and look into our sport. Evidently that doesn’t fit the
criteria.”

Vandergriff said the
situation came to a boil between he and the television team last weekend in
Memphis. He said
he voiced his displeasure to the television crew and then moved on. When they
came to interview him later, he said, “No way.”

Why would a driver turn
down television coverage? 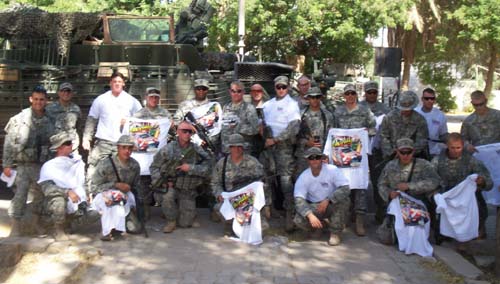 ...our
brave soldiers in Iraq hear about it and wear your shirt into combat
that day. They are proudly showing off their Mike Ashley Torco Race
Fuels "Fuel Doctor" shirts.

Lee McKinney sent us this photo of the 1st squadron. 2nd Stryker Cavalry regiment led by Capt. Andrew Steadman. They heading
out in the red zone on patrol with their strykers. McKinney provides security for what was once Saddam's palace. 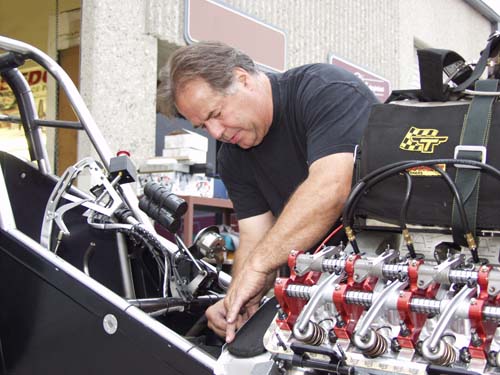 Bob Devour has purchased L&T Clutches from John Medlen, who has owned the company for the last eight years.

The
name L&T has long been recognized in racing clutch development and
manufacturing. Founded decades ago by the late Tony Miglizzi and later
supported by his talented son Lanny, the company was always at the
forefront of clutch technology.

For the second time this 2007 NHRA POWERade Drag Racing Series season, Jack
Beckman and the Mail Terminal Services Dodge Funny Car team will represent their
iconic sponsor Valvoline by running a Valvoline body on the MTS/DSR Funny Car at
this weekend's O'Reilly NHRA Fall Nationals at the Texas
Motorplex.

Beckman, who moved into second in the Countdown to Four
playoffs point standings following his runner-up finish in Memphis on Sunday,
with two races remaining to determine the final four, is a fan of all the
Valvoline products used by his team.

"I've used nothing but Valvoline in
all my own race cars since 1994," said Beckman. "I use Valvoline in my (Super
Comp) tow vehicle and in my passenger cars and have done that more than a dozen
years. And it's very easy to support a company that you feel that passionately
about their product and their people. And I'm sure that is also why more top
mechanics choose Valvoline."

For Beckman, having this competitive
advantage at the race track is just as important. "At 8000 horsepower in the
Funny Car, our Valvoline gets changed every run as the engine is torn apart. In
my passenger car I always change mine every 3000 miles."