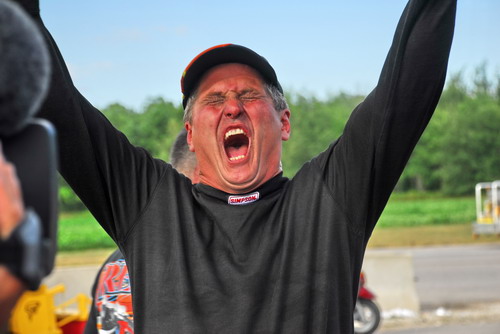 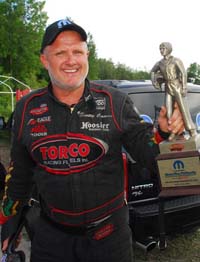 Scotty Cannon made his bones in the Torco’s CompetitionPlus.com Pro
Modified class, winning a record 28 national events and taking home six
world championships. At the Knoll Gas Nitro Jam event at Grand Bend
Motorplex Cannon was able to win another Ironman…but it was unlike any
of his previous ones.

Cannon stepped into a Top Fueler this season, driving Evan Knoll’s ’06
Hadman Dragster. Sunday during the Mopar Canadian Nationals presented
by Castrol he was able to break through and head back to the Winner’s
Circle for the first time in 10 years by stopping Jim Cavaleri in the
final round. Cannon clocked a 4.967 at 293.92 mph to better Cavaleri’s
5.071 at 256.06.

“I really have to thank the Canadian fans,” Cannon said. “They were
just incredible. It’s been 10 years since I’ve won one of these, but
this win was just as sweet as the last one.” 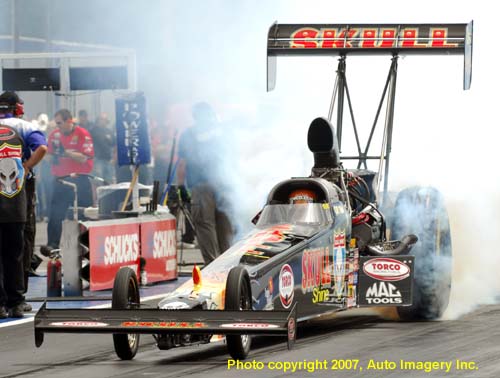 Due to persistent rain in the Seattle area, NHRA officials were
forced to set the elimination fields for the 20th annual Schuck's Auto
Supply NHRA Nationals Saturday evening after just one round of
professional qualifying was completed.

Drivers in the POWERade top 10 who were not qualified after the lone
round were placed in the bottom of the 16-car grids per rule. David
Grubnic replaced Morgan Lucas in Top Fuel, while Jim Head, Cruz
Pedregon, and Gary Scelzi will take the spots of Gary Densham, Tim
Wilkerson, and Jerry Toliver. 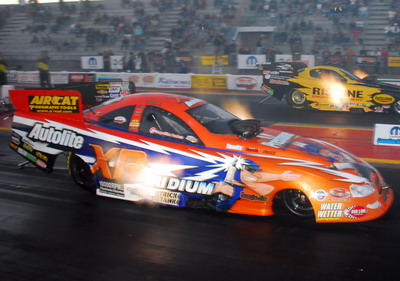 Bob
Gilbertson gave the standing room only crowd at Grand Bend Motorplex a
thrill. Gilbertson (Gastonia, N.C.) shot to the top of the Knoll Gas
Torco Racing Fuels Pro Nitro Funny Car qualifying sheet when he posted
a 5.011 at 258.91 mph in the Saturday evening qualifying session.

“Everyone
in Canada is pretty cool,” Gilbertson said of the huge Canadian crowd.
“Live Nation does a great job of putting these things on. I hope
everyone who came out today comes back tomorrow. We’re planning on
putting on a great show. We’re either going to blow it up, put it in
the wall or put it in the Winner’s Circle.” 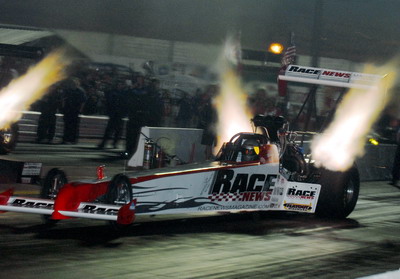 Haas, who is teamed with Erica Enders Pro Stock operation in 2007, was transported to in

The
cause of the problem is believed to be a stint that in place from his
first heart attack had become constricted. It was repaired and Haas is
resting comfortably in the Intensive Care Unit. Haas could be released
as early as this weekend.

J.R. Granatelli got crossed up during qualifying at the 2ND Annual Motive Gear NMRA/NMCA Super Bowl of Street Legal Drag Racing
Presented by Nitto Tire. He heads for the Route 66 Raceway Christmas tree on this errant launch. (Kelly Pelrine Photo) 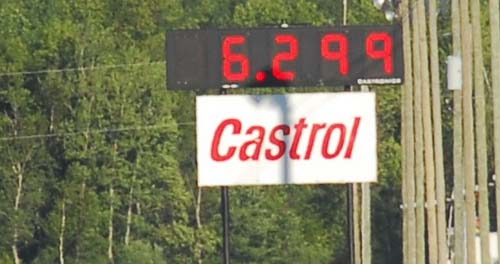 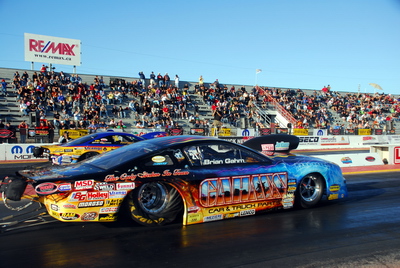 Brian
Gahm, of Lucasville, Ohio, has made a habit of doing things first. He
became the charter member of the Quarter-Max 6.40s club during the 2004
racing season. He then, after that club was filled up, was the first
Pro Stock driver to run in the 6.30s to become the initial member of
the Lenco Transmissions 6.30s club.

Friday, at Grand Bend Motorplex during the Mopar Canadian Nationals
presented by Castrol, the fifth event of the 2007 Knoll Gas Nitro Jam™
Drag Racing Series, Gahm did it again. His 6.299 pass at 220.66 mph was
the quickest Pro Stock pass in recorded history and made Gahm the first
member of the Jerry Haas Race Cars 6.20s Club.

No matter how young you might be you’ve certainly heard the expression
“He wears his heart on his sleeve.” That, in a nutshell, is 18-year
fuel racing veteran Whit Bazemore’s persona.

For whatever
reason, Bazemore has never been able to stifle his emotions. While some
have blistered him for his openness and personal honesty while usually
completely ignoring how beneficial that honesty has been for the sport,
others – apparently in the minority – have rallied to Bazemore’s
defense for those very reasons. Ironically, at a time when even some
within the NHRA management team have decried the complete lack of
personal rivalries within the sport, when an individual like Bazemore
steps to the forefront with a willingness to speak his mind on any
number of subjects there are legions of fans who appear appalled at his
having done so.