GM Performance Parts GTO driver Warren Johnson’s historic induction into the International Motorsports Hall of Fame (IMHOF) will be broadcast this Sunday, May 13 on the Speed Channel.

For those who have served our nation, a grateful sport says "Thank You"

In the 1960s, America's muscle-car craze just about guaranteed that the growing National Hot Rod Association had the attention of young men 18-30 years old. Then the Vietnam War hit and the weekend warriors became simply warriors.

That turn of events plunged the nation into protest, angst, and divisiveness. It left scars on many of those one-time drag-racing enthusiasts. A lost interest in quarter-mile competition became the least of their worries.

But NHRA team owner Evan Knoll has been able to heal some of those hurts that have lingered for nearly 40 years. One of his drivers, Melanie Troxel, is rallying America's once-maligned or forgotten soldiers this season with the Vietnam Veterans/POW MIA Dragster.

And at Madison, Illinois, last weekend, she recorded her third career Top Fuel victory but her first for the veterans in Knoll's tribute dragster. She also improved from ninth in the standings to fifth, in ideal position to qualify for the Countdown to the Championship.

RON CAPPS ON RACING IN PRELUDE TO THE DREAM

Funny Car racer Ron Capps is not a man of few words. Ask him a question and you will get his deepest, most emotional and sincerest thoughts on any subject. We asked the 2007 NHRA POWERade Drag Racing Series Funny Car points leader (after seven races) to describe what it means to him to be invited for the third straight year to compete in the Nextel Prelude to the Dream at Eldora Speedway in Rossburg, Ohio, on June 6.

Thu, 2007-05-10 16:00
Drag racing sponsor icon and Torco Race Fuels founder Evan Knoll presented the
Vietnam Veterans with a tribute during the 2007 season. An appreciate veteran
has returned the favor.
Denny Fenstemaker of Valdosta, Ga., fought back the tears as he opened a
tattered blue gift box. Inside the box was his Vietnam Service Medal. He
presented the medal to Knoll as a taken of appreciation for Knoll’s
generosity.
“This means a lot to Vietnam veterans,” said Fenstemaker. “This provides
not only a homecoming for us but one for our 58,000 brothers who didn’t make it
back. I just feel that he is one of us for doing this. The feeling that has gone
into this and the feeling the veterans get out of it … by just looking at it,
gets to you. It’s like seeing the Vietnam Veterans wall for the first time. It
makes that much of an impact. 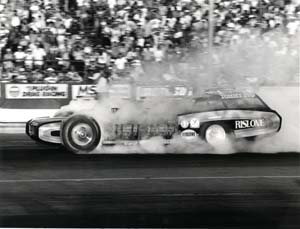 In the golden years of drag racing two of the most notable names were
"TV Tommy" Ivo and "Big Daddy" Don Garlits. Those two legends in the
sport will join together at the Holley NHRA National Hot Rod Reunion,
presented by SoffSeal – and they're bringing their cars to the
three-day fanfest, June 15-17 at National Trail Raceway near Columbus,
Ohio.

"Garlits and Ivo match raced hundreds of times in the 1960s and '70s,"
said Tony Thacker, executive director of the Parks Museum, "often
racing at one track, then towing 500 miles overnight to get to the
next. "We're very pleased that they've chosen to come and bring their
cars to the event so that their fans old and new can see them 'up close
and personal.'"

Garlits, who has participated in each of the past four National Hot Rod
Reunions, will bring one of his famous Swamp Rat front engine dragsters
to the event, which is produced by and benefits the non-profit Wally
Parks NHRA Motorsports Museum, presented by the Auto. Club of So.
Calif. He was the No. 1 driver in the NHRA's list of the top 50 drag
racers of all time. Garlits was the first to exceed 200, 240, 250, 260
and 270 mph in the quarter mile. He was also the first to win three
NHRA U.S. Nationals titles and three world championships. His event
victory total is a staggering 144. Garlits built at least 30 cars with
the "Swamp Rat" name and he's brought different versions to the
Reunion. 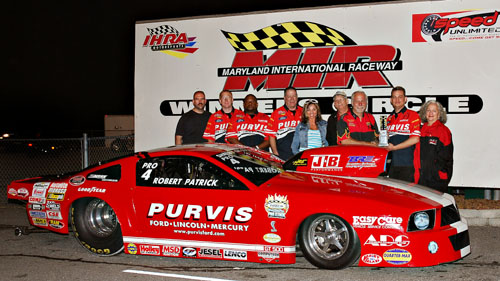 ADRL BATTLE FOR THE BELTS UPDATE

Joshua Hernandez and Johnny Pilcher not only won event titles last
weekend at the Flowmaster American Drag Racing League's Camp
Motorsports Georgia Drags, they also emerged as the big winners in the
ADRL's AlphaTrade Battle for the Belts points competition.

With
his win Saturday afternoon at the rain-delayed ADRL World Finals (which
were completed at the Georgia Drags), Hernandez moved from third place
to first in the Battle for the Belts Pro Extreme standings. Later that
night, Pilcher claimed his second career ADRL title with a win over
Rickie Smith in the Georgia Drags Pro Nitrous final to jump from fourth
to first in the class' standings.

In Extreme 10.5, Rodney Rosenstiel reached the Georgia Drags semifinals and maintained his lead in the points chase.

The
2007 AlphaTrade Battle for the Belts eliminators, scheduled for Friday,
Oct. 12 in Kennedale, Texas, will determine the ADRL's season
champions. The top eight points-earners in each of the ADRL's
professional classes at the completion of the ADRL Eastern Race Fuels
DRAGSTOCK IV event (Sept. 14-15) automatically qualify for the
championship eliminators. For a complete breakdown of how drivers earn
points in ADRL competition, visit http://www.adrl.us/rules.html.

Following
is a look at the AlphaTrade Battle for the Belts competitions through
three of eight events on the 2007 points-scoring calendar.

NO TRUTH WHATSOEVER TO BRISTOL RUMORS

Earlier today rumors began circulating that Bristol
Dragway’s surface had been somehow compromised, and that next weekend’s NHRA
O’Reilly Thunder Valley Nationals would be either cancelled or
re-scheduled.

Nothing could be further from the truth.  The race will take place as scheduled, and if the new
concrete pad performs up to predictions, you can expect record-setting elapsed
times and speeds.

A message was forwarded to us from Steve Gibbs. Gibbs is putting
together a new 392 engine for the Howard Cams Rattler. He is trying to
locate a set of Donovan exhaust rockers. Contact us with your name and
number and we will ensure that he gets it. - DONOVAN EXHAUST ROCKERS